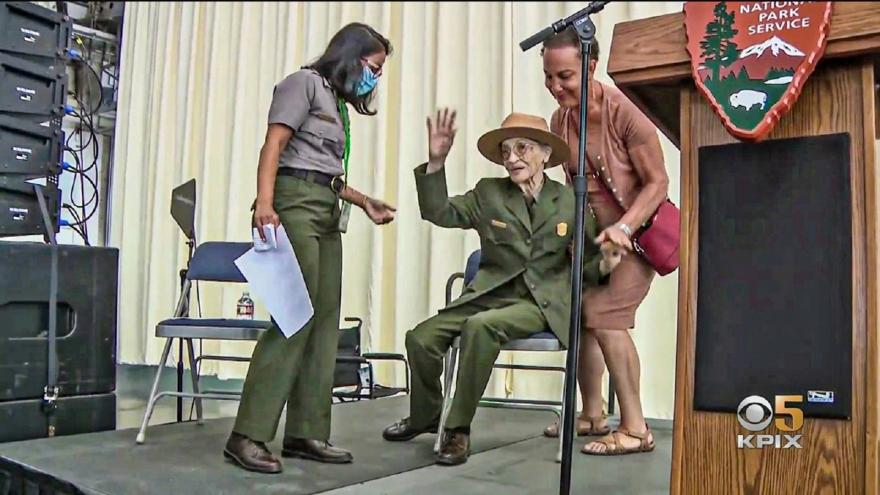 RICHMOND, California (KPIX) -- Betty Reid Soskin, America’s oldest park ranger, has retired from her job at the Rosie the Riveter World War II Home Front National Historical Park and, on Saturday, hundreds turned out in Richmond to thank her for the example she set for the country.

“She’s such an inspiration to everyone,” said Joan Mah as she penned a personal message to the 100-year-old former park ranger. “I wished her well on her birthday and her retirement and I actually put that if the world had more Betty Soskins, we’d be a much better place to live.”

Betty was a young woman when World War II began. She served on the homefront and has been an eyewitness to the rise of America as world superpower. It was that lifetime of experience that made her so valuable at the park according to her former supervisor, Kelli English.

“How do you supervise someone like Betty?” English laughed.

Betty also experienced growing up Black in America and, with a gentle brand of activism, she pushed the Park Service to present an honest view of history, even if it wasn’t always upbeat.

“We’ve taken a lot of lessons from that — not just for Rosie but even started applying them more broadly throughout the National Park Service, in terms of making a major shift in how we talk about history and making sure that we are speaking to all Americans when we are doing so,” English explained.

The director of the National Park Service, Charles Sam, attended Saturday’s ceremony and said that Betty’s influence has changed the way history is interpreted at every park in the country.

“We are grateful you decided to serve as a park ranger, shedding light on this country’s past and telling previously untold stories,” he told Betty. “I want to thank you for helping us fulfill our mission and thank you for your unwavering resolve for service to this great nation.”

As she received her traditional “arrowhead” retirement plaque, Betty thanked those she has inspired for giving her inspiration in return.

“I just have no way of thanking you for being here … always,” she said. “Because I think you have always been the wind beneath my wings always. Thank you very much.”

The park says that, although Betty will no longer be an official ranger, she will still hold informal online chats including one scheduled for Thursday, April 21.