Hundreds are urged to evacuate due to wildfire near Flagstaff, Arizona, as thousands more are told to prepare to leave 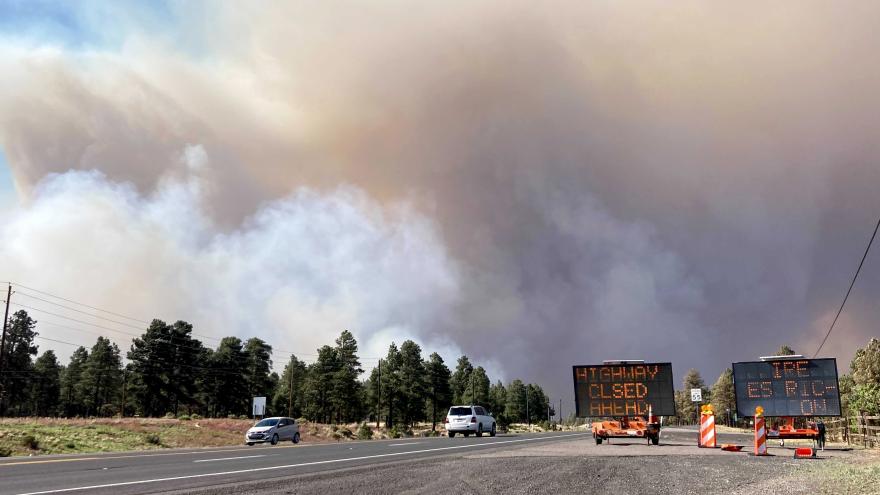 (CNN) -- A wildfire burning just six miles north of Flagstaff, Arizona, has prompted evacuations for hundreds of people, and thousands more have been told by authorities to prepare for future evacuation, authorities said Sunday night.

The Pipeline Fire was first reported by a fire lookout at around 10:15 a.m. Sunday and has grown to 4,500 acres, according to InciWeb, a US clearinghouse for wildfire information. Burning slightly west of Schultz Pass, the blaze is active on all sides and continues to grow, InciWeb said.

As of Sunday night, no homes or structures had been destroyed, InciWeb said.

While the cause of the blaze is under investigation, authorities arrested a 57-year-old man Sunday in connection with the fire, the Coconino County Sheriff's Office said in a news release.

After responding to a report of a fire off Snowbowl Road, deputies were told there was a white pickup truck seen leaving the area of the Pipeline Fire, the release said. Deputies stopped a vehicle matching the description and arrested the driver. The man was charged with federal natural resource violations, the release said, but regulations prohibit his name, photo or charges from being released.

CNN has reached out to the sheriff's office for more details about the arrest.

Less than two months ago, hundreds of households in Flagstaff were forced to evacuate due to the Tunnel Fire, which burned about 14 miles northeast of the city. The fire, which began April 17, ultimately burned about 19,000 acres, according to InciWeb.

A shelter for displaced families has been set up by the American Red Cross at Flagstaff's Sinagua Middle School, which also hosted the evacuation site for the Tunnel Fire.

In total, 270 fire personnel are battling the Pipeline Fire, which has more than quadrupled in size since Sunday morning. As many as eight air tankers and five helicopters were deployed Sunday to combat the growing flames and more are expected to join the efforts Monday, according to InciWeb.

An Incident Management Team is expected to arrive Monday to assume management of the wildfire and supply additional resources and personnel, InciWeb said in a release.

2022 early fire season most active in a decade

As of Monday, nearly 30,000 wildfires have burned around 2.5 million acres across the US so far this year, which exceeds the pace of any year over the past decade, according to statistics from the National Interagency Fire Center.

This makes 2022's early wildfire season the most active in a decade, and the third since records began in 1999, behind June 11 when a record 4 million acres burned, and 2.7 million acres burned in 2006, according to NIFC spokeswoman Sheri Ascherfeld.

"Climate change has brought longer fire seasons, which we now call 'fire years,'" Ascherfeld said. "We are witnessing wildfire behavior, fueled by severe drought and high winds that now characterize the summer months, that has never been encountered before."

Wildfires are now happening in different parts of the country, burning more land on average each year, and becoming more extreme, she said.

President Joe Biden traveled to wildfire-devastated New Mexico this weekend, where crews are still battling the largest and second-largest fires on record in the state.