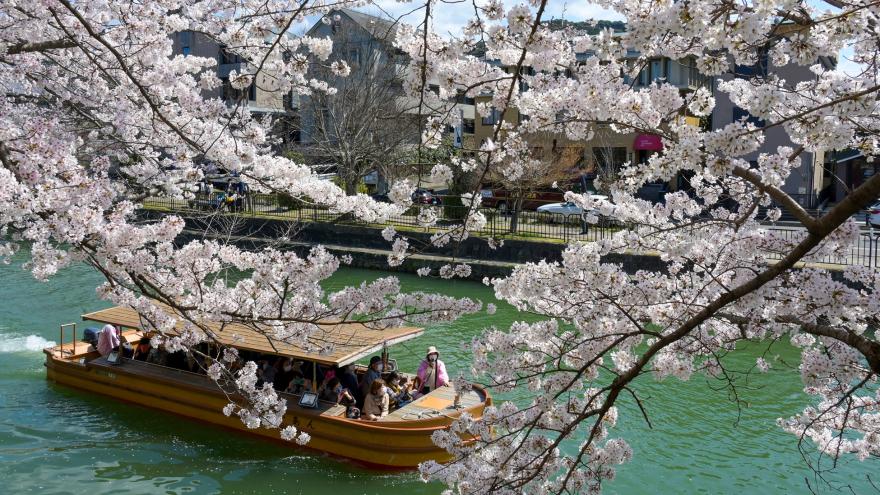 (CNN) -- Every spring, crowds flock to admire Japan's cherry blossom -- a dazzling pink and white bloom that has been revered in the country for more than a thousand years.

But the world-famous sakura plants are flowering much earlier than normal due to human-induced climate change, a new study has found.

Researchers from the Met Office in the United Kingdom and Osaka Metropolitan University in Japan say the climate crisis and urban warming have pushed forward the "peak bloom" flowering period by 11 days.

In 2021, cherry blossoms in the historic central city of Kyoto peaked on March 26 -- the earliest full flowering date in 1,200 years. This year, the cherry blossoms burst into color on April 1.

The scientists, who published their findings in the journal Environmental Research Letters on May 20, said that extreme early flowering of the cherry blossoms is now more common.

The trend of earlier peak blooms coincides with rising temperatures. Average March temperatures in Kyoto city center have increased by several degrees since pre-industrial times, under the influence of both climate change and urban warming, the scientists observed.

Part of the reason is increased urbanization. Cities tend to be warmer than surrounding rural areas because buildings and roads absorb the sun's heat more than natural landscapes -- a phenomena known as the heat island effect.

But scientists say a bigger reason is the climate crisis, in which the burning of fossil fuels has caused rising temperatures across the region and the world.

If planet-warming greenhouse gas emissions continue as they are, by the end of the century Kyoto's cherry blossoms could start arriving even earlier -- by almost another week, the study found.

"Our research shows that not only have human-induced climate change and urban warming already impacted the flowering dates of cherry blossom in Kyoto, but that extremely early flowering dates, as in 2021, are now estimated to be 15 times more likely, and are expected to occur at least once a century," said lead author and Met Office climate scientist, Dr. Nikos Christidis.

"Such events are projected to occur every few years by 2100 when they would no longer be considered extreme."

Earlier cherry blossoms have wider ramifications for Japan's economy and ecology, and are a symptom of the larger climate crisis threatening ecosystems everywhere.

"Spring cherry blossom flowering is a culturally significant event in Japan," said contributing author Yasuyuki Aono, from Osaka Metropolitan University. Spring festivals that accompany the blooms are an important contributor to the local economy, so being able to predict the bloom's timing can be critical.

The peak bloom period lasts just a few days. During this period, hanami -- Japanese for "flower viewing" -- is a popular activity.

It is common for locals and tourists alike to have picnics under the cherry trees, and businesses will sometimes offer special set meals or products during the week.

But it's not just a matter of tourists scrambling to catch peak bloom before the petals all fall -- it could have a lasting impact on entire ecosystems, and threaten the survival of many species.

The impact of rising temperatures on nature's calendar has trickle-down effects on farming and land management practices in the country, the study said.

It also impacts plants, insects and animals, which rely heavily on each other for their development and life cycles. A change to this cycle can initiate a chain reaction, causing damage to ecosystems.

For instance, plants sense the temperature around them and if it's warm enough for a consistent period, they start to flower and their leaves start to emerge. Similarly, higher heat can cause faster growth in insects and other animals.

Different plants and insects may respond to the rise in heat at different paces, throwing their life cycles out of sync. Whereas they once timed their growth simultaneously each spring, now flowers may bloom before insects are ready, and vice versa -- meaning there may not be enough food for the insects or plants.

The change in flowering dates isn't limited to Japan or to cherry blossoms. This year, spring came early in parts of the United Kingdom and climate change is making plants across the British Isles flower, on average, a month earlier than they used to, according to a recent study.

The same phenomenon is already happening to many crops and economically valuable plants -- posing big problems for food security and farmers' livelihoods.