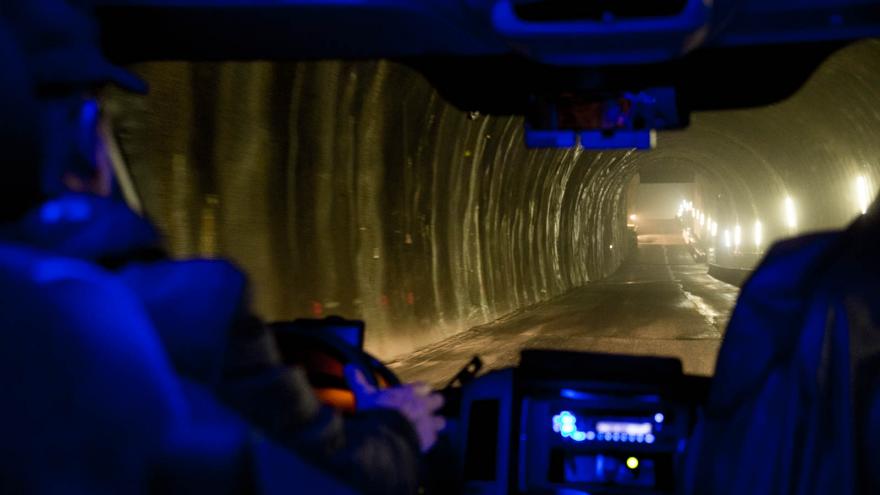 (CNN) -- Thousands of feet beneath the Swiss Alps, a massive engineering project years in the making is reaching its final stages after a huge new tunnel was opened.

The Ceneri Base Tunnel, just short of 25 miles in length, is the final section of a new high-speed, high-capacity railway that plunges deep under the mountains of Europe in an effort to drastically reduce transport times across the continent.

It's a landmark moment in the development of trans-Alp rail links which are set to become operational in December 2020. "It's the last part of the puzzle," Vincent Ducrot, the chief executive of Swiss Federal Railways, told reporters at an opening ceremony last week, according to Reuters. "The goal to have a flat line through the Alps has been achieved."

The CBT, one of a trio of new tunnels, creates an uninterrupted rail route from the Dutch North Sea port of Rotterdam to the Italian city of Genoa on the Mediterranean. 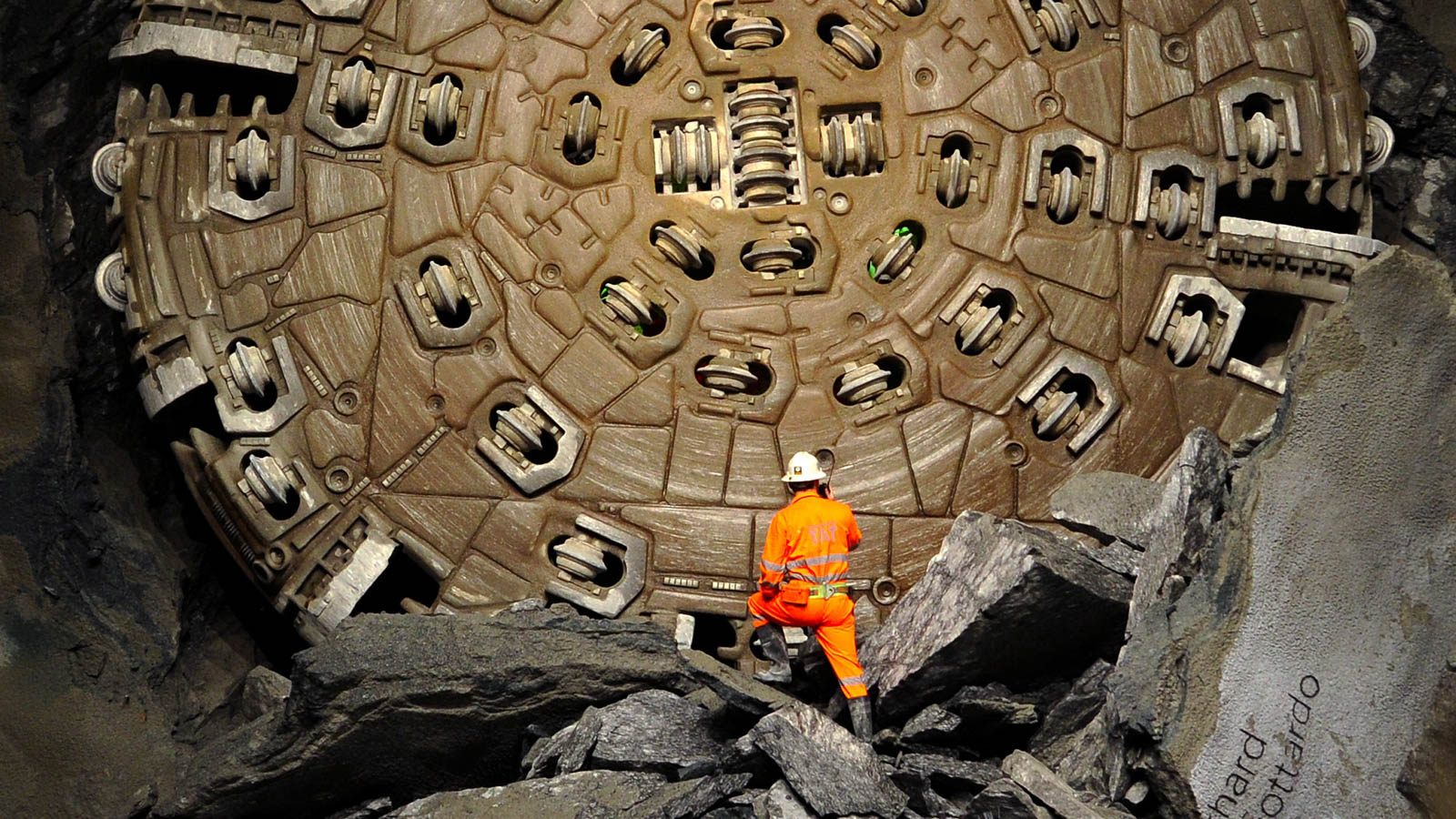 At its heart is the world's longest railway tunnel -- the 35-mile-long (or 57-kilometer) Gotthard Base Tunnel.

Everything about this $11.3 billion project is on a grand scale; at their deepest point, the GBT's twin tunnels are around 8,000 feet below the Alpine peaks. More than 2,500 people worked on its construction, carving and blasting their way through almost 30 million tonnes of granite before laying almost 250 miles of steel rails and installing thousands of miles of cables for power, signaling and communications systems.

With cross passages between the main tunnels every 1,066 feet, access tunnels and shafts the total length of the tunnel system is more than 95 miles.

Excavation of the two 35-mile running tunnels was completed in 2011 and employed a combination of traditional drilling/blasting and massive tunnel boring machines with 32-foot diameter cutting faces and miles of conveyor belts to carry rock away for recycling.

Excavation on this scale generated extraordinary quantities of rock and spoil; the rock from the Gotthard tunnels alone would have filled a train of wagons stretching from Zurich to Chicago -- a distance of 4,440 miles.

A further eight million tonnes has been excavated from the new Ceneri Base Tunnel further south.

Deep within the tunnels, two cavernous "multi-function stations" at Sedrun and Faido allow trains to cross between the two tunnels while maintenance is taking place or in case of emergencies.

Sedrun was intended to become by far the world's deepest underground passenger station, known as Porta Alpina, with 2,600-foot-deep elevator shafts linking the platforms to the villages above, but the plan was dropped as uneconomic in 2012.

First proposed as far back as 1947, a new "flat" route through the Alps was backed by a Swiss national referendum in 1992 and test drilling started a year later.

When the shorter, but equally important Ceneri Base Tunnel, near Lugano, sees its first trains at the end of 2020, the final piece of the jigsaw will be in place.

This 9.5-mile-long CBT eliminates the remaining "mountain" section of the busiest north-south route between the economic powerhouses of northern Europe and northern Italy.

Journey times for international travelers between Zurich and Milan will be slashed to just two and a half hours, compared with four hours via the old Gotthard route, with passenger trains traveling at up to 125 miles per hour through the tunnels.

Remarkably, by avoiding the famous spirals of the old mountain route, the GBT shortens the distance between Zurich and Milan by 25 miles. Shorter journey times meant that passenger numbers increased by 30% in the months after it opened.

"The Gotthard Base Tunnel cuts 40 minutes from the journey between Zurich or Basel and Milan, ensuring rail remains the mode of choice between Zurich and Italy," Mark Smith, a rail travel expert better known as "The Man in Seat 61," told CNN earlier this year.

"Those of us who remember the old route will miss the journey 'over the top' on the spirals of the old high-altitude Gotthard line, but it remains a scenic route with great views."

Heading south, the journey remains much the same, skirting the lakes of Zurich and Zug, passing the home of the world-famous Swiss Army knives at Schwyz before sweeping along the eastern shore of Lake Luzern -- known locally as the Vierwaldstaettersee -- towards Altdorf, the home of William Tell and the northern portal of the base tunnel.

Whereas the mountain route had -- and still has -- the power to distract even the most jaded passenger, the primary sensations of the base tunnel are the sudden change of ambient sound, and a noticeable acceleration when the new section is reached. For regular travelers, heads buried in spreadsheets, answering emails or watching movies, the transit through the GBT barely registers nowadays, so routine has this engineering marvel become.

There's no sensation of being 8,000 feet below the Alpine watershed as tunnel lights flash past at 125 mph, although in the tube itself, temperatures can reach 104 F (40 C) at this depth and huge fans blow cooling air through the tunnels to maintain a more comfortable atmosphere.

Twenty minutes later, the sunlight on the southern side can be dazzling as the train bursts out of the Bodio portal and into what, on some days, feels like a different world. The Italian-speaking canton of Ticino enjoys a kinder, more Mediterranean climate than its neighbors "over the hill," with palm trees and vineyards providing a stark contrast to the northern European weather and formidable granite valleys we left behind so recently.

The major beneficiaries of the new tunnel are freight companies which will gain more capacity, lower costs and shorter journey times on this key trans-European axis -- and the Alpine communities along the old line who have been blighted by the noise of heavy rail traffic for decades.

Gentler gradients now allow heavier freight trains to run unassisted through Switzerland and increase capacity from the old limit of 140-180 trains per day via the mountain route to 220-260 daily.

Eventually, this is expected to more than double the route's annual transport capacity from 20 million to around 50 million tonnes. 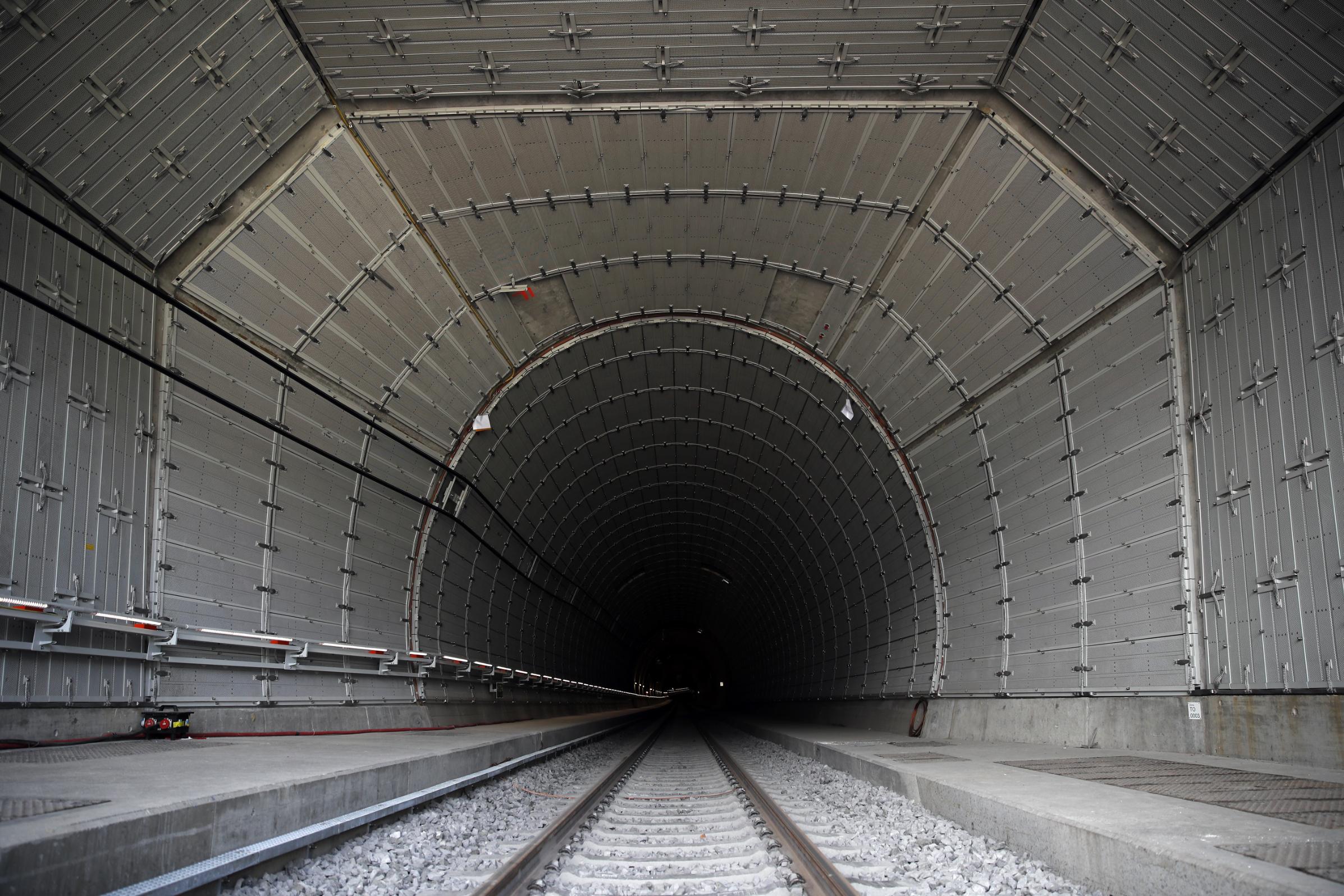 Keith Barrow, editor of Today's Railway Europe, is under no illusions about the value of the new railway.

"The GBT and Ceneri tunnels are a project of international significance," he says. "They overcome a major historical constraint on the main north-south rail axis across the Alps. The Swiss have made a big investment in smoothing the flow of freight between Europe's major economies while ensuring rail remains a competitive option for moving goods."

As well as the GBT, a second base tunnel is also in operation further west, linking Basel, Bern and Milan. The 21.5-mile Lötschberg Base Tunnel has provided a shorter, flatter and more direct route under the Bernese Alps since 2007.

To protect its sensitive Alpine regions from increasing road traffic, and the even greater traffic expected in the future, the Swiss Federation is working to transfer freight from road to rail wherever possible.

The Lötschberg route carries a large volume of freight on trains known as the "rolling motorway," where complete articulated trucks are carried on specialist low-floor wagons between southern Germany and the north of Italy, bypassing the congested trans-Alpine motorways.

Neighboring Austria also finds itself in a strategic location between Europe's industrial giants and has embarked on a similarly ambitious program of tunnel building to liberate its Alpine valleys from heavy freight traffic. Tens of billions of dollars are being invested in base tunnels and massive upgrades of the main rail routes linking them to Germany and Italy.

For centuries, the Brenner Pass has been the primary trade route between wealthy Bavaria and northern Italy.

When the 39.7-mile, $6.6 billion tunnel system is completed in 2028, it will take the GBT's crown as the world's longest rail tunnel. It will provide a flatter, more direct route under the Tirol Alps and allow freight trains to bypass the city of Innsbruck. Journeys from Innsbruck to Bolzano in Italy will be cut from two hours to just 50 minutes.

South of Vienna, the oldest and most celebrated railway across the Alps is also being bypassed. The 17-mile, $3.65bn Semmering base tunnel will create a new, faster route from the Austrian capital and central Europe to the Adriatic when it opens in 2027.

Opened between 1848 and 1854, the current mountain railway was the first to traverse the Alps and is now a UNESCO World Heritage Site.

Construction projects of this magnitude are not without their critics or difficulties, though. All these new tunnels look set to be delivered later than planned and cost significantly more than their original budgets.

All have their opponents too, whether political, environmental or from the communities affected by these massive construction projects.

Perhaps the starkest example of this is the controversial new 170-mile railway between Lyon in France and Turin in northern Italy.

At the heart of this $27.7 billion mega-project is a $9 billion, 36-mile base tunnel to replace a difficult mountain route through the Savoy Alps.

Legal challenges, political opposition and protests, occasionally violent in nature, have beset this project from the outset, particularly on the Italian side.

Civil engineering work started as far back as 2002, although tunneling did not commence until 2016 and is expected to last 10 years. If the high-speed access lines either side are completed as planned, Paris-Milan TGV journeys could eventually be cut from seven hours to just four.

Whatever the arguments for and against these mega-projects, the move towards more environmentally friendly forms of transport combined with the ever-present demands for increased efficiency and lower costs ensure that this new generation of tunnels under Alps will play a major role in the development of Europe's economy and travel industry over the coming decades.

This story was first published in February 2020, it has been updated.