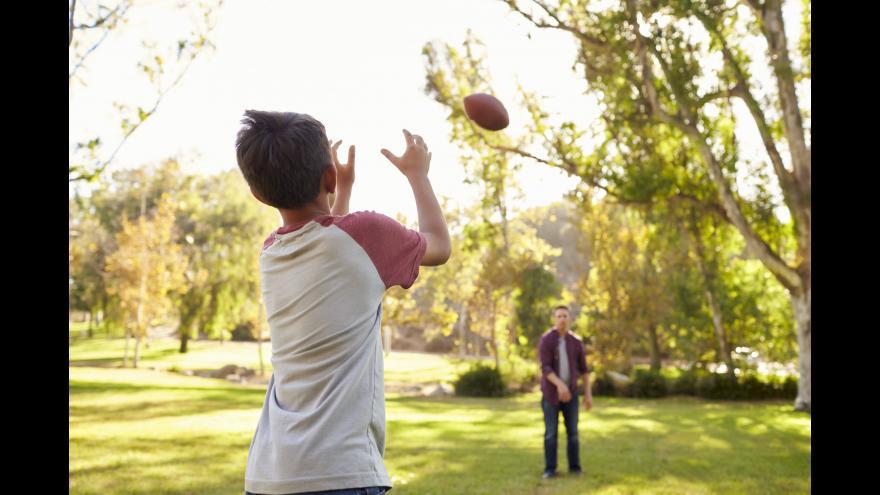 This stock photo shows a father and son tossing a football.

(CNN) -- Imagine if a photo of you, without your knowledge or consent, began appearing in advertisements around the world?

That's what happened to actor B.J. Novak, best known for his role in "The Office," whose face has been used to sell everything from face paint in Uruguay to Calvin Klein cologne in Sweden.

Novak said in an Instagram post he believes his unpaid role as an international pitchman started after his photo was mistakenly added to a public domain website. He also said he's too amused to do anything about it.

But his example raises questions for the rest of us about copyright issues and the potential misuse of images in the social media age, when personal photos can be reproduced and repurposed all over the internet.

To better understand this complex minefield, we asked two experts to explain.

What does public domain mean?

Public domain is an intellectual property term referring to creative works -- photos, movies, music, etc. -- that are not protected by copyright law and thus available for anyone to use free of charge and alter as they wish.

In such cases, no permission is needed to use the content.

It's unclear how Novak's photo entered the public domain. He has provided few details and has not commented on its use.

No. Even on social media, the use of your photographs is limited by copyright law and by the terms and conditions of the platform where you post them.

"When you sign up for a social media platform, you agree to that site's terms and conditions ... essentially a contract governing -- among other things -- what the site can and cannot do with the stuff you post," said Meredith Rose, a senior policy counsel and copyright expert for Public Knowledge, which promotes freedom of expression and an open internet.

"It is industry standard for part of that agreement to say, 'whatever you upload, you give us permission to show to the world, as well as make incidental copies on our servers to allow for things like retweeting/sharing functions/etc.,' " she said.

That permission is referred to as a license, and it varies with different platforms.

"But fundamentally you, as the user, have given limited permission to the site for it to display, transmit, and reproduce the work you've uploaded," Rose said.

Do I own the copyright for photos of myself?

You don't -- unless they are selfies.

The photographer holds the copyright, Rose said. That's why Kendall Jenner was sued by paparazzi for posting their photos of her on social media.

"The fact that a person is pictured in a photograph does not give that person any measure of ownership in the copyright of the photograph, nor any right to make use of the photograph," said Jeffrey Sedlik, a professor at the Art Center College of Design in California and an expert in copyright law.

In 24 states, the person in the photo may have a "right of publicity" -- which prevents the unauthorized commercial use of someone's name or likeness, Sedlik said.

That protects the person if their photo is used to appear as if they're endorsing something.

A person may have a right in some states, under certain circumstances, to restrict a photographer's ability to commercially exploit their likeness, Sedlik said. In some states only celebrities have this right, he added.

But right of publicity is not the same as copyright protection.

"Copyright is designed to incentivize the artist pushing the shutter button, not the model in the photo itself," Rose said. "The exception to this rule is the selfie, where the subject is also the photographer -- and as the photographer, they hold a copyright in this photo of themselves."

Of course, copyright law or a platform's terms and conditions can't stop someone from snatching your photo and reposting it for their own purposes.

Could what happened to Novak happen to anyone?

"It's certainly more likely for folks who have modeled professionally, especially for stock photographs," Rose said.

Stock photos are generic images that are licensed for use by individuals or organizations. For example, a news article about birth rates may use a stock photo of a newborn.

"But the practical constraints of what makes a photo good to use as a stock photo, or what qualities make it useful for designers to extract and put on labeling (color balance, composition, etc), are pretty specific," Rose added.

"Because of that, I don't think there's any risk that, say, your old high school candids will be used to hawk electric razors."

But could an image of me end up in the public domain?

Eventually. But you may not be around to see it happen.

In the United States, images are protected by copyright during the photographer's life and for 70 years after their death. After that, the photograph enters the public domain.

"For example, an unpublished photograph created in the late 1800s by a photographer who passed away in 1952 could still be fully protected by copyright in 2021, 69 years after the photographer's death," said Sedlik, who's also a photographer.

The copyright term is different when a photograph is created by a corporation or an anonymous person.

What happens after a copyright expires?

The work then enters the public domain -- essentially meaning anyone can use it without the consent of the creator.

But this wasn't always the case. Prior to the 1970s, copyright wasn't automatic. One had to register a work at the US Copyright Office for a shorter term and manually renew it once the term was up, Rose said.

As an example she cited the 1946 Jimmy Stewart film, "It's a Wonderful Life." The studio forgot to renew its copyright and it slipped into the public domain, where it has remained ever since.

That explains why the movie airs on TV every Christmas, Rose said, because television stations don't have to pay anyone to show it.

Have things evolved with the digital world?

In the age of Instagram and Twitter, people are constantly reposting others' photographs, modifying images and sharing memes. The law has not kept up with social norms around sharing, remixing and content consumption online.

"The core structures of copyright law rely on some basic assumptions about who is creating material, how they're creating it, how that material will be released into the world, who will consume it and under what conditions," Rose said.

"Specifically, it baked in assumptions that you had a very linear path from a work's creation, through publishing channels, and then into the hands of consumers -- and that in most cases, that's where the path stopped. It was a one-way arrow with a clear start and end point."

So technically, people are constantly violating copyright law without realizing it, Rose said.

"That's the social norm around how we use the internet today, and in the vast majority of cases, these practices are seen as harmless," she said.

What can you do if your photo ends up in an ad without your consent?

Photographers can send a takedown notice under the Digital Millennium Copyright Act, a federal law that protects copyright holders from online theft.

"Takedown notices are very easy to send -- arguably too easy," Rose said. "They have been widely abused to remove things for a variety of non-copyright reasons." Even repressive regimes have used them to censor activists.

In Novak's case, it's unclear who the photographer was and whether they sent a takedown notice.

Sedlik said the right of publicity law -- which prevents the unauthorized commercial use of someone's likeness -- varies in different countries, making enforcement across borders complex and expensive.

To protect themselves, the subject of a professional photograph can retain some control by negotiating that clause into their contract with the photographer, Rose said.