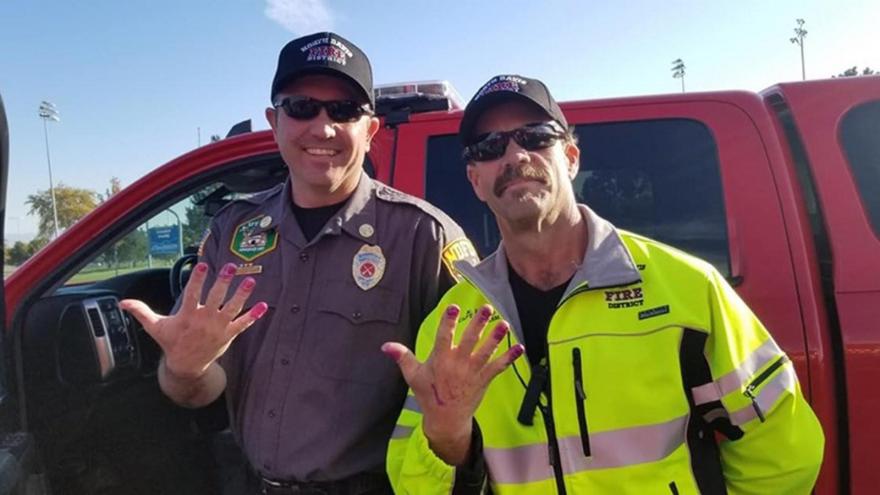 (CNN) -- Two firefighters in Utah are melting hearts after they let a child give them purple manicures to help keep her calm after a car accident.

Battalion Chief Allen Hadley and Capt. Kevin Lloyd with the North Davis Fire District were at the scene of the accident Saturday when they saw a little girl who seemed scared, the department wrote on Facebook.

The accident happened in the northern city of Clearfield, according to the Associated Press, and no one was seriously injured. As medics examined the girl's mother, the firefighters focused on distracting the child.

Hadley and Lloyd noticed she was holding bottles of nail polish, so they started talking to her and asked whether she would paint their nails, the department wrote.

"Within minutes, the child was calmly paining their nails and had forgotten about the accident she had just experienced," the department said. "Great job Chief Hadley and Captain Lloyd for providing awesome customer service to one of our young citizens."

CNN called the department for more details on the incident but did not receive an answer.

Fire Chief Mark Becraft commended the two firefighters on exemplifying the values of the department, including safety, compassion and customer service.

"Kudos to these great guys that serve our community, it's just the little things that make a huge difference," he wrote in response to the Facebook post.

Members of the community also praised the two men.

"What a wonderful teaching moment. Handled with grace and understanding. My hat is off to the two of you," one person wrote.

Others joked about the situation, offering up some helpful tips.

"Bat. Chief Hadley and Capt. Lloyd, you should wear that color more often, it makes your uniforms look even better!" one person said.

"So pretty! You'll be glad to know we now have a LARGE bottle of polish remover in Dispatch for the next time," another wrote.