How Trump will hand off the 'nuclear football' to Biden 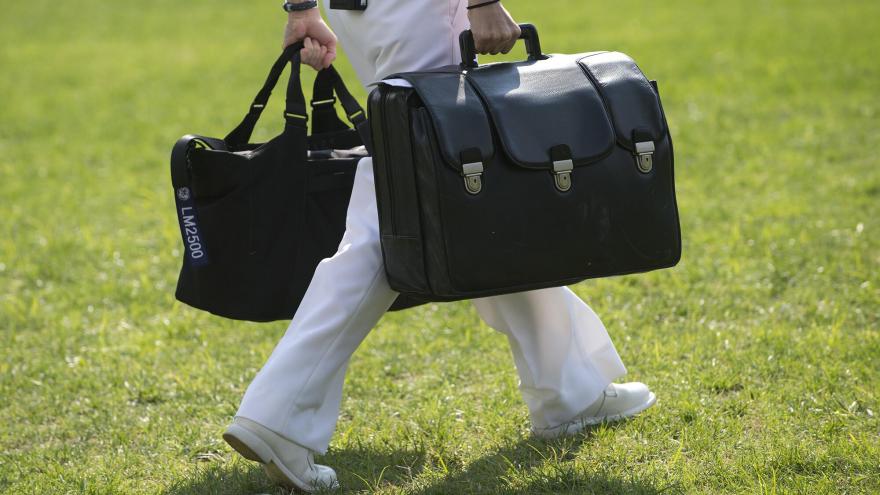 A White House military aide and member of the US Navy carries a briefcase known as the "football," containing emergency nuclear weapon codes, as US President Barack Obama departs on Marine One from the South Lawn of the White House in 2012.

(CNN) -- President Donald Trump will not be in attendance Wednesday to watch as his successor Joe Biden is sworn into office, but his absence will have little impact on what may be one of the most important moments of Inauguration Day, the handing off of the "nuclear football."

The "football," which contains the equipment that Trump would use to authenticate his orders and launch a nuclear strike, is carried by a military aide who accompanies the President at all times -- up to the second he officially leaves office on January 20.

Typically, the football would be handed off to another military aide standing on or nearby the inauguration viewing stand as Biden takes his oath of office.

But on Wednesday, that exchange will happen a bit differently as Trump is currently expected to depart Washington, DC, for Florida before Biden's inauguration ceremony.

The nuclear football will likely travel with him, experts say, meaning there will be at least two briefcases in different locations, presenting a unique challenge of ensuring the transfer of authority goes smoothly.

While that process may play out slightly differently than it has in years past, there are safeguards in place to ensure a seamless transition of nuclear control from one president to the next, regardless of circumstance, according to Stephen Schwartz, a nonresident senior fellow at the Bulletin of the Atomic Scientists.

Handing off the 'football'

Contrary to popular belief, the nuclear football does not contain a button or codes that can automatically launch a nuclear weapon but instead has the equipment and authorities that Trump would use to order a strike.

"There are at least three to four identical 'footballs': one follows the president, one follows the vice president, and one traditionally is set aside for the designated survivor at events like inaugurations and State of the Union addresses," according to Schwartz..

"On January 20, [the extra footballs] will be out of town somewhere with their designees, leaving just [Vice President Mike] Pence's briefcase unless the White House Military Office has prepared (or already has on hand) another backup for Biden," he told CNN.

Additionally, the President is required to carry a plastic card known as the "biscuit" with them at all times. The biscuit contains alphanumeric codes that are used to positively identify the president, who maintains the sole, legal authority to authorize a nuclear launch.

The reason is explicitly laid out in the Constitution, which gives Trump complete authority over the US nuclear arsenal up to the very second Biden is sworn in at noon on Wednesday.

"Under the 20th Amendment -- and absent any invocation of the 25th Amendment that would make Mike Pence the acting president -- Donald Trump is president through 11:59:59 am on January 20. Up to that point in time, he has the sole, legal authority to authorize the use of any or all of the US nuclear arsenal," Schwartz said.

"If an aide with the football accompanies Trump on Air Force One to Florida, that aide will remove himself or herself from Trump's presence at noon and return to Washington, DC, with the briefcase," he added.

After that point, Trump will no longer have such authority and the nuclear codes he carries will automatically be deactivated, he added. Meanwhile, Biden will automatically inherit the power to launch a nuclear strike at exactly the same time.

That means if Trump attempted to order a strike at 12:01 pm on Wednesday, the order would be considered illegal and military commanders tasked with carrying out the launch are obligated to refuse.

The transition of that authority is ensured by the fact that the codes Trump would use to authenticate his identity as President will become invalid at that time. Meanwhile, Biden will likely receive his "biscuit" on Wednesday morning when he, and likely Vice President-elect Kamala Harris, are briefed on the process of initiating a nuclear strike.

But their codes will not become active until noon on Wednesday.

Earlier this month, House Speaker Nancy Pelosi told House Democrats in a letter that she spoke with the Chairman of the Joint Chiefs of Staff Gen. Mark Milley to discuss Trump's access to the nuclear codes amid calls for the President to be removed from office after a violent pro-Trump mob stormed the US Capitol.

"This morning, I spoke to the Chairman of the Joint Chiefs of Staff Mark Milley to discuss available precautions for preventing an unstable president from initiating military hostilities or accessing the launch codes and ordering a nuclear strike," Pelosi wrote in a letter. "The situation of this unhinged President could not be more dangerous, and we must do everything that we can to protect the American people from his unbalanced assault on our country and our democracy."

After speaking with Milley, Pelosi told her caucus that she has gotten assurances there are safeguards in place in the event Trump wants to launch a nuclear weapon, according to multiple sources on a caucus call.

Senior military officials say while the President has sole authority to launch nuclear weapons he cannot do it alone.

If an adversary were to launch a missile at the US, the president would immediately be on a classified communication network, receiving minute-by-minute intelligence and recommendations on how to proceed.

There are safeguards against illegal attack orders whether its nuclear or conventional. To be legal, orders must have a legitimate target, a clear military objective and use proportional forces.

The general who recently commanded strategic weapons and is now number two at the Pentagon is adamant the military will not follow illegal orders from any president.

"If it's illegal, guess what's going to happen? I'm going to say, 'Mr. President, that's illegal.' And guess what he's going to do? He's going to say, 'What would be legal?' And we'll come up with options, with a mix of capabilities to respond to whatever the situation is, and that's the way it works. It's not that complicated," Gen. John Hyten, the former commander of US Strategic Command, said in 2017.

If a president persists in pushing illegal orders, a military commander would have no option but to resign.