How travel is being impacted by the Ukraine invasion 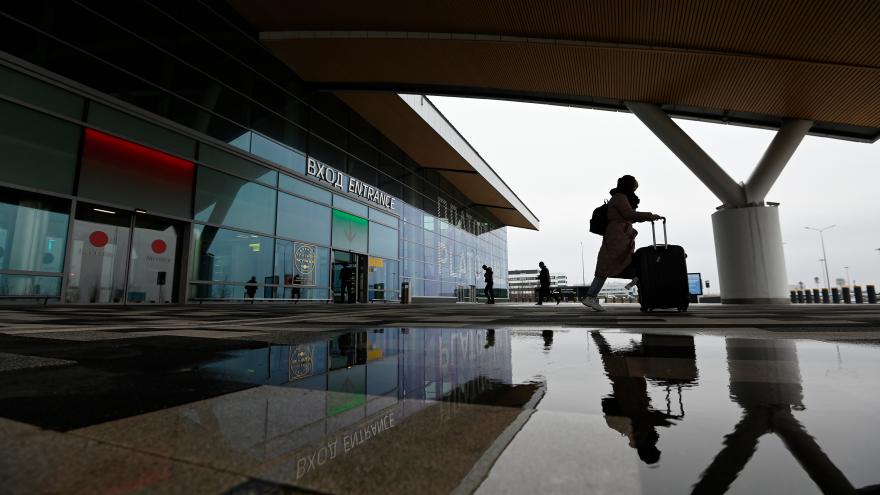 (CNN) -- Ukraine's airspace is currently closed in the wake of the Russian invasion.

Some commercial airlines, including Lufthansa and Air France, had already suspended flights to Ukraine earlier this week as tensions escalated.

Countries including the United States and the United Kingdom have advised their citizens to leave Ukraine.

The US government issued a travel advisory on February 12 warning against travel to Ukraine "due to the increased threats of Russian military action" as well as ongoing concerns about Covid-19.

The UK government also advises against all travel to Ukraine, explaining that "it is likely that commercial routes out of Ukraine will be severely disrupted and roads across Ukraine could be closed."

The European Union Aviation Safety Agency, known as EASA, has warned of a "high risk" to civilian aircraft flying near the Ukrainian border.

Here's what we know about how travel in Eastern Europe and Russia might be impacted in the wake of the conflict.

Can I still fly to Eastern Europe?

Air traffic is still moving outside of severely affected areas. As well as bordering Russia, Ukraine also neighbors Belarus, Poland, Slovakia, Hungary, Romania and Moldova, as the map above illustrates.

Moldova has closed its airspace, while Belarus has banned flights over part of the country.

There are no UK or US government warnings against traveling to Ukraine border countries -- or other Eastern European destinations -- because of the conflict.

All countries bordering Ukraine were already on the US Centers for Disease Control and Prevention's Level 4 list of highest-risk Covid-19 destinations for travel.

Florida-based travel adviser Gwen Kozlowski, a specialist in travel to central Europe and president of travel agency Exeter International, told CNN Travel on February 24 that her agency has had questions from travelers with upcoming trips to Poland, but no cancellations so far.

"We have guests traveling at the end of March and into April in Poland, but that's over a month out. It's impossible to say now how this will evolve. We're basically in wait-and-see mode," Kozlowski said via email.

My flight is supposed to be flying over Ukrainian airspace. Will it be rerouted?

If you are flying on a route that would usually cross currently blocked-off airspace, the airline will reroute the flight.

"For aviation, safety is always the top priority," said Willie Walsh, the director general of the International Air Transport Association airline industry body, in a statement provided to CNN Travel on February 24.

"IATA is helping to facilitate the relevant and timely sharing of information with airlines from government and non-government sources to support airlines as they plan their operations around airspace closures in Ukraine and parts of Russia."

Can I still travel to Russia?

Russian airspace on the border with Ukraine is closed to civilian flights. There are also some restrictions on domestic flights within Russia.

The US State Department issued a Level 4: Do Not Travel advisory for Russia in January citing "ongoing tension along the border with Ukraine, the potential for harassment against US citizens, the embassy's limited ability to assist US citizens in Russia," as well as Covid-19 and other factors.

The United Kingdom's advice to its citizens as of February 24 was more specific, advising against all but essential travel to certain Russian regions on the Ukraine border. The UK government also details information on increased restrictions and disruptions to domestic Russian flights, as well as warnings of escalated police presence and ID checks.

The UK has also banned civilian Russian aircraft from its airspace and above its territorial sea from February 24 until May 23. Russian airline Aeroflot currently operates direct flights between Moscow and London-Heathrow and Gatwick, according to its website.

Canadian citizens are advised to avoid travel to regions of Russia on the border with Ukraine.

"The bulk of our Russia travelers seem to be taking a wait-and-see approach right now, but, of course, this might change based on how events unfold," travel agent Kozlowski told CNN Travel via email.

How long will travel be affected?

The situation in Ukraine is fast-moving. It is unclear how long airspace over Ukraine, Moldova, Belarus or Russia will be impacted.

According to the UK government's travel advisory, restrictions on domestic flights in Russia are currently set to be in place through March 2.