How to watch the Senate impeachment trial 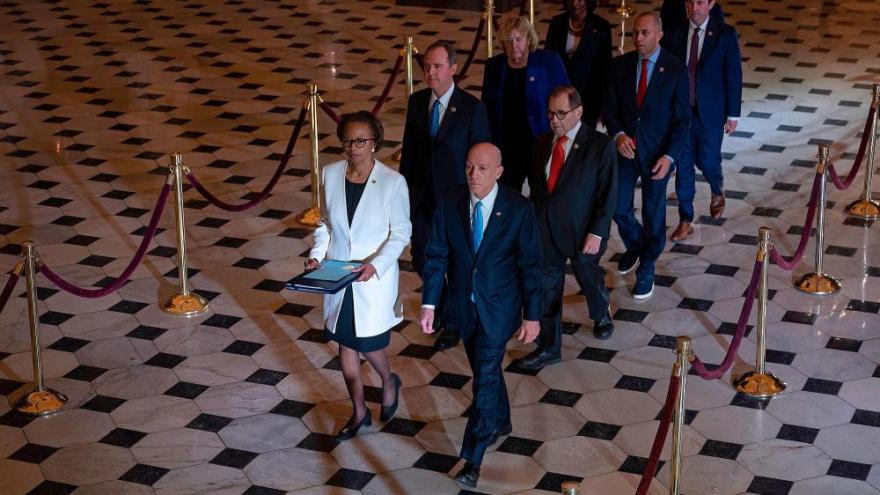 House Managers walk to the US Senate to deliver the Articles of Impeachment against US President Donald Trump on Capitol Hill on January 15, 2020, in Washington, DC.

(CNN) -- Tuesday marks the start of former President Donald Trump's second impeachment trial, with all eyes on the Senate serving as jury to deliberate whether to convict or acquit the former President.

The case arrives at the upper chamber, overseen by Senate president pro tempore Sen. Patrick Leahy, after the House voted last month to impeach Trump for a second time in a swift and bipartisan condemnation of his role inciting the January 6 riot at the US Capitol.

Senate leaders reached an agreement Monday giving the impeachment managers and Trump's lawyers up to 16 hours each to present their cases and creating the option for a debate and vote to call witnesses if the House impeachment managers seek it. But how long the trial will ultimately last and whether witnesses will actually be called remains to be seen.

Here's how to watch and what to know about the Senate impeachment trial:

How can people watch the trial?

CNN's special coverage of the trial will begin Tuesday at noon ET. Coverage will stream live and is accessible without a cable log-in on:

When will the trial get started?

Will we see witnesses?

At the request of the managers, there will be an option to hold a debate and vote on calling witnesses. But that's only keeping open the possibility -- it's not an indication on its own that the managers plan to do so.

Democrats' desire for witnesses who might be able to corroborate Trump's thinking and actions while the riots were unfolding is running into many Senate Democrats' wishes for a quick trial so they can move onto passing President Joe Biden's Covid-19 relief package. The problem for the managers is it's unclear whom they could call as a witness voluntarily who could speak to Trump's mindset. Even if the Senate voted to subpoena a witness who was in the White House on January 6, there could be a court fight over executive privilege that would delay the trial.

Last week, Trump's legal team swiftly rejected House impeachments managers' request for the former President to testify, putting the decision back on the Democrats over whether to try to compel Trump's testimony with a subpoena.

How will the trial operate logistically? Are there any changes due to Covid?

A Senate official familiar with the planning said there will be seats reserved for senators in the public gallery above the chamber and the Senate's "marble room" that's just off the floor, where the trial will be shown on television. Senators will have to be on the Senate floor to vote.

How long will the trial go?

The trial's final end date remains unclear. For each side's allotted 16 hours for presentations slated to begin Wednesday, presentations can not exceed eight hours per day or two days total.

Who will make the case to convict or acquit the President?

House Speaker Nancy Pelosi named nine members of her caucus to be impeachment managers to argue the Democrats' case in the Senate once the article of impeachment is sent to the chamber.

On the other side, Trump's office announced last week that David Schoen and Bruce L. Castor Jr. would head the legal team for his second impeachment trial, a day after CNN first reported that five members of his defense left and his team effectively collapsed. Schoen was on the team of lawyers representing Roger Stone in the appeal of his conviction related to issues the former Trump adviser took with the jury. Castor, meanwhile, is a well-known attorney in Pennsylvania who previously served as Montgomery County district attorney.

Outside of official arguments, a group of House Republicans allied with Trump are reprising their role at the former President's second impeachment trial to defend him in the public debate. Roughly a half-dozen House Republicans are aiding Trump's legal defense by planning to speak to reporters during breaks in the impeachment trial, according to a source familiar with the matter.

Will the Senate still conduct any legislative business?

The Senate vote Monday night confirming Denis McDonough as Biden's secretary of Veterans Affairs could be the last confirmation vote for a Cabinet official until after the impeachment trial ends.

That could change if there is an agreement by senators, although several Republicans have said they would not consent to voting on more nominees until after the trial.