How to watch the Republican National Convention 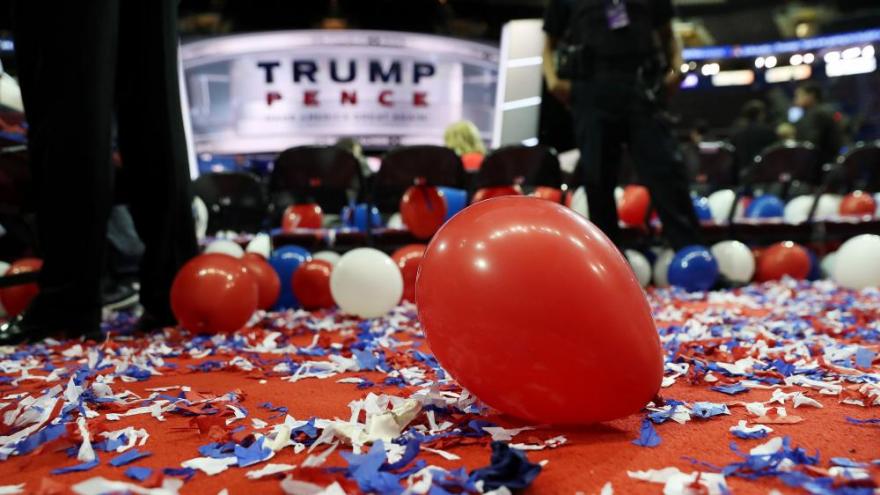 Balloons and confetti are seen at the end of the fourth day of the Republican National Convention on July 21, 2016 at the Quicken Loans Arena in Cleveland, Ohio.

(CNN) -- The Republican National Convention will get underway this week with a four-night event that will see the party formally renominate President Donald Trump while navigating a mix of online and in-person events due to the coronavirus pandemic.

Trump campaign senior adviser Jason Miller told NBC's "Meet the Press" Sunday that viewers can plan on hearing Trump "speaking at various parts through each of the nights" at the GOP convention.

The RNC will focus heavily on Trump's accomplishments over his first four years and lay out a second term vision for the administration, Miller said.

Here's everything you need to know about how to watch this year's Republican convention.

When is the convention?

The convention is scheduled to take place Monday through Thursday this week, and each night of programming will air from 8:30 p.m. to 11 p.m. ET.

How can I watch the convention on TV and online?

CNN will air special convention coverage from 8 p.m. to 2 a.m. ET for the duration of the Republican convention live on CNN, CNN en Español and CNN International.

CNN's Republican National Convention coverage will also stream live, with a log-in to a cable provider, on CNNgo (at CNN.com/go on your desktop, smartphone and iPad, and via CNNgo apps for Apple TV, Amazon Fire, Android TV, Chromecast, Roku and Samsung Smart TV).

Who is scheduled to speak each night?

Where will Trump accept the nomination?

Trump will accept the Republican nomination at the White House after scrapping his plans to deliver the speech in Charlotte, North Carolina.

Ethics experts have said that accepting the nomination from White House property highlights Trump's willingness to trample on norms. A federal law, known as the Hatch Act, generally forbids the use of government property and employees for political activities with some exceptions.

The President and vice president are exempted, but some previous officeholders have sought to limit political activity in the White House, for instance, by holding political events elsewhere or in the residential spaces of the presidential mansion.

Where will the rest of the convention take place?

After exhaustive deliberations over potential venues, the bulk of the convention will be centered in Washington, including on the White House lawn and at the Andrew W. Mellon Auditorium, situated around the block from Trump's hotel (which Republicans said they expected to act as a social hub for the week and will likely benefit financially).

Notably, Secretary of State Mike Pompeo plans to address the RNC on Tuesday from Jerusalem, a person familiar with his plans said, a break from longstanding traditions of leaving domestic politics when leaving the country -- particularly for the nation's top diplomat.

Will convention delegates be in Charlotte?

Yes, party delegates are still planning to convene in Charlotte to conduct the party's formal business and hold meetings -- and both Trump and Pence are expected to make an appearance on Monday, a Republican official familiar with the plans confirmed to CNN.

The pair is expected to attend the roll call votes by the slimmed-down group of 336 RNC delegates who will formally nominate them as the 2020 Republican presidential and vice presidential nominees.