How to watch Oprah's interview with Harry and Meghan 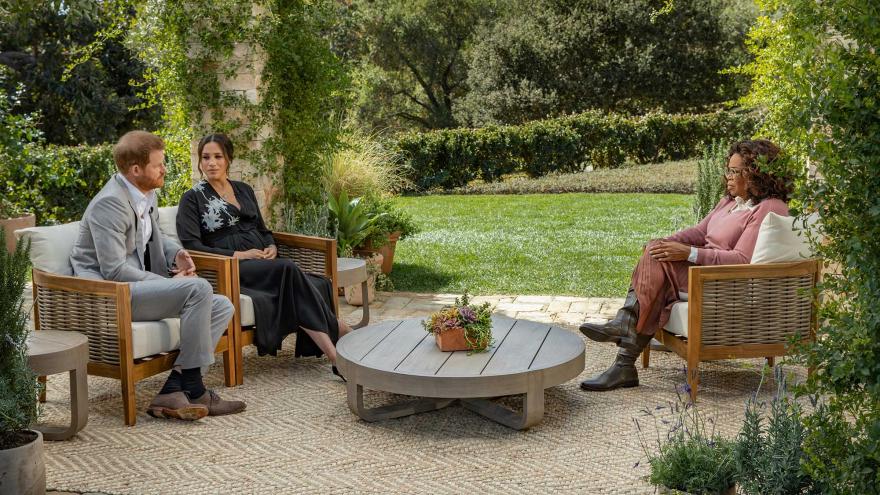 (CNN) -- Did you miss it? Oprah Winfrey's long-awaited interview with Prince Harry and Meghan aired Sunday night, but you can still watch the bombshell discussion online.

Here's what fans (and skeptics) of the Sussexes need to know:

When does the interview air?

"CBS Presents Oprah with Meghan and Harry" aired in the United States on Sunday, March 7, from 8 to 10 p.m. ET. In the United Kingdom, the interview will air on ITV on Monday, March 8, at 9 p.m. and will be available to stream simultaneously on the ITV Hub.

Oprah's interview with Harry and Meghan was pre-taped, and CBS teased preview clips over the past several days.

For those who didn't watch Sunday, the interview is streaming on CBS.com. And CNN has plenty of analysis.

Why is Oprah interviewing Harry and Meghan?

Oprah is friendly with the couple: She attended Harry and Meghan's wedding in May 2018, and Winfrey helped the couple get settled in the community. She previously partnered with Harry on a mental health documentary for Apple TV+.

Oprah has longstanding business ties with CBS, but she maintained control of the interview all along via her production company, Harpo. Her company crafted the interview plan and brought it to CBS.

Winfrey is one of the most renowned interviewers in the world. Sunday night's broadcast which could lift the lid on a litany of frustrations and grievances held by the couple against the royal institution they quit last year.

Harpo and CBS announced the US premiere, and then the global distribution arm of ViacomCBS Global lined up other international broadcasters from Australia to Switzerland.

Why is the interview taking place now?

The couple has mostly kept quiet about a sea of controversy surrounding their contentious relationship with the royal family, but they appear ready to speak out.

"(The Duchess) and the Duke are due to speak openly and honestly about their experience of recent years," Harry and Meghan's spokesperson said in a statement last week.

Still, the interview has been years in the making: Although the CBS interview was announced on February 15, in a preview clip released Friday, Oprah said she spoke to Meghan about a potential interview three years ago in February or March 2018 — even before the royal wedding.

"I couldn't have said yes to you then," Meghan said. "That wasn't my choice to make. So, as an adult who lived a really independent life — to then go into this construct that is... different than I think what people imagine it to be — it's really liberating to be able to have the right and the privilege in some ways to be able to say yes. I mean... I'm ready to talk."

Why is this interview important?

In January 2020, Harry and Meghan announced that they were stepping back from their roles as senior royals in a move that apparently surprised the royal family. And on February 19, 2021, just weeks before the Oprah interview was set to air, the Buckingham Palace announced that Harry and Meghan agreed with Queen Elizabeth II that they will not be returning as working members of the British royal family.

There has been tension between the couple and the palace for years now, and the duo is expected to unveil some revealing details about their experiences.

In a preview clip, Meghan said, "I don't know how they could expect that after all of this time, we would still just be silent if there is an active role that the firm is playing in perpetuating falsehoods about us."

What does this interview mean for CBS?

Oprah's interview with Harry and Meghan is a valuable piece of content, CNN's Chief Media Correspondent Brian Stelter wrote. It was created by Oprah's production company, Harpo Productions, and sold by ViacomCBS to television networks around the world.

None of the parties involved have commented on the financial stakes, but CBS is paying a license fee between $7 million and $9 million for the rights to air the interview, the Wall Street Journal reported. CBS and other broadcasters should be able to command premium pricing for ads during the special.