How to take advantage of rising interest rates 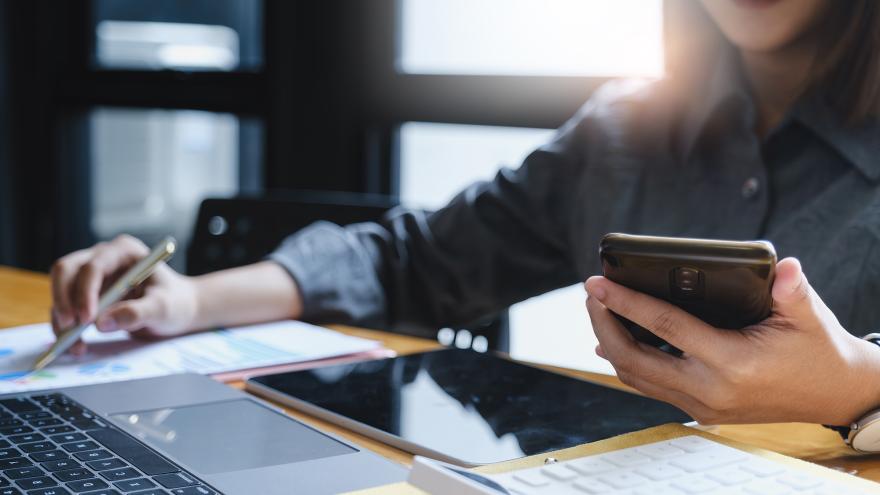 Editor's note: This is an updated version of a story that originally ran on May 5, 2022.

(CNN) -- With the Federal Reserve's interest rate hike on Wednesday -- its fourth since March -- consumers again face the question of where to park their savings for the best return and how to minimize their borrowing costs.

In its bid to beat back high inflation,the US central bank hiked its overnight lending rate another 75 basis points to a range of 2.25% to 2.50%. And more rate hikes are anticipated later this year.

"With inflation running north of 9%, we're not at the finish line and there will be more interest rate increases to come in the months ahead," said Greg McBride, chief financial analyst at Bankrate.com.

Here are a few ways to situate your money so that you can benefit from rising rates, andprotect yourself from their downside.

When the overnight bank lending rate -- also known as the fed funds rate -- goes up, various lending rates that banks offer their customers tend to follow. So you can expect to see a hike in your credit card rates within a few statements.

Before theFed'srate hike Wednesday, the average credit card rate was 17.25%, up from 16.3% at the start of the year, according to Bankrate.com.

Best advice:If you're carrying balances on your credit cards -- which typically have high variable interest rates -- consider transferring them to a zero-rate balance transfer card that locks in a zero rate for between 12 and 21 months.

"That insulates you from [future] rate hikes, and it gives you a clear runway to pay off your debt once and for all," McBride said."Less debt and more savings will enable you to better weather rising interest rates, and is especially valuable if the economy sours."

Just be sure to find out what, if any, fees you will have to pay (e.g., a balance transfer fee or annual fee), and what the penalties will be if you make a late payment or miss a payment during the zero-rate period. The best strategy is always to pay off as much of your existing balance as possible -- and to do so on time every month -- before the zero-rate period ends. Otherwise, any remaining balance will be subject to a new interest rate that could be higher than you had before if rates continue to rise.

If you don't transfer to a zero-rate balance card, another option might be to get a relatively low fixed-rate personal loan.

Mortgage rates have been rising over the past year, jumping more than two percentage points since January.

The average 30-year fixed rate mortgage, for instance, recentlyjumped to 5.54% from 3.22% at the start of the year, according to Freddie Mac.

And mortgage rates mayclimb even further this year.

So if you're close to buying a home or refinancing one, lock in the lowest fixed rate available to you as soon as possible.

That said, "don't jump into a large purchase that isn't right for you just because interest rates might goup.Rushing into the purchase of a big-ticket item like a house or car that doesn't fit in your budget is a recipe for trouble, regardless of what interest rates do in the future," said Texas-based certified financial planner Lacy Rogers.

If you're already a homeowner with a variable-rate home equity line of credit, and you used part of it to do a home improvement project, McBride recommends asking your lender if it's possible to fix the rate on your outstanding balance, effectively creating a fixed-rate home equity loan. Say you have a $50,000 line of credit but only used $20,000 for a renovation. You would ask to have a fixed rate applied to the $20,000.

If that's not possible, consider paying off that balance by taking out a HELOC with another lender at a lower promotional rate, McBride suggested.

If you've been stashing cash at big banks that have been paying next to nothing in interest for savings accounts and certificates of deposit, don't expect that to change just because the Fed is raising rates, McBride said.

That's because the big banks are swimming in deposits and don't need to worry about attracting new customers.

But online banks and credit unions are looking to attract more deposits to feed their thriving lending businesses, McBride said. Consequently, they're offering far higher rates and have been increasing them as benchmark rates go higher.

So shop around. Today some online accounts are paying up to 2%. If you want to make a switch, however, be sure to only choose those online banks and credit unions that are federally insured.

Given today's high rates of inflation, Series I savings bonds may be attractive because they're designed to preserve the buying power of your money. They're currently paying 9.62%. But that rate will only be in effect for six months and only if you buy an I-Bond by the end of October, after which the rate is scheduled to adjust. If inflation falls, the rate on the I-Bond will fall, too.

There are some limitations. You can only invest $10,000 a year. You can't redeem it in the first year. And if you cash out between years two and five, you will forfeit the previous three months of interest.

"In other words, I-Bonds are not a replacement for your savings account," McBride said.

Nevertheless, they preserve the buying power of your $10,000 if you don't need to touch it for at least five years, and that's not nothing. They also may be of particular benefit to people planning to retire in the next 5 to 10 years since they will serve as a safe annual investment they can tap if needed in their first few years of retirement.

The confusing mix of factors at play in the markets today makes it tough to say which sector, asset class or company is certain to do well in a rising rate environment, Ma noted.

"It's not just rising rates and inflation, there are geopolitical concerns going on... And we have a slowdown that may lead to a recession or maybe it won't... It's an uncommon, even rare, mix of multiple factors," he said.

So, for example, financial service companies typically do well in a rising rate environment because, among other things, they can make more money on loans. But if there's a slowdown, a bank's overall loan volume could go down.

That's why Ma suggests making sure your overall portfolio is broadly diversified across equities, with some exposure to commodities, real estate and maybe even a small amount in precious metals.

"Look at being diversified across areas that historically have done well in rising-rate and inflationary environments," he said.

The idea is to hedge your bets, since some of those areas will come out ahead, but not all of them will.

That said, if you're planning to investin a specific stock, consider the company's pricing power and how consistent the demand is likely to be for their product. For example, technology companies typically don't benefit from rising rates. But since cloud and software service providers issue subscription pricing to clients, those may rise with inflation, said certified financial planner Doug Flynn, co-founder of Flynn Zito Capital Management.

To the extent you already own bonds, the prices on your bonds will fall in a rising rate environment. But if you're in the market to buy bonds youcan benefit from that trend, especially if you purchase short-term bonds, meaning one to three years, since prices have fallen more than usual relative to long-term bonds.Normally,they move lower in tandem.

Muni prices have dropped significantly, yields have risen, and many states are in better financial shape than they were pre-pandemic, he noted.

Other assets that may do well are so-called floating rate instruments from companies that need to raise cash, Flynn said. The floating rate is tied to a short-term benchmark rate, such as the fed funds rate, so it will go up whenever the Fed hikes rates.

But if you're not a bond expert, you'd be better off investing in a fund that specializes in making the most of a rising rate environment through floating rate instruments and other bond income strategies. Flynn recommends looking for a strategic income or flexible income mutual fund or ETF, which will hold an array of different types of bonds.

"I don't see a lot of these choices in 401(k)s," he said. But you can always ask your 401(k) provider to include the option in your employer's plan.