How to quit smoking: 5 actions you can take now 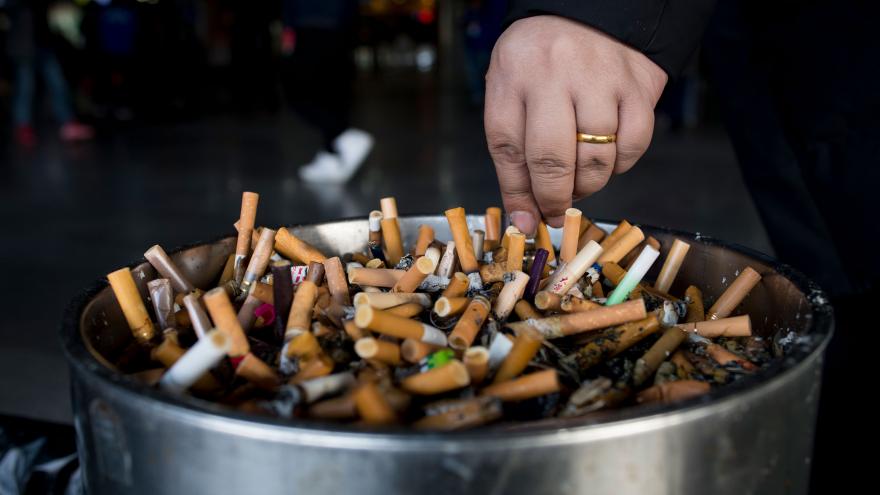 (CNN) -- Cigarette smoking is very addictive and can have long-term, adverse health effects. But there is hope for those who want to quit thanks to innovative apps, help lines and proven coping strategies.

In 2019, more than 34 million Americans smoked, according to the US Centers for Disease Control and Prevention. That was almost 14% of Americans 18 and older.

Cigarettes have chemicals that can make this addiction particularly insidious.

Despite the steep uphill battle, the addiction can be overcome. Here are five actions you can take to help you or a loved one quit smoking and enjoy a healthier life:

The goal should not be to quit smoking; rather, it should be on how to "stay quit," said Dr. Panagis Galiatsatos, director of the Tobacco Treatment Clinic at Johns Hopkins Medicine in Baltimore, Maryland.

He said he's had patients who say they've quit many times, but that they've not been able to permanently stop.

He recommends people break up their larger goal of quitting into smaller goals.

For example, learn your different triggers that could make you want to smoke. That way, you can be mindful and find solutions for those actions.

2. Make each time you quit a learning experience

Most people who smoke quit eight to 12 times, because of the addictiveness of cigarettes, before they successfully quit for good, said Jonathan Bricker, professor in the public health sciences division at the Fred Hutchinson Cancer Research Center at the University of Washington in Seattle.

Because relapse is so common, Bricker tells his patients to find a lesson they can take from each experience.

Patients should approach quitting from the viewpoint that the more things they learn from their relapses, the greater their chance is of quitting permanently, he said.

3. Use phone lines and apps for support

Support groups for people who want to quit smoking are dwindling, so Bricker recommended calling a quitting help line to get outside assistance.

The CDC funds a tobacco cessation hotline, 1-800-QUIT-NOW (784-8669), which is free to US residents in all states, plus the District of Columbia, Guam and Puerto Rico. Your call goes automatically the quit line in your state or territory.

Callers are connected to coaches who help smokers create a plan to quit and give them advice when facing withdrawals and cravings.

Currently, state cessation hotlines only reach about 1% of people who smoke, which the CDC largely attributes to the lack of funding to promote the service.

Bricker's team at Fred Hutch helped to create the app iCanQuit, which was supported by a grant from the US National Institutes of Health.

The app focuses on acceptance and commitment therapy, which encourages people to accept their emotions and thoughts instead of pushing them away. The tool also offers resources for quitting and handling cravings when they arise, Bricker said.

4. Speak to your medical provider

People who want to quit smoking can talk to their medical provider to come up with a treatment plan filled with multiple strategies, Galiatsatos said.

Doctors can prescribe medication to curb cigarette cravings and make them more manageable, he said. It's a short-term solution to help train your brain to not crave cigarettes as strongly, Bricker added.

The medications doctors provide will depend on your specific situation, Bricker said. The prescriptions tend to be minimal at first then escalate depending on the severity of the addiction.

Galiatsatos said he's never come across a patient who doesn't already know that smoking is bad, so he recommends avoiding that argument when appealing to a love one who smokes.

"If you are really serious about helping your loved one quit, you have to approach it as pro-smoker and anti-smoking," he said.

When trying to help someone who smokes, make it clear that you are approaching the situation with no stigma or judgment, Galiatsatos said.

Once trust is established, he recommends friends and family members offer to help smokers find resources on how to quit smoking.

Medical providers should also be supportive of their patients who smoke, Galiatsatos said.

If patients feel judged by their doctors for smoking, they might just lie about it. And that doesn't help anyone, he said.

Even when patients don't feel motivated to quit smoking that day, it's important to outline the different treatment options so they have the resources later .

Why is smoking so addictive anyway?

Cigarettes are filled with chemicals such as nicotine, which are chemically enhanced to drive that addiction, said Galiatsatos.

RELATED: Smokers may be at greater risk of depression, study finds

When the nicotine fits into the acetylcholine receptors, your body releases dopamine, the "feel-good" brain chemical. When the dopamine goes away, people begin craving another cigarette.

"I always tell people this is the most insidious addictive molecule known to man because it doesn't just overdose you," said Galiatsatos, who is also a volunteer medical spokesperson for the American Lung Association.

It rewires the smoker's brain over years and years, and "by the time someone realizes it's robbing them of their health, it's incredibly hard to break that addiction."

Despite the daunting effort it takes, never forget -- it is possible to overcome this addiction and enjoy better health.