Asian Americans are (still) under attack. Here are easy ways you can help 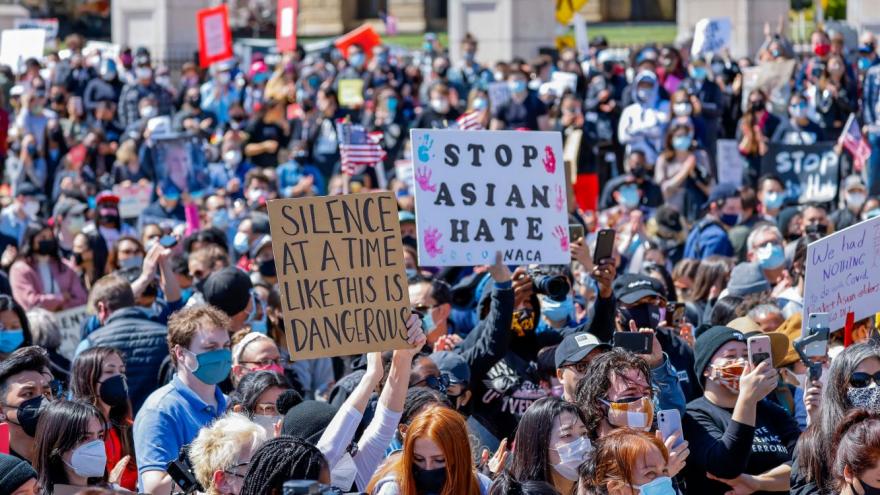 Across the US, Asian Americans are under attack -- verbally, economically and physically.

(CNN) -- Across the US, Asian Americans are under attack -- verbally, economically and physically.

An elderly man on his daily walk was ambushed, shoved to the ground and killed. An Asian woman was kicked in the face repeatedly as bystanders watched and didn't intervene. A business owner's restaurant was spray-painted with "Kung flu," "go back 2 China" and "hope U die."

Anti-Asian hate crimes have more than doubled during the pandemic, according to the Center for the Study of Hate and Extremism at California State University, San Bernardino.

But there are easy ways people of all backgrounds can help stop the vitriol and violence:

Stop racist remarks when you see or hear them

If you see a friend joke about the "China virus" or "kung flu" on social media, reach out and explain why that's neither funny nor harmless.

Words have consequences. Many Asian Americans have been spat on, attacked or erroneously blamed for the "China virus," "Chinese virus" or the "kung flu."

Even Asian Americans who have never been to China have been accused and assaulted. And hate crimes against Asian Americans have increased by nearly 150% during the pandemic.

Bystander intervention courses arm you with the training needed to stop harassment and possibly prevent violence.

"We'll start by talking about the types of disrespect that Asian and Asian American folks are facing right now -- from microaggressions to violence," the registration website says.

"We'll talk through five strategies for intervention: distract, delegate, document, delay, and direct; and how to prioritize your own safety while intervening ... and you'll leave feeling more confident intervening the next time you see Anti-Asian/American harassment online or in person."

According to the Pew Research Center, 44% of Americans surveyed said they or someone in their household suffered either a job loss or pay cut since February 2020. But among Asian Americans, that number rose to 54%.

The financial blow can be doubly devastating for immigrant families who don't have strong financial safety nets or don't yet have the language skills to compete for other jobs.

In California, for example, 83% of the Asian American labor force with a high school education or less filed for unemployment claims in the first few months of the pandemic -- "compared to 37% of the rest of the California labor force with the same level of education."

Add a frame to your profile photo

We've seen how quickly racist vitriol can spread across social media. One way to counter that is to spread support instead of hate.

Facebook offers many frames to fit around your profile photo, including "Stand against racism," "Stop Asian hate" and "Stop AAPI hate."

Such messages can offer much-needed solidarity with Asian Americans and Pacific Islanders, many of whom feel like they have targets on their backs.

They can also help reduce the popularity of anti-Asian sentiment.

The recent Atlanta-area spa shootings killed eight people, including six women of Asian descent. For some of the families, grief is now compounded by financial uncertainty.

One victim was a single mother and sole caretaker for two sons who have no other family in the US.

"They were worried about rents and utility fees and other practical costs, including the funeral process," he said.

GoFundMe has verified eight accounts that will directly benefit some of the families of those killed or injured in the March 16 attacks:

-- Soon Chung Park: Park's widower said he is too overcome with grief to work. "I am raising money to pay for my living expenses, including rent and bills, because I am currently unable to work due to the trauma I have experienced from this attack and from the death of my wife," Gwangho Lee wrote. "I would be very grateful for any support that will allow me to get back on my feet after this terrible loss."

-- Suncha Kim: "Like many asian immigrants, she spoke very little English and worked two to three jobs. This took immense courage and my grandmother was a fighter," her family said in a written statement. "As an immigrant, all my grandmother ever wanted in life was to grow old with my grandfather, and watch her children and grandchildren live the life she never got to live."

-- Xiaojie Tan: Tan and her daughter Ying "Jami" immigrated to the US by themselves. "Xiaojie loved her life in the US, and worked really hard to provide for her family -- she was financially supporting her sister and mother in China," said the GoFundMe page benefiting her daughter. Now, "in the wake of this tragedy, Jami is separated from her Chinese relatives, by distance and by the pandemic."

-- Yong Ae Yue: "Mom was an amazing woman who loved to introduce our family and friends to her home-cooked Korean food and Korean karaoke," her youngest son wrote. "The world will throw you trials and tribulations to test you, but this test feels so unfair. We are still in shock over the violent murder of our mother."

-- Hyun Jung Grant: "She was a single mother who dedicated her whole life to providing for my brother and I," her son wrote. "It is only my brother and I in the United States. The rest of my family is in South Korea and are unable to come."

-- Paul Michels: He's survived by a wife of 30 years, her restaurant manager said. The manager started an account for the family, saying, "if anyone is willing to help, it would be greatly appreciated, anything will help, keep in mind this could have been you or one of your family members, so please help."

-- Delaina Ashley Yaun: She was the mother of two children, including an 8-month-old girl. Yaun and her husband were both getting a massage when gunfire erupted. "She was a good person," her sister said. "She didn't deserve that. Nobody deserved it."

-- Elcias Hernandez-Ortiz: "He was shot in the forehead down to his lungs and into his stomach. He will be needing facial surgery," his wife wrote. "Please help me and my family raise money to cover for my husband's medical bills. Please pray for my family and the family's that were affected by this shooting."

GoFundMe said no verified account has been set up yet for the family of the remaining victim, Daoyou Feng, who was killed in the attacks.

Support groups that are fighting for change

Over the past year, more than 3,700 cases of discrimination, harassment or violence against Asian Americans have been reported, according to the advocacy group Stop AAPI Hate.

The Asian American Legal Defense and Education Fund works to protect and promote the civil rights of Asian Americans. It's fueled by donations and volunteer lawyers and law students.