How this 'little trail that could' aims to change Salt Lake recreation, transit 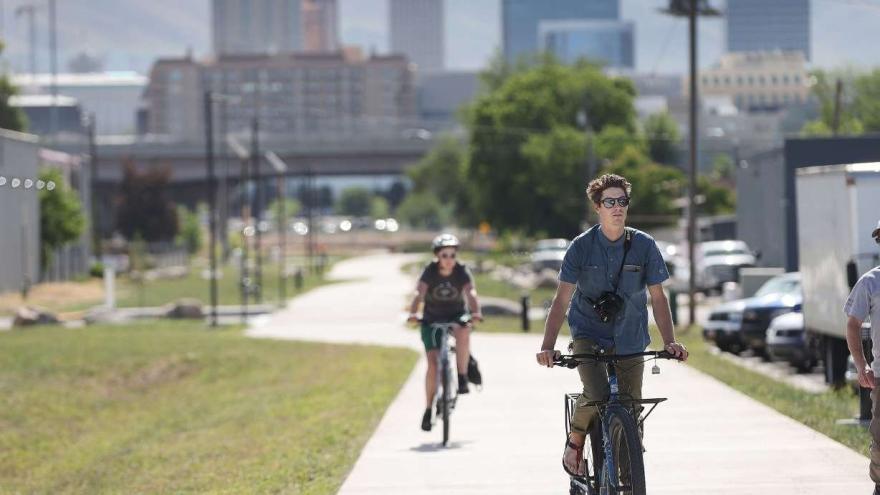 SALT LAKE CITY (KSL) -- City leaders saw potential in a small 1.5-mile section of Union Pacific's railroad line when the company abandoned it amid a route realignment in the northern end of Salt Lake City's Poplar Grove neighborhood in 2008.

They viewed the suddenly available line as the perfect short trail that could connect Salt Lake City's west side with downtown and the transit hub areas. The line also opened up a new option to help improve stormwater infrastructure and add green space along the route.

However, turning the railway into the Folsom Trail didn't happen overnight. It took over a decade of studying, designing and fundraising until it finally came to fruition Tuesday, as Salt Lake City Mayor Erin Mendenhall, Utah Transit Authority officials and local business owners gathered at the trail's western terminus to officially open the new trail's first mile.

"This is the little trail that could," Mendenhall said. "Not only because it pays homage to this trail's former life as a rail corridor, but because this project has been steadily chugging along for an entire decade — and we're not done."

The new Folsom Trail may not look mighty in size but it's an important piece in transportation, said Carlton Christensen, Utah Transit Authority's board of trustees chairman. The 10-foot wide paved pathway connects UTA's North Temple FrontRunner and TRAX stations to 1000 West at Folsom Avenue (40 South), which is about a block or two east of the popular Jordan River Parkway Trail.

Its importance is due to the many transportation hurdles that divide Salt Lake City's west side from the rest of the city, especially in the Poplar Grove neighborhood.

The area has essentially been blocked in for decades as a result of railroads, freeways and industrial businesses. It's made it difficult for residents to walk or bike safely around because of these issues. This also made it difficult for people who wanted to safely travel west on their way to the Jordan River Parkway.

"Due to a lot of the industrial and railroad uses in the area, there just wasn't a great connection," Christensen explained.

City leaders and Utah transit officials believe the trail helps erase that divide, allowing residents and recreation enthusiasts to safely commute via bicycle or any form of nonmotorized transportation without having to share the road — something that deters some people from riding in the area. It matches other east-west trails in the city, such as the larger 9 Line and Parley's trails.

While the Folsom Trail is finally open, the project is far from over. Future plans call for a trail extension to complete the stretch of abandoned track between 1000 West and the Jordan River Parkway by the Fisher Carriage House, which is being turned into a city-sponsored river recreation center and engagement hub.

A portion of Mendenhall's proposed $80 million parks bond dedicated to the trail would go toward acquiring the right of way through private land between the paths and completing the trail, city officials told KSL.com.

City planners, in coordination with the nonprofit Seven Canyons Trust, are also in the middle of designing sections of City Creek that will be daylighted along the trail. The creek runs underneath the ground parallel to the trail in the area but it has been buried underground for decades as a result of the area's past industrial use and previous city policies.

Mendenhall said the daylighting project will help turn the Folsom Trail into much-needed green space to spruce up the historically industrial section of the city as Salt Lake City's downtown population is projected to double in the next few years.

"We're adding incredible density," the mayor said. "Our access to open space and recreation and having the ability to just get outside and have a good time is limited, given our built-out space. So building trails and corridors like this are a critical part of the quality of life for Salt Lakers."

There isn't a timeline yet for when crews plan to start daylighting the creek.

Meanwhile, all the change is good news for residents and small business owners, said Rico Brands founder Jorge Fierro. He was recently forced to relocate his business, but it serendipitously led him to a spot also adjacent to the Folsom Trail.

Fierro views the trail as a way for his employees to commute in a different way if they want, as well as something that bolsters the city's west side.

"The west side needs a little (tender loving care) and I feel that the city is truly, honestly doing as much as they can to be able to do it in such a great way," he said, prior to cutting the ribbon to signal the trail's opening. "I know, for a fact, that this is going to be incredible for the economy on the west side."