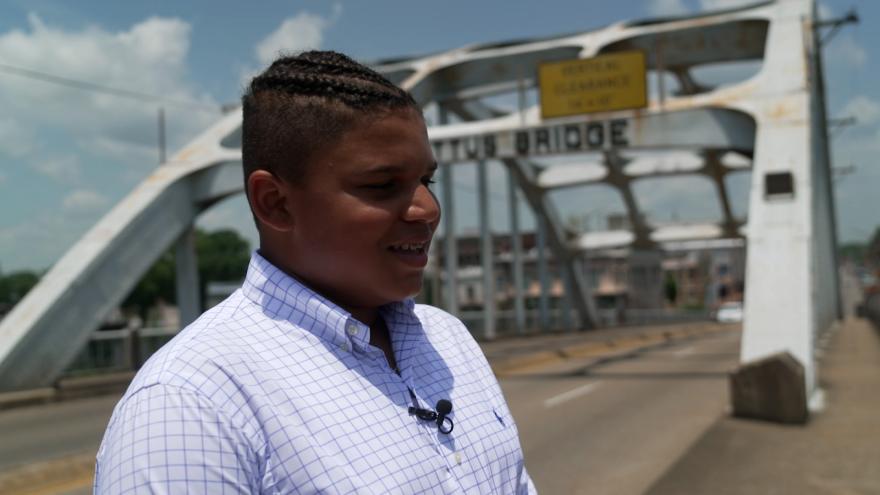 (CNN) -- Walking across the Edmund Pettus Bridge is a powerful experience for pretty much anyone who knows the history of Bloody Sunday, a 1965 march for voting rights in Selma, Alabama, that was stopped by violent, racist state troopers.

The power of Selma is next-level for young Tybre Faw.

It's where he met his hero, John Lewis, four years ago when he was just 10 years old. Lewis led the march in 1965 and nearly died after state troopers hit his skull with a billy club.

"It feels emotional," Tybre said while walking across the storied bridge last month. "Every time I come to Selma or get near this bridge, I can still feel his presence."

Tybre's interest in the civil rights movement began after his elementary school performed a play on Martin Luther King Jr. and his teacher talked about a relative who had known King. After checking out books to read more about King and other leaders of that era, he learned about Lewis. When Tybre realized Lewis was then a congressman from Georgia, he became determined to meet him. In 2018, when Tybre heard that Lewis would be in Selma for the anniversary of Blood Sunday, he asked his grandmothers to make the seven-hour drive with him from his home in Tennessee.

"I wanted to meet him and just say thanks to him for fighting for my rights, and many other people's rights," Tybre said of that first trip to Selma. The then-10-year-old wasn't sure if he was even going to see Lewis that day. "I got way more than what I wanted."

We, too, were in Selma in March 2018, following Lewis on his annual civil rights pilgrimage to commemorate the anniversary of the march.

We spotted Tybre standing in the parking lot outside the church where Lewis was attending a service. He was standing quietly, holding a handmade sign:

"Thank you, Rep. John Lewis. You have shown me how to have courage, raw courage. Selma was the turning point."

It was striking how still this young boy was, standing for so long, waiting for hours.

"I was serious then," he recalled, "It's your hero. You've got to make a good impression."

We brought him over to the door where Lewis was meant to exit, and when the congressman emerged, he noticed the boy immediately, read his sign and gave him a hug.

As Lewis and a large group of lawmakers, including future Vice President Kamala Harris, prepared to march across the bridge, Lewis beckoned the young boy over to walk alongside him.

"I was so little, so the moment was really big," Tybre remembered. "I [kept] thinking about what he did on this bridge and how he fought for my rights, and many more. It was just very overwhelming."

Their friendship lasted beyond that day in Selma. They stayed in contact and spent more time together.

"I got to see him just as a friend, and the relationship started to grow," said Tybre. They had fun.

He once joined the Georgia Democrat on the floor of the US House of Representatives and went to a football game at Benedict College with him. They talked often, and Tybre recalls FaceTiming the congressman on his birthday. As a gift, he sent him a library card.

"One of the things that started John Lewis to civil rights is he can't go to the library and get a book because he was Black. He couldn't get a library card. So we thought that would be a good gift for him," Tybre explained.

Their special bond endured beyond Lewis' death in 2020.

Lewis' family invited Tybre to read the poem "Invictus" at the congressman's funeral. It was Lewis' favorite.

Among the slew of notable speakers, including three former Presidents, was a 12-year-old boy. It spoke volumes about their relationship and how important it was to Lewis to pass his hard-fought experiences and determination on to younger generations.

"I got through it, and then I couldn't hold it in anymore, and the tears let out, but I was very proud of myself at that moment," Tybre said of the funeral. "I felt strong, and like he was right beside me when I did it."

Following in his footsteps

As a teenager, Lewis had reached out to his own civil rights icon -- Martin Luther King Jr.

King took a special interest in the young activist, just as Lewis did with Tybre more than 50 years later.

"I think he [saw] that, and maybe that's one of the reasons why he took me under his wing," Tybre said.

Their unforgettable story is depicted in a new children's book from Scholastic -- "Because of You, John Lewis: The True Story of a Remarkable Friendship." It captures Lewis' impact on this one young man, whose life has been forever changed.

And how to get into what Lewis famously called "good trouble."

Tybre says that when he sees a bully on the playground, he thinks of Lewis' famous phrase.

It's been two years since the congressman died, and though the two had only a short time together, Lewis' legacy lives on in Tybre.

"I never thought I would be so involved in marches, and I just got to see the world bigger. And my little corner wasn't enough. He changed my entire life," Tybre said.

At 14 years old, he's already decided he wants to run for office one day.

"I hope I can get into government and have a national voice so I can tell more people to get in good trouble and to be more involved," Tybre said. "I do want to be in John Lewis' place. I want to get in his office. If that can be possible, that would be amazing."

Tybre is also a football player -- he's a lineman on both sides of the ball -- and said most of his friends are more focused on sports and activities other than history and civil rights. But he is trying to change that.

"My goal is to get every kid to know John Lewis, about his legacy and what he stands for," he said. "Get in good trouble and follow in his footsteps. That's my goal."