How the world's largest inflatable aircraft hangar was built 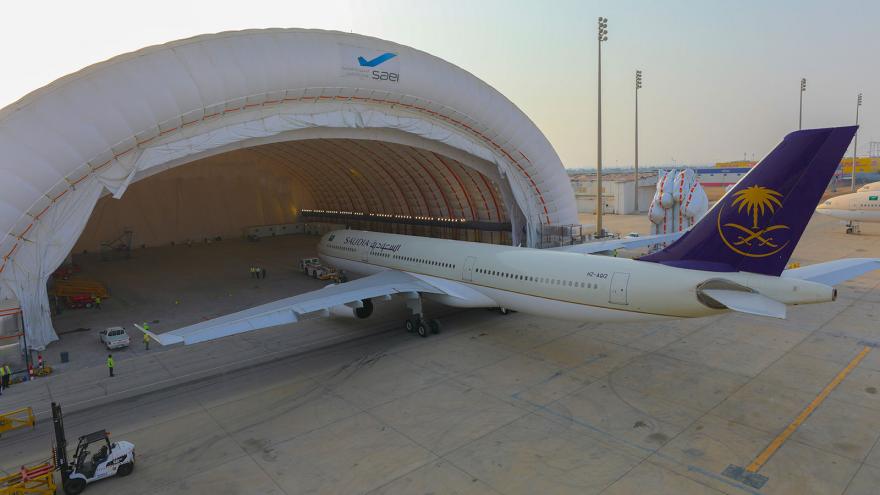 Just ask the planners of Berlin's new Brandenburg Airport, which has only just entered service after a decades-long building process plagued by engineering mishaps.

Even when everything goes smoothly, relatively simple facilities, such as hangars, can take years to build and make ready for operations.

Luckily for those airports that find themselves facing the need to increase capacity at short notice, constructive solutions are no longer limited to just traditional bricks-and-mortar.

The lightness of air can be tamed not only to enable powered flight but also to give shape to all sorts of structures. The flexibility and malleability afforded by inflatable objects has long been appreciated by engineers, who have found a variety of aerospace applications for them, from airships to the decoys used to simulate air bases at the height of World War II. 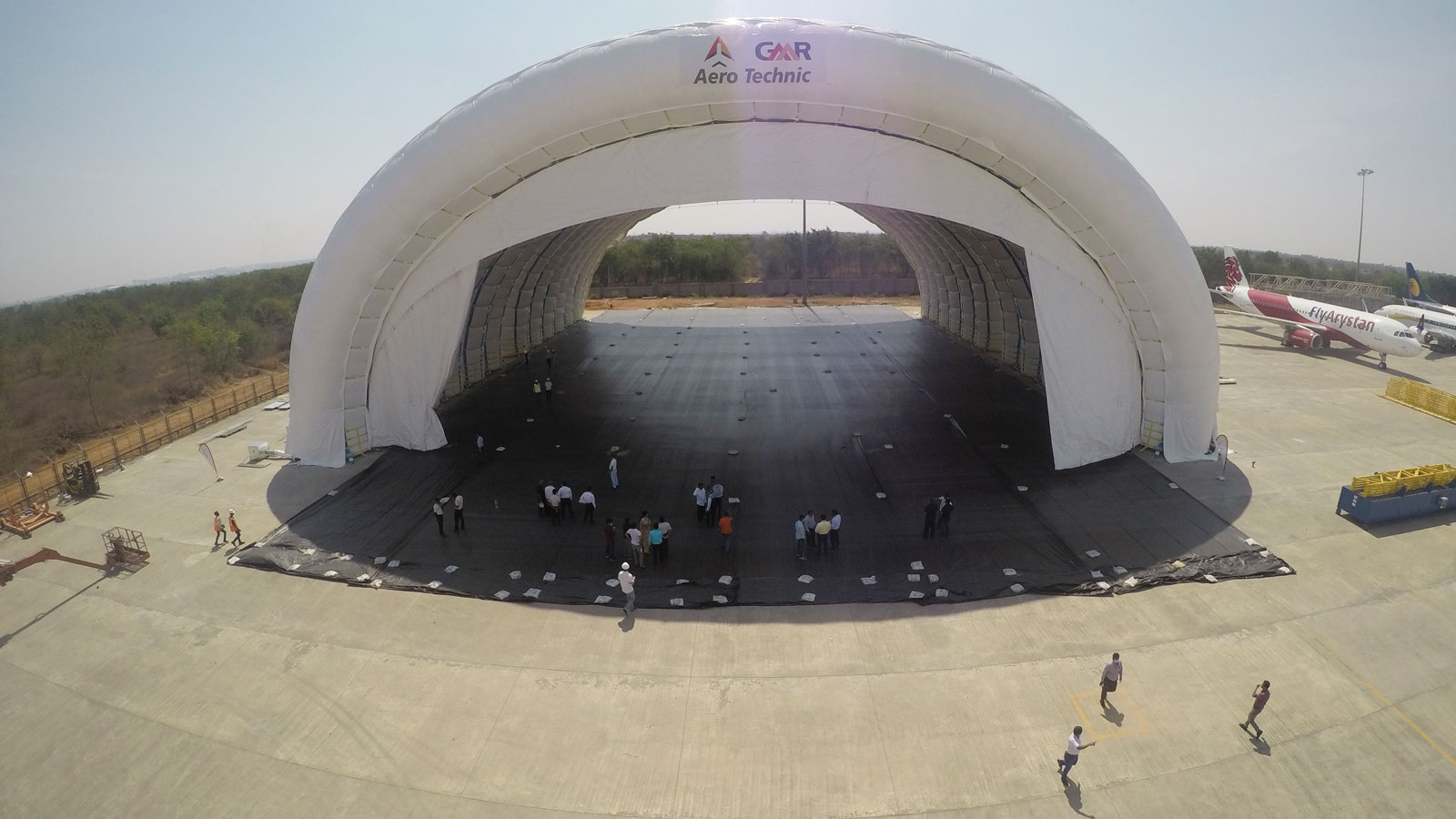 To answer this question, we just need to travel to the Arabian Peninsula.

It is here in Saudi Arabia, opposite the main terminal of Jeddah's King Abdulaziz International Airport, that a large white, ribbed structure rises from the ground up to a height that makes even the jumbo jets parked nearby appear small.

This is the largest inflatable hangar in the world, constructed in 2019 by Buildair, a Barcelona-based firm that has built similar facilities of different sizes at several other airports in Europe, Asia and the Middle East.

Buildair is one of a small group of firms, including Ireland's J.B. Roche from Ireland, the UAE's Aviatech and Russia's Aviastroy, which are able to deploy inflatable structures upon demand. Of these, Buildair has found a particular niche in the market for very large inflatable structures.

A case in point is the hangar in Jeddah, which is used by a Saudi aerospace services firm to provide maintenance to commercial aircraft.

With its 81 meters of clear length (that's usable space excluding the walls), 75 meters of width and 25.5 meters of height, this facility is capable of sheltering airliners up to the size of a Boeing 787 or an Airbus A330.

That record could also be surpassed soon, since the firm has designed an even larger inflatable hanger capable of housing the largest passenger jet of all. "We are talking with a major A380 operator that is interested in this technology," Jordi Pirretas, Buildair's founder and managing director, tells CNN Travel.

The hangar's ribbed appearance, reminiscent of Michelin's famous "Bibendum" tire guy mascot, is due to the structure being made of inflatable fiber tubes covered in a PVC layer.

Air is blown from both ends of the tubes in order to inflate them and keep air pressure at the desired level on a continuous basis (pressure inside the tubes is continuously monitored by an automatic control system).

If you've ever used an inflatable mattress, you may have noticed that air pressure usually drops a little over time due to air slowly trickling out. And then there's the fact that air volume also changes with temperature.

To prevent this, Buildair has developed a proprietary technology, called AIRTIGHT, to seal the structure and hold it in place without having to continuously pump air into the tubes. Pressure inside the tubes is also monitored at all times by an automatic control system.

A beneficial property of these inflatable hangars is that, unlike bricks and mortar, they let radio frequencies through. This allows them to be considered as if they were "transparent," which means there aren't as many constraints when it comes to their location within an airfield's grounds.

The air in the tubes, however, acts as an insulator, creating an air chamber between the outer and inner walls that can be several meters wide (the Jeddah hangar, for example, has a 7.5-meter air chamber) so people can work inside the hangar at all times and in all climates. The interior is fitted with lighting, climate control and fire protection systems, just as in a conventional facility.

Inflatable structures aren't permanent, so, unlike a traditional hangar, they will need to be replaced at some point. Yet surprisingly for an ephemeral construction, if well maintained, inflatable hangars can remain in place for years.

"What happens often is that, even if they were built for a short period of time, once in place, operators see no reason to dismantle them," says Roberto Maurice Flores of Abu Dhabi's Khalifa University, who collaborated with Buildair in his previous role at CIMNE, a research institute at the Polytechnic University of Catalonia.

Even if the outer walls show signs of wear due to constant exposure to the weather and sunlight, they can be replaced piecemeal while the whole is kept in place," he adds.

The key advantage of the hangars is that it can take less than three months from initial planning stages to the moment the hangar becomes operational. The assembly itself can be completed in a matter of hours.

Another bonus is that no ground has to be broken to install them. The structure can be anchored by attaching it to movable blocks of concrete or by nailing it to soft ground. In either case, it can be dismantled without leaving any permanent traces.

The flexibility and rapid deployment offered by these inflatable structures has uses in areas of civilian engineering beyond aeronautics: for example, by providing stopgap solutions when natural or man-made disasters damage key infrastructure.

Buildair, for example, has invested in a sister company called PS Technologies to develop and build inflatable bridges that can be deployed in response to emergency situations.

These bridges, which are capable of withstanding weights of between 16 and 30 tons, can be installed in as little as five hours wherever floods have destroyed permanent bridges.

Let's say that, instead of spanning a watercourse, you want to stop the water flow on its tracks. PS Technologies is also working on an inflatable water barrier using a technology similar to that used in hangars and bridges.

It would consist of an array of inflatable tubes anchored to the sea floor. When needed, they could be filled with water to create a barrier that would raise up to the surface creating a lightweight breakwater.

This flexible barrier could be raised whenever sea conditions threatened to damage coastal areas, but would remain deflated below water the rest of the time, in order to minimize the impact on the local environment and biodiversity.

Could one answer to the damage wrought by rising sea levels lie in a hangar in the Arabian sands?