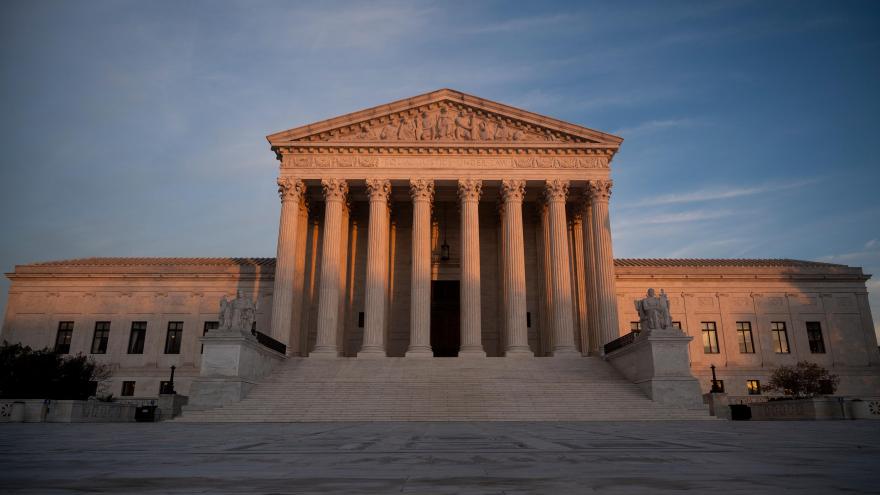 By Zachary B. Wolf, CNN

(CNN) -- The decision by Supreme Court Justice Stephen Breyer to retire will ignite a much-watched confirmation process in which President Joe Biden will attempt to place another liberal on the high court. Here's how the process to replace him could play out.

Biden will nominate a successor. He has promised to nominate a Black woman. Lists of qualified candidates have already beenpublished by news outlets like CNN. Biden will likely interview a short list of candidates. The White House will try to keep the pick secret until it makes an official announcement. There will be drama. And then a nomination.

After the nomination is made, there will be hearings in the Senate Judiciary Committee, which is chaired by Illinois Democrat Dick Durbin. Activist groups and senators will pore over the nominee's record. Usually the candidate is a judge, but there's no requirement in the Constitution that the person be a judge or even a lawyer. That's just the recent custom.

How long does it take to confirm a Supreme Court justice?

The confirmation process timeline varies. For instance, with the 2020 election bearing down and the likelihood they would lose control of the Senate, Republicans pushed through Amy Coney Barrett's nomination in lightning speed -- less than a month. Before that, the last nomination to proceed to confirmation in less than two months was Ruth Bader Ginsburg's back in 1993. These things usually take months.

But Democrats may well lose control of the Senate in the November midterm elections, so they'll work to move this process along. Senate Majority Leader Chuck Schumer is looking to the Barrett timeline as a model, according to CNN's reporting.

How many votes does it take to confirm a new Supreme Court justice?

It takes 51 votes in the Senate -- a simple majority.

Republicans are adamant about maintaining a 60-vote threshold for legislation. But they actually nuked the filibuster for Supreme Court nominees during the Trump administration, so confirmation takes only a simple majority.

Vice President Kamala Harris can break a 50-50 tie, which is a real possibility in these partisan times. There are 50 Republicans, 48 Democrats and two independents who usually vote with Democrats. It's a split chamber.

Will any Republicans vote for Biden's nominee?

Overwhelming support for nominees, regardless of their political views, used to be routine. Breyer is seen as a liberal justice but he was confirmed 87-9. That kind of bipartisanship has not been seen in recent years.

None of President Donald Trump's nominees received more than 54 votes. Keep an eye on the more moderate Republicans, like Sens. Susan Collins of Maine and Lisa Murkowski of Alaska.

Will all Democrats vote for Biden's nominee?

West Virginia Sen. Joe Manchin has shown himself to be perfectly willing to buck the party line. Democrats will have to find a nominee he can support, but will also need to consider other potential wild cards in the Senate.

What will the top issues be?

Voting rights is sure to be a key issue as Democrats make that one of their top priorities heading into the 2022 midterm elections and after a raft of decisions by the current court.

Abortion has previously been a key issue during nomination battles. The current court seems poised to either overturn or drastically scale back Roe v. Wade.

How long is a Supreme Court justice's term?

A Supreme Court justice's term is for life! Or until he or she retires. That's been interpreted as giving the justices life tenure.

Breyer was 56 when President Bill Clinton picked him in 1994.

Most justices are in their late 40s or early 50s when they're nominated. Neil Gorsuch and Brett Kavanaugh, who were appointed by Trump, are both in their early to mid-50s. Barrett is 49. If she serves until she's 87 like Ginsburg, she would be on the court for almost 40 years.

But do most Supreme Court justices serve that long?

The average length of a Supreme Court tenure has grown a lot. Harvard Business Review did an actuarial analysis in 2018 and argued the average tenure over the next 100 years will grow to 35 years. It was 17 over the previous 100 years.

That also means there will be fewer and fewer of these nominees, which is why Democrats have been itching for Breyer to retire while they control the White House and the Senate.

How do Supreme Court justices decide to retire?

Strategically. Justices have increasingly tried to time their retirements. Republican-appointed justices tend to wait for Republican presidents -- like Anthony Kennedy, who retired in 2018, allowing Trump to pick his successor.

Breyer has been under intense pressure from Democrats to retire now, when Democrats hold the White House and the Senate.

Ginsburg tried to pick her moment, and it backfired horribly for her political allies.

She wanted the first female President to pick her replacement, so she declined to retire during the Obama administration, hoping that Hillary Clinton would get to name a successor. Instead, Ginsburg died on the bench with just enough time for Trump to appoint a successor. Now, a woman's right to an abortion is likely to be curtailed by the more conservative court she left behind.

The same thing could have happened with Antonin Scalia, the Republican-appointed justice who died at the end of Obama's term. But because then-Senate Majority Leader Mitch McConnell refused to even allow a hearing on Obama's nominee to replace Scalia, the court's conservative majority was protected.

What about the idea that the American people should have a say in their court?

We live in a republic, where the Electoral College picks the President and senators confirm Supreme Court justices. And we are, increasingly, governed by people who represent a minority of Americans. That will continue on the court for a long time. In 2020, CNN senior political analyst Ron Brownstein wrote a very thoughtful piece on this undemocratic element of US democracy.

Could and should the Supreme Court be changed?

A lot of Democrats think it should. They would like to either expand the size to dilute the influence of the conservative majority or impose term limits to create more turnover.

A commission appointed by Biden found near consensus for imposing term limits on justices, and suggested adding justices to the nine-member Supreme Court would be more controversial. The White House has not endorsed any specific reform plan.

What does the Constitution say?

The Constitution gives Congress the ability to set the makeup of the court. And its words have been interpreted to give justices life terms. But the actual words are different, saying justices shall serve during times of "good behavior."

It doesn't list a term or an end date, so one has never been applied. That doesn't necessarily mean it couldn't. But how this would be accomplished would be up for debate.

The judicial Power of the United States, shall be vested in one supreme Court, and in such inferior Courts as the Congress may from time to time ordain and establish. The Judges, both of the supreme and inferior Courts, shall hold their Offices during good Behaviour, and shall, at stated Times, receive for their Services, a Compensation, which shall not be diminished during their Continuance in Office.

What about changing the size of the Supreme Court?

This could more easily be accomplished. The size of the court went up and down pretty regularly during the first 100 years of the US. But it's been set at nine since the 1860s. Franklin D. Roosevelt tried and failed to expand the court to 15 justices in the 1930s.

Several Democrats, notably Pete Buttigieg, were pushing a similar idea during the last presidential primary. The most important Democrat right now, Biden, has said he opposes it.

How do most Americans feel?

Supreme Court vacancies are usually more of a motivator for Republican voters than for Democratic ones. That may not be the case now that Republican-appointed justices have such a strong majority.