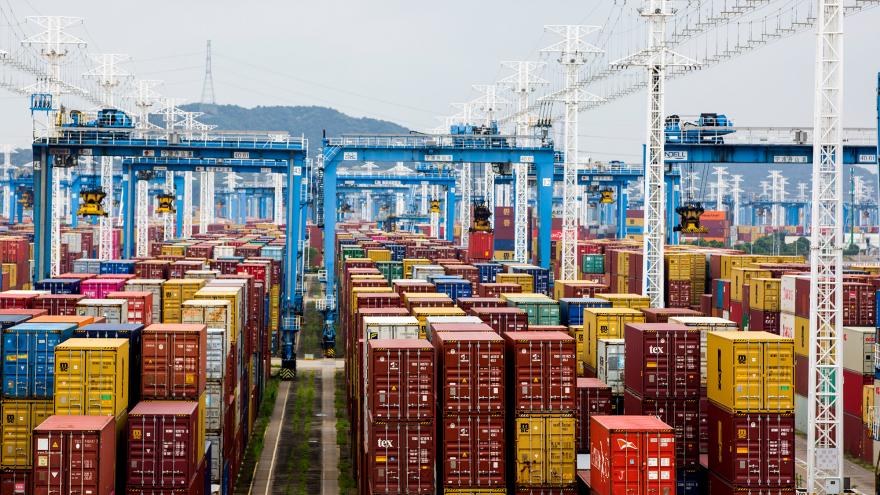 (CNN) -- The 30,000 aluminum tins were supposed to show up in a 20-foot shipping container in July. Months later, they haven't arrived — and SJ Hunt, the co-founder of Lavolio, a boutique confectionery in London, is starting to panic.

The made-to-order boxes, which Lavoliopackswith fruit, nut and jelly-filled chocolates, are a key part of the brand, and Hunt paid top dollar to ensure they'd make it from the manufacturer in East Asia to a port in Suffolk, England.

Renting a shipping container for this route usually costs Hunt and partner Lavinia Davolio between $1,500 and $2,000. This time, they had to shell out more than $10,000 — a hefty sum to spend on something that hasn't actually turned up.

"The long and short of it is it's been a nightmare, and unprecedented for us," Hunt said.

Roughly 18 months into the Covid-19 pandemic, global shipping is still in crisis, with backlogs looming over the peak holiday shopping period. One look at the market for steel shipping containers, and it's clear that a return to normal won't happen any time soon.

Before the coronavirus hit, companies could rent a humble 20-foot or 40-foot box with relative ease, allowing them to move goods at a low cost. Containers have a lifespan of about 15 years before they're recycled into low-cost storage or building solutions.

But empty boxes remain scattered across Europe and North America, while supply chain delays mean even more are needed to fulfill orders. Demand for goods, meanwhile, has soared — giving the network of ships, containers and trucks that deliver merchandise around the world little time to catch up.

As a result, containers have become incredibly scarce and extremely expensive. One year ago, companies would pay roughly $1,920 to book a 40-foot steel container on a standard route between China and Europe, according to data from Drewry, a maritime research consultancy. Now, firms are spending more than $14,000, an increase of more than 600%. Meanwhile, the cost of buying a container outright has effectively doubled.

Businesses everywhere are struggling to cope. Furniture giant Ikea has bought its own shipping containers to try to ease some logistical headaches. But that's not an option for a small candymaker like Lavolio, which is rethinking its expansion plans and may have to raise prices — a sign of the broader damagecaused by supply chain problems that won't go away.

For months, global supply chains have been stretched to their breaking point, triggering shortages of items from computer chips to McDonald's milkshakes.

Container boxes have played a central role in the chaos. When the pandemic hit, major shipping lines canceled dozens of sailings. That meant emptyboxes weren't picked up before China's export sector began tobounce back, and global demand for consumer products like clothing and electronics surged.

The glut of empty containers — or "empties," in industry lingo —has persisted as coronavirus restrictions continue to snarl operations at ports and depots, and as shipping costs have continued to rise.

"Do we see more empties in port? Yes, we do," said Emile Hoogsteden, vice president of commercial at the Port of Rotterdam in the Netherlands, the largest port in Europe. Rotterdam has had to create extra storage capacity for the containers as "a temporary solution."

One point of friction is that a lot of the cargo going from Europe back to Asia is low-value materials like waste paper and scrap metal, Hoogsteden said. As shipping prices have gone up, those trips aren't worth it anymore, leaving boxes stranded.

Another issue is that containers in circulation are getting held up for extended periods of time. That means more boxes are needed to execute shipments and to avoid getting even further behind schedule.

"If you look at container usage, we need significantly more boxes to move the same amount of cargo as we get them back, on average, 15% to 20% later than normal," Rolf Habben Jansen, the CEO of Hapag-Lloyd, one of the world's largest container shipping lines, said on a call with analysts last month.

Konstantin Krebs, managing partner at Capstan Capital, an investment banking firm that works with investors in containers and container shipping, said backlogs at ports mean it can currently take ships up to four times as long to dock and unload goods.

"These ships are now sitting there for seven to eight days with all the containers on them," he said. "That takes a lot of containers out of the market."

Working through bottlenecks has been a priority, but long lag times persist, thanks in part to the sheer volume of goods that need to work their way through a clogged system. Global merchandise trade is about 5% higher than it was before the pandemic, according to the CPB Netherlands Bureau for Economic Policy Analysis, and China just posted a new trade record last month.

The physical shortage of containers is one reason the cost of buying or booking a container has skyrocketed.

"We are seeing record high rates, particularly on the spot market," said John Fossey, head of container equipment and leasing research at Drewry, referring to the just-in-time reservation of trips on ocean carriers.

But it's not the only contributor. Fossey also noted that the companies that make containers, which are largely based in China, have had to contend with rising raw material costs. Shipping crates are largely made from a special type of steel that resists corrosion, and it has gotten significantly more expensive, as have flooring materials like plywood and bamboo, he said. The cost of paying workers has gone up, too.

For the financiers who invest in shipping containers — which boast solid, stable returns and are a popular alternative asset — the market environment is favorable. Higher upfront costs are offset by leasing arrangements, while those selling containers can net greater profits.

He noted that since it now costs more to obtain containers, leasing companies are asking carriers to sign longer contracts. That could bring in a new class of investors looking for a steady income as interest rates remain at record lows.

For those looking to rent boxes for the shorter term, however, the situation is a huge headache.

Even the cost of buying containers on the secondary market for storage or retail space has skyrocketed. Sanjay Aggarwal, co-founder of Spice Kitchen, a spice and tea company based in Liverpool, England, said he paid triple what he'd normally be charged for empty shipping containers that he uses to store products nearby.

That's on top of paying three times the normal rate to ship spice tins from India.

"We've got thousands of pounds we're not going to recoup, and that's just sadly down to those shipping costs," Aggarwal said.

No end in sight

Experts in the container industry aren't sure when prices will ease. But they do agree on one thing: The situation isn't going to be resolved any time soon.

"It's quite specifically calculated, that whole rotation [of containers]," said Osmo Lahtinen, managing director at O. V. Lahtinen, a container supplier based in Finland. "When that is broken one time, it's really difficult to get back to normal after that."

Fossey thinks that Chinese New Year in February 2022 could provide some respite, since it will ease the pace of exports as factories shut. But given how backed up the system is, and how much people are still buying, that's far from a given.

"This is a pandemic-induced buying surge ... the likes of which we've never seen before," said Gene Seroka, executive director at the Port of Los Angeles, the largest trade gateway in North America. While that's positive for the global economy, it could mean supply chain issues persist until 2023, he continued.

That means more pressure on businesses like Lavolio and Spice Kitchen, which are now forced to weigh whether to raise prices for their customers to help offset their pain.

"We're going to have to rethink things, because we can't absorb these costs more than once," Hunt of Lavolio said.