How the country's law enforcement is bracing for Election Day 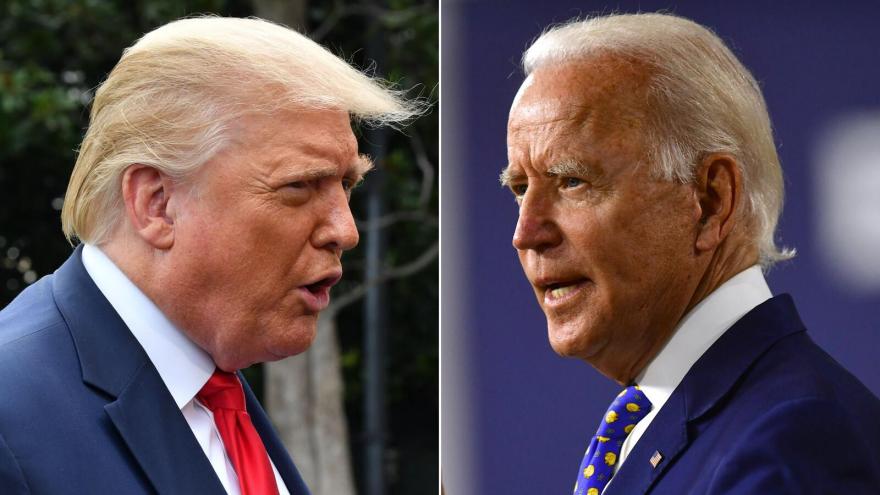 President Donald Trump has for months sought to undermine the integrity of mail-in ballots and that of the upcoming election -- particularly, in the event he loses to former Vice President Joe Biden.

(CNN) -- Secret Service officers are getting new laser-blocking sunglasses. LaFayette Park, that iconic center of protest, has been fenced off months before the usual Inauguration Day shut down.

And within the White House gates, aides to President Donald Trump have held more than five dozen meetings to discuss contingency planning for the hours and days after the polls close, according to administration officials who requested anonymity to discuss the secretive plans.

City and federal authorities across the country, anticipating the high potential for unrest in the hours and days following this year's election, are making contingency plans for "worst-case scenarios," particularly if there is no clear winner come November 4. That includes -- in Washington, the capital -- reinforcing officers with new equipment and holding training drills that ensure law enforcement is prepared to quell any violence or looting that might occur, while also protecting people's right to protest, said a city official, who was not authorized to speak on the record. The stepped-up training schedules are in anticipation of the election, the official said.

The immediate perimeters around the White House have been largely blocked off to the public this year for a range of reasons, from construction on the White House gate, to protests and looting that occurred in downtown Washington in the wake of the death of George Floyd this summer. Lafayette Park, across the street from the north side of the White House and a popular protest gathering spot, has also largely been fenced-in since police aggressively moved in on protesters alongside it in July.

That is likely to continue in the coming weeks as federal authorities look to keep the public as far from the White House gates as possible.

This year's unprecedented circumstances, from the Covid-19 pandemic to the uptick in civil unrest in cities across America, coupled with a hyper-polarized political landscape, has federal and local law enforcement officials bracing for mass protests that could potentially spin out of control.

Trump has for months sought to undermine the integrity of mail-in ballots and that of the upcoming election -- particularly, in the event he loses to former Vice President Joe Biden. But experts say the Constitution supersedes individuals, and law enforcement will be ready to protect the Constitution should the election result in a Biden win.

"It's career government officials who enact the change, and so the transfer of power will happen whether the President likes it or not," said Jonathan Wackrow, a former Secret Service agent and now, head of Global Security for Teneo, a security consultancy.

Several federal and city law enforcement officials described similar scenarios to CNN to explain how they are planning for November 3 deployments.

And since January, more than five dozen meetings have taken place in an effort to prepare various agencies for all likely scenarios, according to a senior administration official, and nearly 100 meetings in the past year, two other law enforcement officials said. Those meetings have included the White House National Security Council, the Office of Personnel Management, the Federal Emergency Management Agency, the various intelligence agencies and the military, the official said. This level of contingency planning is standard practice ahead of a national election, the official said.

In the event that Trump secures re-election outright, federal and city officials said that large-scale demonstrations are expected in major Democratic-majority cities across the country, especially in New York City and Washington, DC.

Should Biden win outright, those same officials do not expect the same large-scale protests but are preparing for them nonetheless.

"You won't see wide-scale demos in that scenario, but law enforcement will have to scale up cities like LA, DC and NYC," where law enforcement officials believe far right wing extremists could take to the streets in the event of a Trump defeat, said Wackrow, who is also a CNN analyst.

Trump has worked to cast doubt on the integrity of the election and has avoided saying whether he'd accept the results should he lose.

"It doesn't matter," said Wackrow. "If Biden is the clear winner and Trump tries to stay put the Constitution and the law supersedes the individual."

The third scenario that agencies across the board are preparing for seems just as likely: What if there is no clear winner come November 4?

According to David Priess, a former CIA intelligence officer and author of the upcoming book "How To Get Rid of a President: History's Guide to Removing Unpopular, Unable, or Unfit Chief Executives," there is "one awkward truth."

"No matter what happens, President Trump is the President until January 20," Priess said. "He continues to exercise the full powers and duties of the office including receiving intel briefings and having access to any intel he wants and the power to run the executive branch."

"But law enforcement is also required to defend the Constitution, and that requires them to uphold the results of the election," Priess added.

Contingency planning ahead of a big election is standard practice, but agencies across the board acknowledge that the current political environment has at least increased the potential that "worst-case scenario" planning could be ordered, should violence break out.

Role of the sitting president

Presidents typically don't take part in this type of planning, although the National Security Council is involved. Most of the discussions are logistical and so the President receives very general updates. And even if Biden emerges victorious in next month's vote, Trump is still President until Inauguration Day, so federal law enforcement would ultimately be deployed under his command.

To promote the orderly transfer of power, Congress established the framework for the federal government to prepare for a transition from one president to another. The act states that it is up to Congress to authorize appropriate actions

"The national interest requires that such transitions in the office of President be accomplished so as to assure continuity in the faithful execution of the laws and in the conduct of the affairs of the Federal Government, both domestic and foreign," the law reads. "Any disruption occasioned by the transfer of the executive power could produce results detrimental to the safety and well-being of the United States and its people."

DC Metro police has also been preparing its officers for well over a year, as it does ahead of every general election, ensuring that they are prepared to handle everything from civil disturbance to crowd control to potential disruptions to metro transit, said Patrick Burke, executive director of the Washington, DC, Police Foundation.

Police have also been working with intelligence officials to ensure the security of Washington, DC's airspace in the event of an attack from above, Burke added, as they routinely do when preparing for moments of heightened anxiety.

Army Secretary Ryan McCarthy said this week that there have been no requests from other agencies to have the National Guard on standby as of yet, but he added, "we're always available to support, whether it's Metro P.D. or other federal agencies."

An FBI official told CNN the bureau is also working closely with partners at the state and federal level to identify and stop any potential threats to public safety.

"Our preparations for 2020 take into account the current climate of the country," the official said, adding that they have a "plan for a host of potential scenarios.

"We gather and analyze intelligence to determine whether individuals might be motivated to take violent action for any reason," the FBI official said. "It is vital that the FBI, our law enforcement partners, and the public work together to protect our communities as Americans exercise their right to vote."

The Justice Department is also gearing up to have officials stationed at a command center at FBI headquarters to coordinate the federal response to any disturbances or other problems with voting, another administration official said.