How significant are the US sanctions on Russia? 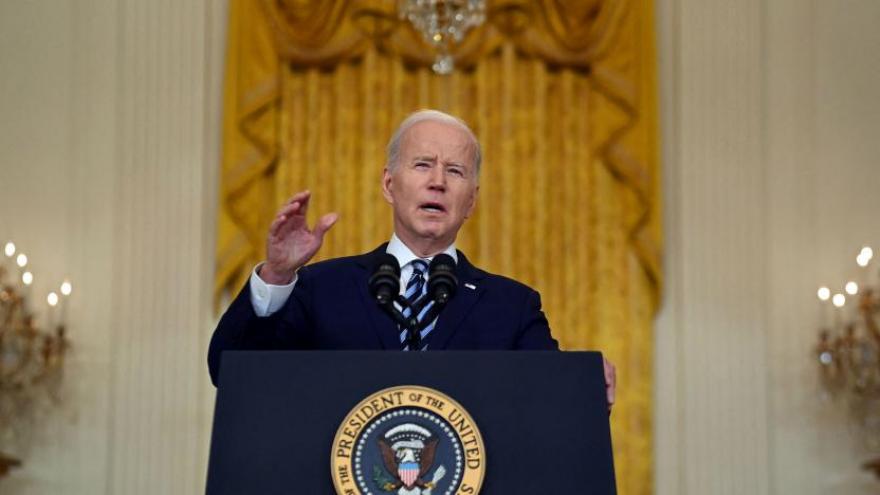 President Joe Biden addresses the Russian invasion of Ukraine, from the East Room of the White House on February 24.

(CNN) -- US President Joe Biden unleashed sweeping sanctions Thursday responding to Russian President Vladimir Putin's attack on Ukraine that target Moscow's banking, technology and aerospace sectors, though the US and Europe stopped short of several key steps to target Moscow -- and Putin himself.

Still, the scale of the package -- crafted over weeks of intensive technical and diplomatic negotiations -- marks the most significant deployment of economic penalties against a country with Russia's economic size and integration in global markets. The US levied penalties across industries, from asset freezes for the largest banks to debt and equity restrictions on critical mining, transportation and logistics firms.

The package also included the largest-scale effort to date to shut down access to critical technology for key Russian military and industrial sectors. It also expanded the US strategy of targeting the adult children of key players and businessmen in Putin's inner circle.

The sanctions, perhaps most critically, were deployed in concert with Western allies in a show of force that underscored unified outrage with Putin's actions while at the same time limiting potential holes in the package that could be exploited by Russian companies.

"These sanctions are completely unprecedented in their strength," said Julia Friedlander, a former Treasury Department and National Security Council official and director of the economic statecraft initiative at the Atlantic Council. "It really is taking a hatchet to Russian financial markets and the ability to move money around."

For days, Biden's top aides telegraphed devastating sanctions targeting Russia's banking system in the event of an invasion and Thursday's actions made clear it wasn't a bluff, as banks totaling more than $1 trillion in total assets were slapped with sweeping penalties.

Ukraine and some lawmakers call for more

At the same time, Ukrainian leaders and some US lawmakers urged Biden to go even further to punish Moscow and Putin for the attack on Ukraine.

In particular, there was disappointment that the round of sanctions unveiled by the US and Europe following the Russian invasion did not remove Russia from the SWIFT financial messaging system. "We demand the disconnection of Russia from SWIFT," Ukrainian President Volodymyr Zelensky tweeted Thursday.

Removal from the secure messaging system, which serves as the backbone of global banking payments, trades and currency exchanges, has long been viewed as the equivalent of a financial nuclear weapon -- the harshest penalty that could be imposed on a country integrated in global markets.

Senate Foreign Relations Chairman Robert Menendez, who tried unsuccessfully to negotiate a bipartisan Russia sanctions package earlier this month, praised the US sanctions in a statement Thursday, but called for more action.

"As we seek to impose maximum costs on Putin, there is more that we can and should do," the New Jersey Democrat said. "Congress and the Biden administration must not shy away from any options—including sanctioning the Russian Central Bank, removing Russian banks from the SWIFT payment system, crippling Russia's key industries, sanctioning Putin personally, and taking all steps to deprive Putin and his inner circle of their assets."

House Intelligence Chairman Adam Schiff said in an interview with MSNBC Thursday that he was "satisfied" that the alliance had been renewed against Russia, but he supported going further.

"I favor expelling them from SWIFT. I favor imposing sanctions directly on Vladimir Putin," the California Democrat said. "This is an unprecedented situation, and even though we don't generally sanction heads of state, on occasion we do, and I think it's merited here."

Republicans pressed Biden for tougher sanctions, arguing the steps taken Thursday weren't enough. "Leveling additional banking sanctions and export controls against Russia and Belarus is a necessary move, but these actions are a far cry from the 'swift and severe' and 'unprecedented' sanctions President Biden promised for months," the top Republicans on the House Foreign Affairs and Armed Services Committees, Reps. Mike McCaul of Texas and Mike Rogers of Alabama, said in a joint statement.

SWIFT and Putin sanctions remain on the table

Biden told reporters Thursday that removing Russia from SWIFT and sanctioning Putin personally remained on the table, though he openly acknowledged that Europe was not willing yet to take the step on SWIFT.

"It is always an option, but right now that's not the position that the rest of Europe wishes to take," Biden told reporters.

Biden's comment underscored a reality that convinced US officials weeks ago that the European will to disconnect Russia from the SWIFT financial system was unlikely to coalesce.

US officials repeatedly said it was on the table, but candidly acknowledged that the reliance of EU countries on the system to pay for Russian energy made the push a long shot. It was, after all, not a move the US can make unilaterally, officials said. The Brussels-based cooperative operation would only cut off access to an institution or company in response to EU sanctions.

The US and its allies also didn't directly sanction Putin himself, even as officials have maintained it's an option they could pursue.

Sanctioning Putin directly is unlikely to have a tangible effect on his finances, which remain as shielded as they are immense. But there is significant symbolism behind the move, and Biden reiterated it remains on the table on Thursday. For the moment, however, US officials have trained their sights on top Putin associates and their relatives as a way to impose pain on the country's leadership.

The sanctions that the Biden administration imposed Thursday on Russia's first and second largest lenders, Sberbank and VTB Bank, were separate actions designed to severely restrict operations and reshape their overall business. The US deployment of full blocking sanctions on VTB Bank, one of the largest institutions ever to face penalties of that scale, would freeze all assets held in US financial institutions and hinder its ability to operate within the global financial system.

A central pillar of the effort, however, went beyond asset freezes and financial sanctions to blocking entirely key technologies from entering Russia. It was constructed to restrict access to the technology required to sustain Russia's defense, aerospace and maritime sectors. The joint effort was aligned with the European Union, as well as several other key Western allies including the UK, Japan and Canada.

In total, the effort is designed to atrophy Russia's industrial base by robbing it of key components needed to carry out everyday business. It also provides a singular window into an expansive diplomatic effort over the course of the last several months, where US officials strained to keep Western countries aligned amid divergent equities, domestic political considerations and even bilateral relations with Putin himself.

The US view of the necessity of keeping European allies on board, combined with a desire to mitigate domestic economic pain, drove the calculated decision not to directly target Russia's economic driver -- its energy sector, where EU countries were likely to oppose harsh sanctions. As a result, the bulk of Putin's exports and revenues remain in place, even as every other sector of the Russian economy is likely to come under new, and in some cases acute, strain.

Targeting Russia's energy sector also could have had an impact on US energy and gas prices because it could have driven worldwide energy markets upward.

"It's the one big thing that would cause a huge issue for Biden at home with energy prices," Friedlander said.

Biden and US officials had been warning for weeks they had prepared devastating sanctions in the event that Putin invaded Ukraine. While administration officials had previously suggested the threat of sanctions was intended to deter Putin, Biden said Thursday that "no one expected the sanctions to prevent anything from happening."

"This is going to take time," Biden said. "And we have to show resolve so he knows what's coming and so the people of Russia know what he's brought on them. That's what this is all about."