How Puerto Rico became the most vaccinated place in America 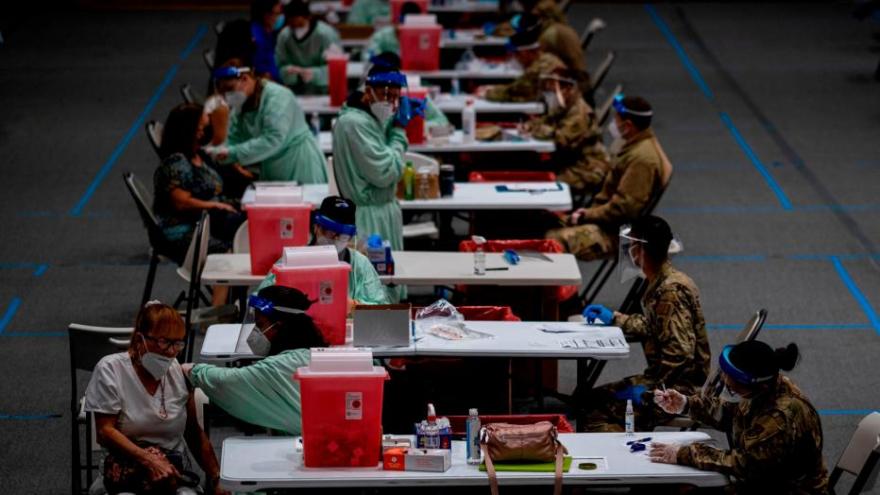 (CNN) -- A member of a scientific coalition advising Puerto Rico's government on the coronavirus pandemic recently joked about the island's high Covid-19 vaccination rate, attributing it to the proliferation of drug store chains on the island.

"There is a Walgreens on like every corner," said Rafael Irizzary, a professor of biostatistics at Harvard's T.H. Chan School of Public Health. "Everywhere you go, they have everything you need. Rum. Coffee. You get your fireworks and then you go get a vaccine."

Irizzary was only half joking about vaccination rates and Puerto Rico's more than 100 Walgreens outlets.

The Caribbean island -- in recent years pummeled by deadly hurricanes, rocked by earthquakes, beset by political unrest and saddled by debt -- has quietly managed to outpace even New England states with the highest vaccination rates in the country.

"All those emergencies and collective trauma primed Puerto Rico and the leadership, the scientific community, the healthcare community," said Daniel Colón Ramos, a Yale medical school professor who presides over the coronavirus coalition advising the government. "There was a sense of urgency. A lot of people that I have worked with, their attitude was like: Not on my watch. Not again."

Puerto Rico has fully vaccinated just over 73% of its 3.3 million residents, according to the US Centers for Disease Control and Prevention. That's more than 2.3 million people.

The island has the highest rate of total vaccine doses administered, with 154,563 per 100,000 people. It had administered 4.9 million doses as of Friday, according to the CDC.

On the mainland, Vermont leads with 70.8% of the population fully vaccinated, followed by Connecticut at 70.2% and Maine at 70%, according to the CDC, which added that just over 57% of the total US population was fully vaccinated as of Friday.

"Best I can tell, they've done this largely by not tying vaccines to politics," Jha wrote last weekend. "They pay less attention to mainland politics. All their political parties actively support vaccinations. And generally, political [identity] & vaccinations are not intermixed."

Not only is Puerto Rico poor compared to much of the mainland, Jha noted, but it also has a larger population than 21 states. It's about "5 times bigger" than Vermont, he wrote. The poverty rate on the island was about 43% in 2018, compared to 13% at the national level and more than double Mississippi's 19.7%, according to the US Census Bureau.

'A lot of saved lives'

"It represents a lot of saved lives," Colón Ramos said of the island's vaccination success. "It's really about the fact there are hundreds of people -- if not thousands -- right now walking around somewhere in Puerto Rico and they wouldn't be there if it wasn't for these efforts."

"It's a collaborative exercise," said Cardona, who is overseeing the vaccination program. "Given the difficulties that the whole world knows Puerto Rico has endured in the last five years -- hurricanes, earthquakes, political and fiscal crises -- the Puerto Rican people at all levels have cooperated."

That cooperation has included both vaccine education programs and vaccination events.

Throughout the pandemic, the island's government has implemented lockdowns and other restrictions, issued mask and vaccination mandates and put in place stringent indoor dining and social distancing rules, according to members of the Covid-19 coalition.

"In the cultural context of Puerto Rico, the social distancing is not something that comes easy to us as Puerto Ricans -- we want to be close," Colón Ramos said. "But people have managed to navigate that very well."

'Coherent message ... based on scientific evidence'

While some states have fiercely resisted Covid-19 restrictions and vaccine mandates, the US territory has not.

"Right now the legislature is controlled by one party, the governorship is controlled by another party, but in spite of those differences... wanting to save lives during the pandemic was never politicized in Puerto Rico," Colón Ramos said.

"Difficult decisions were made and criticized," he said. "But, for example, mask mandates were never really politicized. The importance of vaccination was never made into a political issue. It helped to send a coherent message that was based on scientific evidence."

Puerto Rico has had at least 151,245 confirmed Covid-19 cases and 3,219 reported deaths during the pandemic, according to the island's health department. Connecticut, which is about the same size as Puerto Rico, has had more than 400,000 Covid-19 cases and 8,721 deaths.

Dr. Víctor Ramos, a pediatrician and president of the island's Association of Physicians and Surgeons, said mass vaccination centers were set up by the National Guard in shopping malls throughout the island.

There were door-to-door vaccination events in remote rural towns, where shots were administered in homes, particularly to the elderly and bedridden.

"We will go wherever we need to go to vaccinate people," Ramos said. "After (Hurricane) Maria many people were holed up in remote towns and we had to get out there to help them. We're doing the same now with the vaccine."