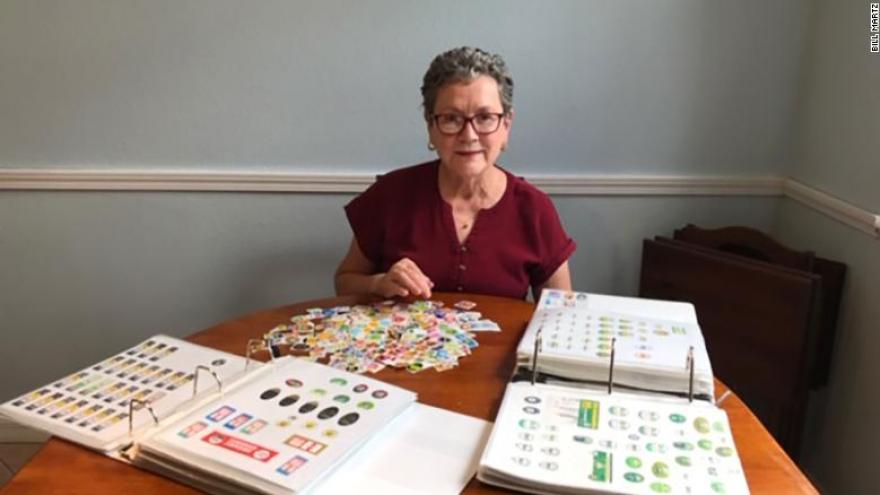 (CNN) -- If you see a 70-year-old woman digging through a trash can for discarded banana peels in Florida, you may have spotted one of the world's most unique collectors.

Becky Martz, of Orlando, has spent the past 29 years fastidiously collecting and cataloging more than 21,000 banana labels from around the world.

Martz's hobby has led her to Germany, Costa Rica and Ecuador where she's met with fellow collectors and picked up random banana labels, she told CNN via email.

"What makes them special to me is that they are ephemeral. They are meant to be thrown away," Martz told CNN. "For some reason, that makes them even more precious to me. I have rescued many labels from the trash or a banana peel on the ground. I feel sad when I see someone has thrown a peel away with the label still on it, so I rescue it."

Martz's rarest banana label dates back to the 1960s. It is the blond Jacko label featuring a little boy whose coiffure is made up of little bananas.

"Early labels like this have hard glue enacted by moisture instead of the adhesive we are used to," Martz said. "This label was a Christmas gift a few years ago from a guy in Sweden."

Building a collection and global network

Martz first noticed how unique banana labels were in 1991.

She was restocking her fruit bowl when she saw how the old Dole banana labels were from Guatemala and the new ones were from Honduras.

By Christmas of that year, Martz's curiosity grew after Chiquita had put a label on their bananas that said "The Perfect Stocking Stuffer." This was the first label she kept.

That one label quickly grew to 17, thus necessitating the need for a small photo album to store them.

A few years later, one of Martz's sons discovered that his mom was part of a small, yet vibrant, banana label-collecting community that spanned the globe. While searching around the nascent internet in the mid-1990s, Martz's son, Carl, found a handful of rudimentary websites belonging to other banana label enthusiasts from around the world.

Martz has since attended banana label collector meetings around the world, including one of the largest gatherings in Costa Rica in 2008.

It is unclear, exactly, how many collectors there are around the world. Martz estimates that there might be 25 in the US, roughly 50 in Asia and 200 in Central and South America.

"Many of the collectors work in the banana business but when I was in Costa Rica it seemed like every other person from the hotel maids to store owners had a collection. Most of them had no interest in trading, just in collecting from bananas themselves," she said.

The business and science of collecting

Indeed, banana labels are far from the strangest thing, says Christian Braun, who started hobbyDB, an online home for collectors to discuss and sell everything from Hot Wheels to corkscrews. Those oddities have included "airline sick bags, used telephone cards, bottle caps, tea bags (when that was a thing) and all kinds of other things," Braun said in an email.

When Braun was 8 years old, he had a nonagenarian neighbor who had collected 120,000 postcards. That neighbor's obsession was part of the inspiration for hobbyDB.

Braun, who is CEO of the Colorado-based company, says the site features more than 500,000 items in its database that cover more than 150 different types of collectibles (although not banana labels).

"Each has its own groups, clubs, and special terminology," Braun added. "For example, collecting sugar packets is referred to as 'sucrology.'"

One person who has studied the world of collectors is Russell Belk, a marketing professor at Canada's York University. Belk published the paper "Collections and collecting in a digital age" in 2016, which examined "material collections, the processes involved in collecting, and collectors themselves," according to its abstract.

Citing the work of Israeli sociologists Brenda Danet and Tamar Katriel, collectors fall into one of two categories, Belk said in an email.

Type A collectors collect in areas that have a finite series, like all Israeli coins from the 20th century. These people order these objects and are typically considered more serious collectors, Belk said.

Type B collectors are moved more by the objects that touch them, such as aesthetic things like paintings, but not because of their place in art history, Belk said.

"People may find something intriguing or interesting and start observing more carefully and then collecting. Or they may be given a 'seed' item and start collecting more. Or they may notice that they have three or four decorative penguins and come to the realization that they must be a collector," Belk added.

The future of banana label collecting

Time marches on for the world's banana label collectors, who are largely older.

The collector population is much smaller and the distances between each have only grown over time, Martz said.

"The sad fact is that a couple of the biggest collectors have died and the rest of us are aging," she said.

It has been years since Martz has attended a collector gathering as travel has become more difficult after her husband, Bill, was diagnosed with Parkinson's disease.

Martz remains scrupulous in the preservation of her 21,000 banana labels. Each label is attached to graph paper and placed into one of nine large three-ring binder notebooks, alphabetically ordered by the first letter of the brand name. She has boxes full of duplicate labels ready to trade or send to new collectors.

"I have made many good friends through our shared love of banana labels. In fact, my husband says that I now collect banana friends," Martz said. "My best 'banana friend' is a guy in Slovenia. He has visited us a number of times. A few years ago, we went to his wedding in Ljubljana. They named one of their children after me."

Despite the lack of meetups, Martz's passion for collecting hasn't diminished. She still searches for a prized two-label set.

"In 1980, Chiquita printed some labels with the mascot of the summer Olympics called Misha," Martz said. "The US boycotted the summer Olympics due to the Soviet-Afghan War, so the labels were never used. A few escaped destruction. I don't have it, yet, but I am ever hopeful."