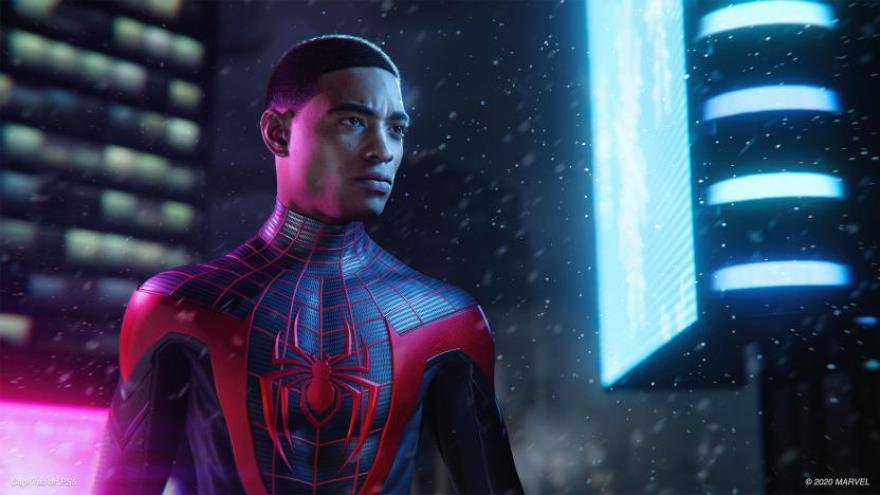 Miles Morales returns as the lead character in the second video game in Marvel's Spider-Man series.

(CNN) -- When Jorge Castro saw that Marvel's Miles Morales would be walking around New York's Spanish Harlem on the new Spider-Man video game, he quickly choked up.

"Representation matters... it matters," the 27-year-old YouTube gamer said, drying tears as he watched a gameplay trailer of "Marvel's Spider-Man: Miles Morales." "It's awesome to see my heritage, part of my heritage, being on display with a character that I love."

Morales, an Afro-Latino teen who develops powers when bitten by a spider, is the friendly neighborhood superhero of one of the games kicking off PlayStation's new console generation this week. As praise for the character's portrayal and the game itself piles up, people of color and experts hope the momentum that Morales is bringing into an industry lacking diversity is only the beginning of a new era for gaming.

Gaming is one of the largest and fastest-growing entertainment industries in the world. In the United States, there are more than 214 million video game players, and at least one person plays video games in 75% of the nation's households, according to the Entertainment Software Association.

About 83% of Black teens said they play video games compared to 71% of White teens and 69% of Hispanic teens, according to a 2015 Pew Research Center report. But creators and characters are largely White.

Tanya DePass, a diversity consultant and founder of I Need Diverse Games, a group dedicated to better diversification of all aspects of gaming, said some companies and studios are putting the effort to create meaningful change. Overall, however, she said the industry is moving at a "very glacial pace."

"Most of the games that we've got to play over the last 37 years have human protagonists who have been mostly White dudes," DePass said. "We may on occasion get a White woman or a racially ambiguous woman."

Frank Ellerbe grew up loving Peter Parker as Spider-Man. Discovering Miles Morales opened the doors for him to feel proud in his own skin.

"I think Miles Morales' Spider-Man is giving people that power to feel like they're empowered and not hide behind 'a mask,'" said Ellerbe, an entertainer on Twitch -- a video game platform -- who live streams under the handle Techniq.

Morales became a popular character in Marvel Comics' "Ultimate" series in the past decade and gained mainstream prominence in 2018 as the lead character in the Oscar-winning film "Spider-Man: Into the Spider-Verse."

His unique identity as a Afro-Latino teen from Brooklyn who is bilingual and bicultural has been a chance for the industry to resonate with diverse communities.

For Ben Arfmann, the video game's lead writer, and his team at Insomniac Games, fully celebrating Morales' identity was a priority since production began.

"We want to make sure any time a player picks up one of our games, especially this one, and they recognize themselves or somebody they love in one of our characters, that they feel really good about that moment of recognition that feels very aspirational," Arfmann told CNN.

"It was so important for us to get this representation right, and the only way to do that is to make sure you have enough voices in the room that can contribute and make sure that it does feel the way that you want it to feel," he said.

The team's research and detailed work has surprised fans, including Castro, who identifies as Puerto Rican, Dominican and Black, and who also grew up in New York.

While playing the game on Thursday, Castro witnessed Morales interacting with his mother in English and Spanish, and he noticed Puerto Rican flags decorating their apartment. Then he spotted one of the island's more unique symbols: a coquí.

"Oh my god there it is. They know, they know," Castro said, referring to a small figurine laying on a shelf meant to represent Puerto Rico's iconic little brown frog.

'We are not in the room'

Judy Barbosa, one of the co-founders for the advocacy group Latinx in Gaming, says Morales is one of the few good examples of representation in video game characters.

"There are so many examples of terrible, terrible Latinx representation in other games, because they are not written by us, because we are not in the room when people are designing," she said.

The latest survey by the International Game Developers Association shows that 81% of game developers identify as White, Caucasian or European. More than 80% of respondents said diversity in the workplace and in game content was important. About half of the people responding the survey work in the US.

To change that, Latinx in Gaming and several others groups have been focusing on creating more education opportunities for people of color already in the industry or with the potential to join it.

Xbox's parent company, Microsoft, has pledged to "double the number of Black and African American people managers, senior individual contributors, and senior leaders in the United States by 2025."

The company's diversity and inclusion report released earlier this year showed that nearly 5% of US employees are Black, 6.6% are Hispanic, and only 0.7% are Native American, Alaska Native, Native Hawaiian and Pacific Islander. The report does not provide specifics about Xbox's workforce.

DePass, who has worked as a consultant for multiple gaming companies, says some of the biggest challenges in creating more diverse content are getting people to understand why it's important, the work that is needed and making changes early in the production process.

"It's not just me looking at some artwork and going, 'okay, that's racist, that's not racist.' It's being able to have nuance and hopefully getting people to think about diversity inclusion when they're starting a project versus bringing someone in the middle, or actually toward the end, when it's too late," DePass said.

After years of calls to creators to explain why diversity matters, DePass says she is now simply telling them to do the work to make the industry more diverse.