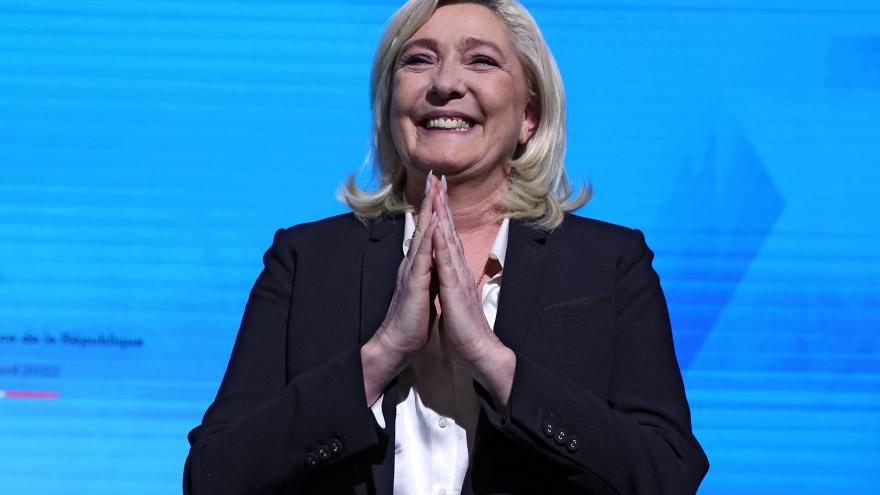 (CNN) -- France's presidential runoff will likely see Emmanuel Macron face off against Marine Le Pen for a second election in a row, but the woman challenging France's current leader is hardly the same candidate that lost by nearly two votes to one in 2017.

Le Pen, 53, is currently a member of the French National Assembly representing Calais, the city on the coast near the UK that has struggled to deal with migrants heading to Britain.

She is best known as a member of the French far-right's first family. Her father, Jean-Marie Le Pen, founded the National Front in 1972, a political party long viewed as racist and anti-Semitic. When the younger Le Pen took the reins from her father as party leader in 2011, she attempted to rebrand the National Front as more mainstream -- going as far as expelling her father from the political party he founded after he repeated his claim that the Nazi gas chambers had been but a detail of history.

Le Pen does, however, shares her father's views on immigration. In her failed campaign against Macron, she attempted to position herself as a French Donald Trump, claiming to represent the forgotten French working classes who have suffered in the wake of globalization and technological progress.

But her economic nationalist stance, views on immigration, euroskepticism and positions on Islam in France -- she wants to make it illegal for women to wear headscarves in public -- proved unpopular among the French electorate, as she was thrashed in her first contest against Macron.

In the weeks leading up to the first round of the election, Le Pen campaigned hard on pocketbook issues, often beginning interviews and media appearances by explaining to voters how she would help them cope with inflation and rising fuel prices, top issues for the French public.

The strategy appears to have worked. Le Pen polled far better in the 2022 first round than she did five years ago, and surveys from pollster IFOP have suggested that a Macron-Le Pen runoff could be as close as 53% to 47% in favor of the incumbent.

But some of Le Pen's other political positions could come back to haunt her in the runoff due to the war in Ukraine. She has long been a vocal admirer of Vladimir Putin, the Russian strongman who has become a pariah in the West due to the Kremlin's decision to attack its neighbor. Le Pen visited the Russian strongman during her 2017 campaign for president, but this time around, she was forced to scrap a leaflet with a photo of her and Putin from that trip after the invasion.

Her previous aversion to NATO -- Le Pen's 2017 campaign platform included pulling France from the alliance -- could also be a liability. Recent polling from IFOP shows that 67% of the French public do not believe France should leave NATO.