How long should you keep Thanksgiving leftovers? 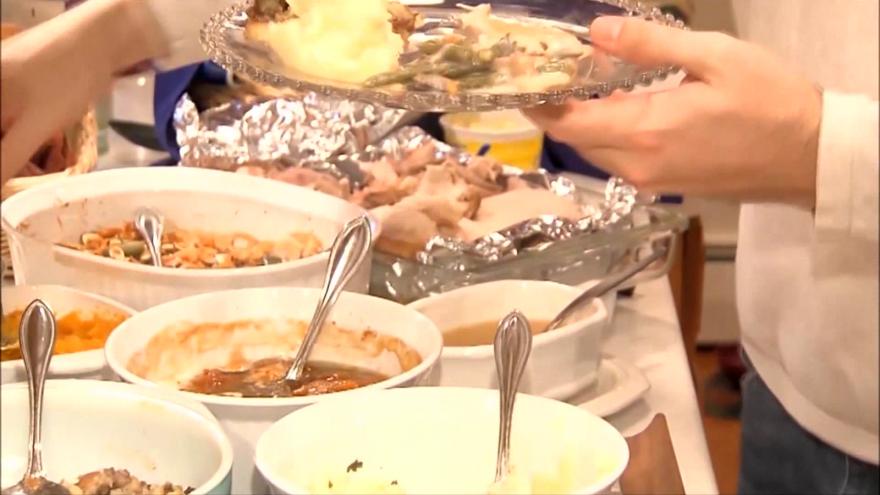 (CNN) -- The day after Thanksgiving may be called Black Friday for shoppers, but for the rest of the country, it could be known as "National leftover turkey sandwich day." But how long will those mashed potatoes and green bean casseroles last before they should be tossed? CNN released a list of what to keep and when you should chuck it after your Thanksgiving holiday feast.

Turkey and dressing/stuffing:
Hopefully, families wrapped their turkey and dressing leftovers within two hours of serving. Even if the leftovers are still warm, they can go in the refrigerator. Turkey stored in the refrigerators should be eaten within three or four days. Casseroles and mashed potatoes will last for a little longer, for three to five days. Foods that need to be kept longer should be put in the freezer. Once frozen, foods should be "good" indefinitely, though they may lose their flavor or desired consistency over time.

Pie
Dessert is delicious fresh out of the oven—but pies with egg-based fillings should not sit out for more than two hours. Pies will begin to grow bacteria if they sit out longer than that. Loosely wrap pies in foil or plastic wrap and put them in the fridge. Those pies should keep for three to four days. Don't forget: even store-bought pies should be refrigerated.

Frozen vegetables
Frozen veggies can be kept in the freezer indefinitely, though over time they may lose their taste or desired consistency. To keep them tasting their best, eat them within a year of purchasing them. Once they've been cooked or defrosted, they can be stored in the fridge for three to four days.

Bread and rolls
Ever thought it's a good idea to refrigerate bread to keep it lasting longer? Experts say refrigeration dries out the bread and makes it stale. Instead, keep it in the pantry for about a week. To make it last even longer, wrap it tightly in aluminum foil and place in a freezer bag. Storing bread in the freezer will keep it fresh for about three months.

Take-out
Say your Thanksgiving dinner plans fell through, or you thought it easier and less stressful to get dinner through a to-go service: how long will it keep? Pizza and most take-out food will be good for three to four days if it's properly stored in an airtight container in the fridge. Rice will last for a little longer, for four to six days.

Chocolate
Keep chocolate tightly sealed in a cool, dry place—if done properly, it can last for about 16 months. Otherwise, a film of sugar or fat may rise to the surface, and while it's not typically harmful, it could impact the taste of your chocolate craving.

Condiments
Condiments are some of the longest-lasting items in the fridge. Dates printed on the bottles or jars are more "best by" dates instead of expiration dates, and the products are usually good to consume several months after those dates. Most mayo can last for two to three months after the "best by" date once it's been opened. Ketchup keeps flavor for about six months, and mustard and pickles should be good for up to a year. Salad dressings last from six to nine months and salsa should be good for about a month—however, consumers should actually finish salsa by the "best by" date on the bottle.