How Ketanji Brown Jackson will fit in on the Supreme Court 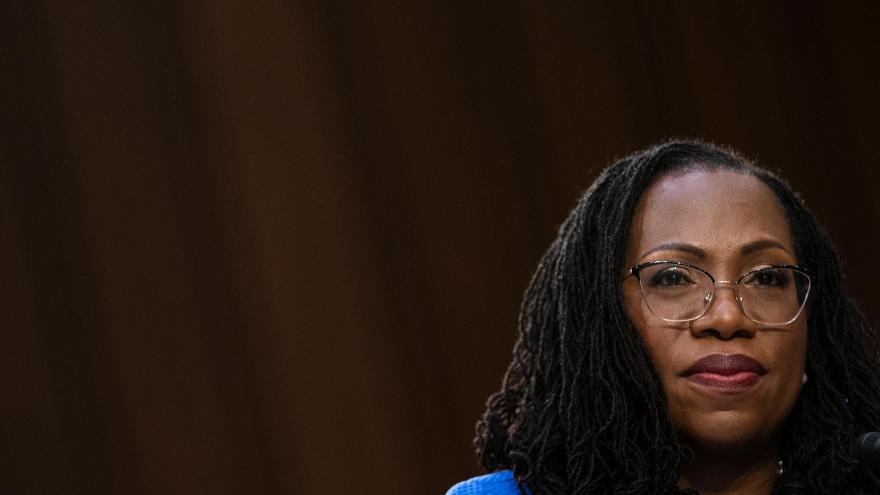 (CNN) -- Beyond the hyperbole and theatrics that have punctuated this week's Senate Judiciary Committee hearings, a portrait of Ketanji Brown Jackson as jurist has begun to emerge.

Like the justice she would succeed, Stephen Breyer, Jackson leaned on multi-part legal methods and data points. She emphasized regard for judicial precedent. She also took a page from the conservative side of the bench when she spoke of searching for the "original" meaning of the Constitution.

"I believe that the Constitution is fixed in its meaning," she told senators. "I believe that it's appropriate to look at the original intent, original public meaning of the words ... that's a limitation on my authority to import my own policy views."

Yet she added that sometimes the "words are not enough," that a judge must "look at them in the context of history" and "the circumstances that you're dealing with in comparison to what those words meant at the time that they were adopted."

She stressed restraint at every turn. That may have been directed to the conservatives in her audience. Still, as a lower court judge for nearly a decade (most of that time as a trial judge), Jackson has shown scant interest in challenging established legal rules.

"I am acutely aware that as a judge, in our system," she told senators on Tuesday, "I have limited power, and I am trying in every case to stay in my lane."

On Wednesday, ranking Judiciary Committee Republican Chuck Grassley of Iowa tried to pin Jackson down on her precise "judicial philosophy."

"The philosophy is my methodology," she said. "It is a philosophy that I have developed from practice. Unlike some judges who come to appellate work from academia and who have some overarching theory of the law, I approach cases from experience, from practice and consistent with my constitutional obligations. So my philosophy is one in which I look at cases impartially, consistent with my independence as a judicial officer."

In terms of personal style, Jackson demonstrated a serious and thoughtful demeanor as she sat alone at the desk and was subject to harsh and offensive questioning from some Republicans.

That could serve her well at the Supreme Court, which is currently marked by deep divisions and a tone of recrimination in some opinions. If confirmed, she would need all the persuasive ability she could muster. President Joe Biden's choice to succeed Breyer would be in the minority liberal wing of the high court. The court is split 6-3, conservative-liberal, and she would not change that basic balance.

Most strikingly, Jackson would become the first Black female justice in the court's 233-year history. She also breaks the mold of most past nominees with her diverse experience, having served as a federal public defender, a trial judge and a member of the US Sentencing Commission.

She has been on the ground floor of the nation's criminal justice system. She said she has issued 570 opinions. She acknowledged that she tended to write long, saying that "I want everybody to know exactly the arguments I've considered, the facts that I've reviewed."

Like nominees who have preceded her, she sidestepped questions from both sides of the aisle on difficult societal issues such as abortion and same-sex marriage.

California Democratic Sen. Dianne Feinstein referred to comments Justices Brett Kavanaugh and Amy Coney Barrett had made during their own confirmation hearings expressing regard for the 1973 Roe v. Wade and 1992 Planned Parenthood v. Casey decisions upholding the right to abortion. Jackson associated herself with those conservative justices.

"I do agree with both Justice Kavanaugh and Justice Barrett on this issue," Jackson said. "Roe and Casey are the settled law of the Supreme Court concerning the right to terminate a woman's pregnancy."

It is a very open question, however, whether Kavanaugh and Barrett will uphold abortion rights in a Mississippi case now at the high court and likely to be decided by June. Both voted in the majority last year to allow a Texas effective ban on abortion. It blatantly conflicts with Roe. The precedent Jackson acknowledged this week may simply not exist by the time she joins the court.

In separate lines of questioning, Jackson explained that adherence to precedent, the doctrine of stare decisis, helps build public confidence in the court and leads people to believe that judges base their decisions on law rather than individual views.

She detailed the traditional elements used to determine whether a precedent should be overturned. "There are many factors that the Supreme Court considers and not just whether they think a prior precedent is wrong," she said, noting that the justices also consider whether a previous ruling was "egregiously wrong" and the degree of public "reliance on that precedent."

Jackson maintained her composure through the toughest GOP questioning and speeches designed to win political points ahead of the midterm elections and possible presidential runs.

She was, overall, an impressive witness, even some of her critics acknowledged. Grassley observed on Tuesday that when he had arrived at home the previous night his wife had complimented Jackson's opening statement. Quipped the Iowa Republican, "She didn't have anything to say about my statement."

Some of GOP senators' most challenging inquires focused on Jackson's past statements and rulings related to child pornography cases. They said she was soft on such criminals.

Her rulings in this sensitive area of the law generally comport with decisions by many federal judges. Several of the statements raised from her days as vice chair of the US Sentencing Commission were taken out of context.

She told Missouri Republican Sen. Josh Hawley, who accused her of a pattern of leniency with child-pornography criminals: "As a mother, and a judge who has had to deal with these cases, I was thinking that nothing could be further from the truth."

As Jackson elaborated to Hawley, she pointed to her judicial process and the many factors she weighs to reconcile an individual case with the broader dictates of precedent and congressional statutes.

"These are some of the most difficult cases that a judge has to deal with because we're talking about pictures of sex abuse of children," she told Hawley on Tuesday, adding that under federal statute judges have to read and consider all the details of a case. "That statute doesn't say look only at the (sentencing) guidelines and stop. The statute doesn't say impose the highest possible penalty for this sickening and egregious crime. The statute says calculate the guidelines, but also look at various aspects of this offense, and impose a sentence that is, quote, sufficient, but not greater than necessary to promote the purposes of punishment."

Hawley continued on the topic through Wednesday, focusing on an 18-year-old offender who had received a three-month sentence. Jackson repeated that she looked to congressional enactments and "ruled in every case based on all of the relevant factors" to determine the sentence. Hawley persisted regarding the case, and in a moment of apparent frustration she said she had nothing more to add. When he asked her if she regretted the sentence, she said, "What I regret is that in a hearing about my qualifications to be a justice on the Supreme Court, we've spent a lot of time focusing on this small subset of my sentences."

In a separate line of questioning, she responded -- after a prolonged pause -- to politically charged queries from Texas Republican Sen. Ted Cruz, who had arrived with books assigned to students at Georgetown Day School, a Washington institution where Jackson sits on the board of trustees. He brought blown-up pictures of pages from one picture book titled, "Antiracist Baby," by Ibram X. Kendi.

"Do you agree with this book that is being taught (to) kids that babies are racist?" Cruz asked.

Jackson said she did not determine the curriculum and emphasized that the school was private. She said the critical race theory -- another GOP talking point this year -- to which Cruz referred does not influence her work as a jurist.

"I've never studied critical race theory and I've never used it. It doesn't come up in the work that I do as a judge," Jackson said.

Over two days of questioning, she regularly retreated to her three-step methodology for judging: "The first step is when I get a case, I ensure that I am proceeding from a position of neutrality," she explained, "clearing my mind of any preconceived notions about how the case might come out, setting aside any personal views." Then "once I have cleared the decks ... I am able to receive all of the appropriate inputs for the case. That is the parties' arguments." She said she evaluates the facts from various perspectives. Finally, "the third step is the interpretation and application of the law to the facts in the case."

Jackson also reflected Tuesday on her trailblazing career and the historic nature of her nomination to be the 116th justice. She referred to her faith and how it has helped her in hard times.

"I am here," she said, "standing on the shoulders of generations of Americans who never had anything close to this kind of opportunity."