How John Madden became the biggest name in video games 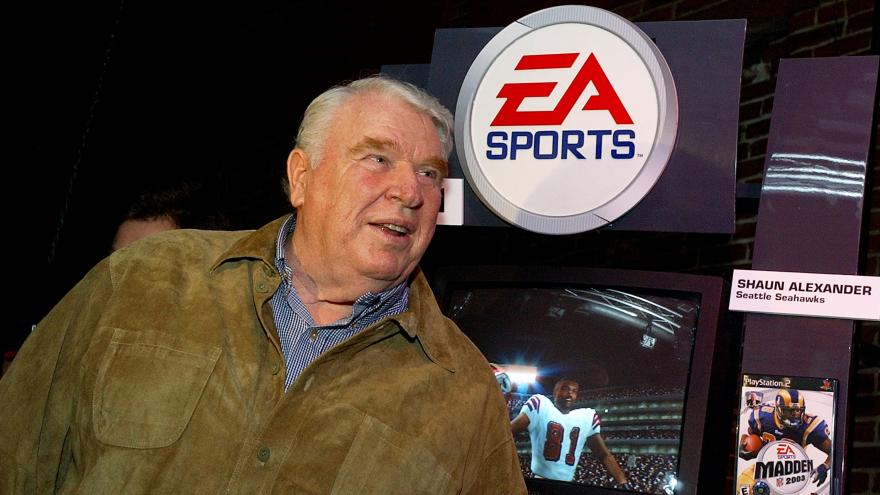 (CNN) -- John Madden, the former Hall of Fame NFL coach, has died. But his name lives on in one of the world's most popular video games.

The football coach and broadcaster has been the face of Madden NFL for more than three decades. The pro football video game continues to be a top-seller and is among the most successful franchises in history.

The video game got its start in 1988 when Electronic Arts Founder Trip Hawkins wanted a football video game. He wanted Joe Montana to be the face of it, but the former 49ers quarterback turned it down because of a previous endorsement deal with Atari, according to ESPN.

Originally released on the Apple II, the game play encountered issues because of its weak operating system that limited the amount of players present on the screen. After Madden signed on, the famous broadcaster immediately went to work, demanding the programmers change the 7-on-7 format to "real" 11-on-11 football.

"John Madden Football" was its original title for the first five years before the NFL added its name to it in 1993, allowing EA to use team names and logos. It was the first version to feature the slogan "EA Sports — It's in the game."

The video game eventually shifted away from featuring Madden's face on the cover in 2000 and instead focused on popular NFL players. Madden's voice was still featured prominently in the game.

Madden told Grantland in 2012 he didn't think about the legacy he left on the video game. "It's a way for people to learn the game and participate in the game at a pretty sophisticated level," Madden said.

The game's popularity grew, as did the number of consoles it was available for -- including a Sony PlayStation compatible version, which was released in 1996. By 2001, the game was on all major consoles such as the XBox and GameCube.In 2005, it became the exclusive video game to feature NFL property, beating out a similar ESPN game.

"Madden NFL" is a multi-billion dollar franchise for EA. The publisher has sold over 130 million copies of Madden games to date, generating at least $4 billion in total revenue, according to NPD. Barron's estimates that the Madden franchise's annual revenue for EA to is north of $600 million.

In 2020, the NFL and its players union have agreed to a five-year extension to continue to be featured on the games, according to Bleacher Report. The deal reportedly provides $1 billion to the NFL and $500 million to the players during this time, with another $500 million in marketing commitments.

In a statement released by EA, the company said they lost a "hero."

"John Madden was synonymous with the sport of football for more than 50 years. His knowledge of the game was second only to his love for it, and his appreciation for everyone that ever stepped on the gridiron. A humble champion, a willing teacher, and forever a coach," EA said in a statement posted on Twitter.