How Indian Americans are making Diwali their own 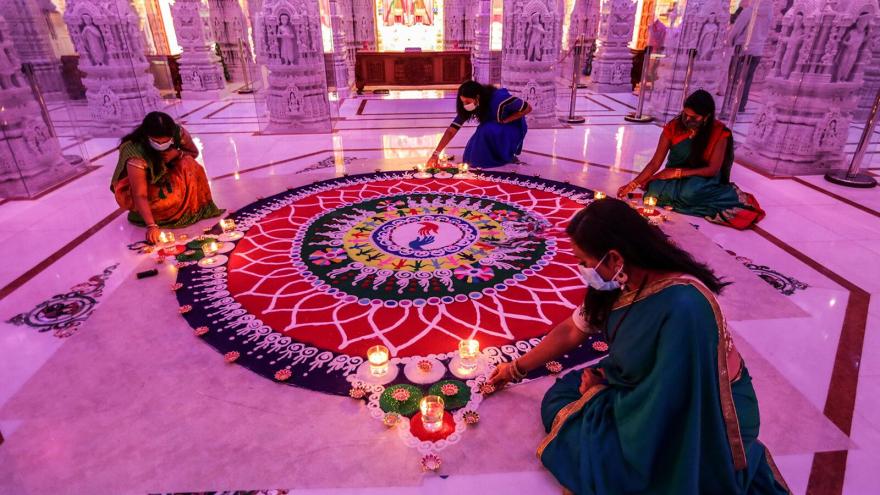 How Indian Americans are making Diwali their own. Women are seen tending to a rangoli during a Diwali celebration in Chino Hills, California, in 2020.

Her parents, though Hindu, weren't particularly observant, and while the family attended Diwali celebrations and pujas hosted by other relatives, they didn't necessarily do anything special at home.

Now that Patel has two kids of her own, the 38-year-old's outlook on the festival of lights has changed. She wants her children to feel connected to their Indian heritage, so she makes a concerted effort each year to make the holiday feel special for them. Patel and her family take part in common traditions such as performing ritual prayers, decorating the house with lights and drawing rangolis. But they've also adapted some Western traditions, like getting family photos taken for their Diwali cards and exchanging gifts at Diwali instead of Christmas.

"The idea is we're coming together as a community," said Patel, who lives in Dallas. "The fundamental part of Diwali that I want to pass on is that this is something special that our community celebrates, and I want that to be special for my children."

As Indian immigrants have crossed oceans and borders for new countries, the holidays and traditions they brought with them have both endured and evolved with the next generation. Diwali -- a festival with various meanings, histories and names depending on the region and religion observing it -- is no exception.

Here's a look at how some Indian Americans are making Diwali their own.

They fuse Indian and Western cultures

Diwali is both a religious and cultural holiday, celebrated by both the devout and secular.

The festival has significance for other faiths, too. Sikhs refer to the holiday as "Bandi Chhor Divas" (The Day of Liberation), marking the day that Guru Hargobind, their sixth guru, was freed from wrongful imprisonment along with the 52 Hindu kings who had been incarcerated with him. Jains recognize it as the day that Lord Mahavira, their last spiritual leader, attained physical death and achieved enlightenment. Some Buddhists observe by honoring the Emperor Ashoka's embrace of Buddhism.

As she's gotten older, Patel finds herself navigating how to keep those traditions alive while embracing both her Indian roots and American upbringing. Though the ways that she observes the festival haven't changed all that much, she says she's trying to engage more fully with the significance behind the rituals.

"While we still do a lot of the same things, I kind of dig for that deeper meaning and understanding so that I feel more comfortable carrying these traditions forward," she said.

Every year, Patel gathers with her family for a puja at her grandfather's house, followed by a night of feasting and fireworks. But before the main event, she and her husband make it a point to perform prayers at their own home.

"That was something that was important to my husband and I, to make sure that we're acknowledging Diwali within our four walls as well," she said.

Patel has also found ways to share Diwali with others in her community. She puts together gift baskets to distribute to close friends and neighbors and operates a small home decor business with her husband that includes Diwali candles, prayer frames and holiday signs among its inventory.

That fusion of Indian and American cultures is something that Sahej Singh also considers.

When Singh was growing up in Colorado Springs, she said the Indian diaspora there celebrated Diwali by putting on an annual cultural show featuring skits and dances. It was an event she looked forward to every year -- Singh remembers spending weekends practicing dances with her friends and how non-Indian classmates and teachers were invited to partake in the fun, too.

"It was a really big deal for us where we grew up," she said. "That's something that [the Indian community] really tried to make their own."

These days, Diwali celebrations for Singh are more laid-back. The 25-year-old lives in Tampa, Florida, with her family and plans this year to bake a Parle-G cheesecake, have friends over to play cards and carrom and of course, blast music and dance. Being Sikh, she says her family will likely attend services at the Gurdwara as well.

"You have those traditional things that maybe people in India do but you're also adding your own traditions being a second generation American here," Singh added.

They created the resources they needed

Growing up in India, Akruti Babaria didn't have to think much about Diwali.

There, the traditions just happened -- she and her sisters would spend hours the night before the holiday creating elaborate rangolis in their home and she didn't have to look far to find someone who could explain the meanings behind all the rituals.

When Babaria moved to the US with her parents in 2000 at 16, their traditions evolved with them. Creating rangolis was near impossible in the apartments they lived in, so they defaulted to makeshift forms. And after her son was born a few years ago, she realized she didn't have all the answers to the questions he might ask about their culture.

"We started to feel a bit of distance from our traditions and practices in the sense of: How do we pass it on to our child, who's going to grow up in America, who is Indian American, who had parents who are immigrants?" Babaria, who lives in Buffalo, New York, said. "We wanted him to grow up with self confidence in his identity and his roots."

Babaria searched for resources that could help her share her heritage with her son, but found few options. She knew that if she felt that void, surely other parents did, too. She eventually left her job as a project manager for a health care company to launch Kulture Khazana -- the company sells Indian books centered around holidays and Hindu theology, holiday boxes, puzzles and toys.

Last year, Babaria decided to recreate for children what she missed most about Diwali celebrations in India: Rangoli. She developed a giant, circular floor puzzle that fused fun patterns with the sacred geometry of the mandala, allowing kids to experience the tradition without having to worry about the mess that using colored rice or sand might bring. Her other offerings include children's versions of the Hindu epics "Mahabharata" and "Ramayana" and a puja thali kit for little hands.

"Some of the biggest challenges that we face are we're all very busy parents," Babaria said. "Unless the resources are created for us, it is very hard."

Though the author comes from a Parsi family and doesn't have a religious connection to the holiday, she was raised in the multicultural city of Mumbai, where Diwali celebrations were ubiquitous. She remembers her father distributing sweets to community members and business associates and buying fireworks for neighborhood kids to set off.

But when she moved to the US at 21, she found Diwali wasn't anywhere near the spectacle it was in India.

"I had always thought that it was so unfortunate that here's this huge holiday celebrated by close to a billion people in different corners of the world," Umrigar said. "Yet most Americans are totally unfamiliar with it."

So the children's book "Binny's Diwali" was born.

Rather than retelling the history of Diwali, Umrigar said she wanted to make the book relevant for kids today. The story centers on a young girl named Binny, who is excited to talk to her classmates about Diwali during show and tell but struggles to find the words. Drawing on inspiration from the meaning of Diwali, Binny's courage eventually triumphs over her fears and she manages to share with her class what the festival of lights is all about.

Umrigar said she's received notes of gratitude after "Binny's Diwali" released, with readers feeling a sense of pride and collective ownership that a book like hers exists.

"Of course, I would hope that my book is simply a jumping off point, right? That it's just the start of a conversation and not the end of a conversation," she added. "Then it comes to individual families talking about their own traditions, because everybody does every holiday a little bit differently."

They have mixed feelings about it

Diwali for Sangeetha Kowsik is just like any other day.

Kowsik, a Hindu chaplain and spiritual adviser at New York University and Columbia University, says she generally performs Lakshmi and Ganesh puja for her students during the festival and tries to ensure they understand its spiritual significance. But since she prays to the deities Lakshmi and Ganesh every day, Diwali doesn't feel as important to her.

This year, Diwali also happens to coincide with another Hindu festival called Skanda Sashti, which for her Tamil family carries greater significance than Diwali.

Kowsik says she feels that Diwali has become too commercialized, and though she's glad to see it get wider acknowledgment in Western culture, she fears its meaning is overlooked.

"I'm happy that it gets recognition but the spiritual aspect of it has been lost," she said.

Sailaja Darisipudi has a conflicted relationship with Diwali as well.

Her family is Hindu and from the southern Indian state of Andhra Pradesh. And while they observed Diwali by lighting candles and firecrackers each year, it wasn't as significant to them as festivals such as Ganesh Puja or Sankranti.

Born in New Jersey, Darisipudi found herself navigating a confusing internal struggle growing up. At a time when she felt starved for South Asian representation, any pop culture reference to Diwali felt like a huge win. And because she also felt Diwali was the only Indian holiday people knew, she played up its importance in her life.

"Growing up, I felt like I had to act like Diwali was a bigger deal to us than it really was," she said.

Darisipudi says she still celebrates Diwali mostly the same way she did during her childhood, but now debating her family about why they celebrate the holiday has become tradition, too. After those conversations, they get dressed up and light firecrackers in their driveway.

They hope to pass it on to their kids

For many Indian Americans, including Radha Patel, the hope is that their children will have enough of a connection to Diwali that they'll continue observing it when they get older.

"I've tried to incorporate that much more consistently in their lives so that when they get to high school or later, they've got that fundamental that I feel like I was missing," Patel said. "Then they can evolve and grow in their own traditions and practices moving forward in a way that makes sense to them."