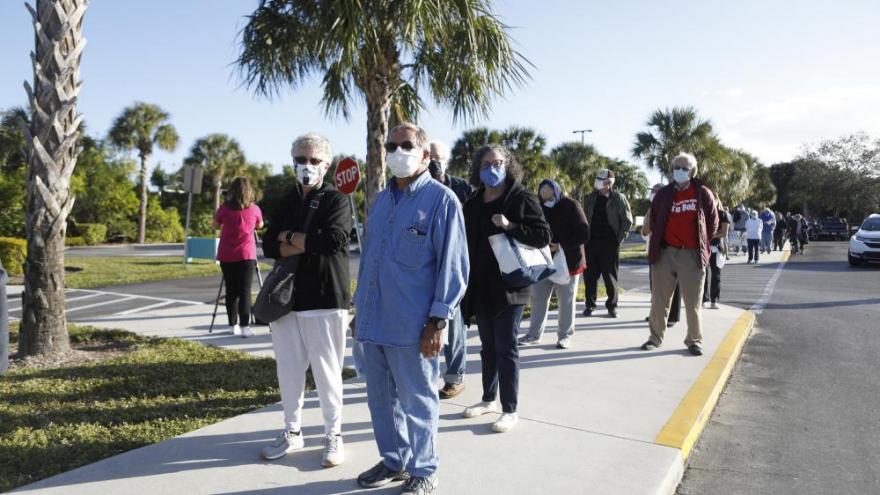 Seniors wait in line outside a library in Fort Myers last week, hoping to get one of 800 doses of coronavirus vaccine available at the site.

(CNN) -- Wendy Walsh has gone from frustrated to angry about the rollout of the Covid-19 vaccine in Florida. She wants her mom protected, fearing that if the 92-year-old gets the virus, it's essentially a death sentence.

"It's like a ticking time bomb -- you're just waiting," Walsh told CNN.

Her mom, Marie Schreiner, lives in an assisted living facility in the Tampa area that recently went into lockdown because of a Covid-19 case. Walsh says she has made hundreds of phone calls to government agencies seeking information about how to get the vaccine but has gotten nowhere.

Like thousands of Floridians desperate for the lifesaving shot for themselves or an elderly loved one, she is left wondering who is in charge and why some of the most vulnerable are still waiting. Florida has recorded more than 1.4 million cases of coronavirus and more than 22,000 deaths since the pandemic began, according to data from Johns Hopkins University. State data shows about 83% of deaths were of people 65 or older.

The Covid-19 vaccine distribution in Florida started out smoothly four weeks ago, with frontline healthcare workers getting the first shots. A week later, seniors living in long-term care facilities began getting the vaccine. That's when Walsh thought her mom would get one.

As doses of vaccines flowed into Florida by the tens of thousands, Gov. Ron DeSantis signed an executive order on distribution. Instead of following guidelines from the Centers for Disease Control and Prevention to prioritize essential workers and those over 75, he offered the vaccine to all the state's 4.5 million seniors 65 and older.

That sparked overwhelming demand. Thousands of seniors across the state waited in lines, some slept overnight in their cars or on lawn chairs to get inoculated at vaccination centers. Others maneuvered through jammed phone lines and crashed websites to get appointments. And some would just show up, hoping to get lucky and get a shot. But tens of thousands of others -- perhaps less healthy, perhaps with fewer resources -- were left out.

When CNN asked DeSantis what went wrong with the rollout of the vaccine in his state, he interrupted and said the demand was high. After a contentious exchange, during which he told CNN to investigate why seniors camped out overnight, he blamed local hospitals and health officials.

"These guys [local hospitals] are much more competent to be able to deliver healthcare services than a state government could ever be," he said.

But Broward County Mayor Steve Geller says it is the state government that is still in charge, with a governor giving unrealistic expectations.

While he's getting angry emails and phone calls from constituents blaming him for the mess, the vaccines are being delivered to what is called the Florida Department of Health in Broward. That department doesn't report to him but to the state, and DeSantis.

"He inadvertently appears to have given seniors the inaccurate belief that they can register immediately for the vaccine, and that they can all receive vaccinations now," Geller said of the governor.

Joyce Fish, an 82-year-old with cancer, is among those who want the vaccine now. She is battling multiple myeloma. Once vaccinated, she and her husband Jack want to visit with their new great grandchild. But they are frustrated by all the red tape and delays.

"The state gave doses to specific hospitals which themselves produced distribution plans. That was not an efficient or effective way to do the distribution," she said in an email.

She said the state needed to be involved so the size of the population of targeted and at-risk people in each county would be known, facilitating the delivery of vaccines there. DeSantis continues to say the state should be hands-off.

That does create opportunities for some seniors.

Joy Dzieginski waited in line for about 14 hours outside Lakes Regional Library in Fort Myers.

"This is our only hope of getting back to normal so we are going for it," Dzieginski told CNN.

She stayed warm wrapped in a blanket, and likened the experience to pulling an all-nighter before Black Friday shopping for Christmas presents.

But others are in limbo -- not sick enough for a skilled nursing facility, not fit enough to sit in line. And the lack of information about when the vaccine might be available is wearing their patience thin.

Walsh, for example, who is trying to help her 92-year-old mother, said she would have sat in line for her but she thought that she and other vulnerable residents of assisted living facilities would be a priority for vaccination after medics and nursing home residents.

"If I was told, 'Why don't you take your mom out and get her on line with you to get a shot'? I would have done that," she told CNN. "But I was under the assumption that these facilities were first."

Walsh says she's called DeSantis' office asking why seniors like her mother are still waiting, while those with less exposure have been inoculated. But she says she never got an answer.

CNN tried asking DeSantis that same question during his latest press conference in Miami. He did not take the question and walked away.