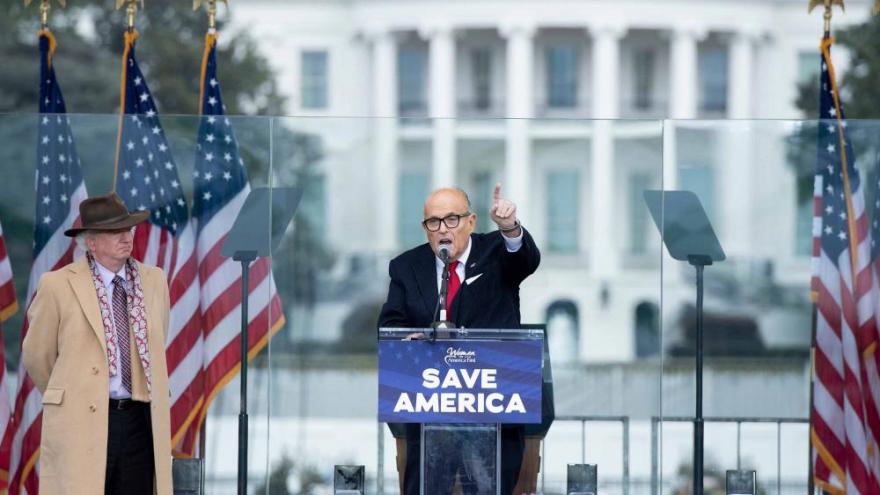 Rudy Giuliani speaks to supporters near the White House on January 6, in Washington, DC.

(CNN) -- After being under investigation by federal prosecutors for more than two years, Rudy Giuliani got a glimpse late last month of the possible charge authorities are eyeing for him: a breach of foreign lobbying laws connected to his work in Ukraine.

The potential crime, detailed on search warrants that federal agents executed on his Manhattan home and office, has often been dismissed by critics as a paperwork violation.

But legal experts say that particularly in Giuliani's case, a charge under the Foreign Agents Registration Act, or FARA, which requires that individuals disclose with the Department of Justice lobbying activities on behalf of foreign governments or officials, should be regarded as a serious infraction, one with geopolitical implications.

In recent years, it has been used to go after other allies of former President Donald Trump, including Michael Flynn and Paul Manafort.

"A FARA violation is much more than a failure to register with DOJ," said Daniel S. Goldman, a former federal prosecutor who was director of investigations for the House Intelligence Committee during the first impeachment of Trump, an inquiry that probed Giuliani's efforts in Ukraine.

In Giuliani's case, Goldman said, the set of allegations "goes to the heart of our national security and our diplomatic and foreign relations."

Prosecutors are examining whether Giuliani may have been lobbying for Ukrainian officials when he sought the ouster of the then-US Ambassador, Marie Yovanovitch, and urged Ukraine to investigate Trump's political rival, then-Democratic presidential candidate Joe Biden and his son Hunter, while pursuing those outcomes as Trump's attorney.

Giuliani has not been charged with a crime. He has said his activities in Ukraine were done in his capacity as Trump's lawyer and that he "never represented a Ukrainian national or official before the United States government."

And while prosecutors appear to have enough evidence to have obtained search warrants, FARA investigations sometimes don't result in charges.

"There has historically been reluctance [to bring such cases] because it is sometimes a challenging charge," said Ryan Fayhee, a former national security prosecutor.

It is also possible that prosecutors could pursue other charges against Giuliani. They have repeatedly stressed that the grand jury investigation is ongoing, and on Thursday they disclosed in a court filing opposing Giuliani's request to unseal affidavits supporting an earlier search of his iCloud account that "[a]lthough there has been public reporting about the existence of this investigation, much of the information set forth in the affidavits is not publicly known."

They also noted that the affidavits include "discussion of significant quantities of materials that have not been publicly revealed and were obtained pursuant to search warrants and subpoenas" as well as "information provided by individuals to the Government pursuant to subpoena or otherwise."

In executing the search warrants in April, authorities seized 18 electronic devices, the Justice Department said, and they took the devices following a period during which Giuliani and Trump made efforts to overturn the results of the 2020 presidential election. In order to use that material as evidence, however, prosecutors would need to obtain additional search warrants specific to other possible crimes.

Months ago, prosecutors pursued inquiries related to his work in other countries, CNN has reported, but the probe is now focused primarily on his Ukraine-linked activities.

However, even if Giuliani pushed Yovanovitch's exit and pressured the Ukrainian president to announce an investigation into the Bidens to advance Trump's interests, he would still be vulnerable to a FARA charge if he had also sought those results on behalf of a Ukrainian official, Goldman said.

"The Yovanovitch stuff is pretty clear cut, because that was a specific action that Giuliani was promoting and trying to influence the US government to do," he said. "So if you can show that he was working on behalf of a specific business partner in Ukraine or [former Prosecutor General of Ukraine Viktor] Shokin, even if he was doing it for what he perceived to be Trump's political benefit, it doesn't have to be for one reason."

Used to prosecute other Trump allies

Though FARA cases had been rare in recent decades, the Justice Department made a significant push to prioritize them in the past few years.

In 2017, former Trump national security adviser Michael Flynn pleaded guilty to lying to the FBI about conversations with Russia's ambassador and admitted to making false statements in foreign lobbying filings about his work for Turkey. (Trump subsequently pardoned Flynn.)

And in March 2019, the DOJ decided to accelerate its pursuit of foreign influence operations, in part by appointing a prosecutor who worked on special counsel Robert Mueller's team to lead a revamped unit intended to crack down on unregistered foreign agents.

But it can be difficult to make charges stick

FARA prosecutions haven't always worked in the government's favor, however.

In 2019, for instance, former Barack Obama White House counsel Greg Craig was indicted and charged with two crimes: making false statements to the FARA unit and concealing material information in connection with work he performed for Ukraine.

During the investigative phase, Craig's case had bounced between several prosecutors' offices, including the Manhattan US Attorney's office, where prosecutors declined to bring charges, determining that they didn't have sufficient evidence.

After Craig was charged months later by the US Attorney's office in Washington, DC, the case fell apart. First, prior to the trial, a judge threw out the false statement charge against Craig. Then, he was acquitted at trial.