How feasible is it for businesses to require proof of vaccination? Experts are split 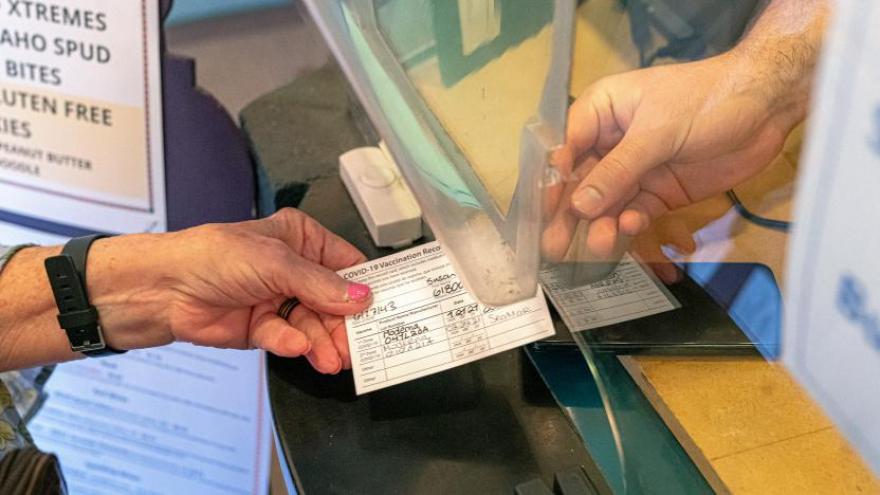 More states are easing coronavirus restrictions as per the latest Centers for Disease Control and Prevention guidance, meaning vaccinated people are now permitted to go maskless in many settings.

(CNN) -- After a year of wearing masks, physical distancing and only small outdoor gatherings, a world of possibilities is finally beginning to open up for the vaccinated.

More states are easing coronavirus restrictions as per the latest Centers for Disease Control and Prevention guidance, meaning vaccinated people are now permitted to go maskless in many settings.

Because loosening those rules would otherwise largely hinge on the honor system, though, some businesses and organizations have announced that they'll require proof of vaccination for entry -- either because they want to ensure a safer environment or because their state or local government mandates it.

It's an interim solution that allows vaccinated people to regain a sense of normalcy, while establishments ramp up operations after an economically devastating year. But requiring proof of vaccination also raises challenges around logistics and enforcement, as well as concerns about forgery and privacy.

Here's where some experts and business owners stand.

For larger events, the details are still unclear

Music festivals are returning, performance venues are opening and sports stadiums are filling up -- and a number of them will be checking vaccination status.

Among the events back this summer is Lollapalooza, with Chicago Mayor Lori Lightfoot announcing earlier this week that festivalgoers would have to provide proof of vaccination or a negative Covid-19 test taken within 24 hours of attending each day.

New York's Radio City Music Hall is also planning to reopen at full capacity next month for the final night of the Tribeca Film Festival -- but only for vaccinated people, Gov. Andrew Cuomo said this week.

Both reopening announcements, made by public officials, appeared to function in part as incentives for residents to get their shots.

"The whole point of our change is to say to people, 'There are benefits to being vaccinated,'" Cuomo said at a news conference on Monday.

It's still unclear, though, exactly how both events are planning to implement those protocols.

Lollapalooza, which regularly draws hundreds of thousands of attendees, notes on its website that details on the entry process will be available in early July, and organizers did not respond to a request for comment.

A spokesperson for Madison Square Garden Entertainment, which operates Radio City Music Hall, referred questions about enforcing the vaccination requirement to the Tribeca Film Festival. The festival did not respond to a request for comment.

Businesses and establishments in New York, at least, may have an easier time of checking for vaccine status than other parts of the country -- the state's voluntary Excelsior Pass app presents digital proof of the Covid-19 vaccination or negative test results and has already been used at Madison Square Garden, Barclays Center and Yankee Stadium.

Still, only people who have been vaccinated or tested in New York can get a pass through the app -- though the state notes that individuals can present alternate forms of vaccination or testing, including paper forms.

Some businesses are doing so out of safety

For some businesses, allowing only vaccinated patrons inside is a means of ensuring they are keeping their communities as safe as possible.

The Bayou, an independently owned bar in Salt Lake City, Utah, has been closed for dine-in service throughout the pandemic. Given the Covid-19 case numbers in Utah, the owners simply didn't feel that they could responsibly operate without a customer or an employee potentially getting sick.

"A lot of us know intuitively that masks in restaurants are fairly comical and mostly theater," co-owner Mark Alston told CNN last week. "Because as soon as you sit down at the table, you have to take off your mask to eat and drink."

Now that all of its staff has been fully vaccinated and the shots are more widely available, The Bayou is finally opening up for indoor service -- but only for the vaccinated.

Nancy Kass, a professor of bioethics and public health at Johns Hopkins University, says she understands why businesses would want to require patrons to prove they've been vaccinated. Managers need to be able to reassure both their employees and customers that they're providing a safe and low-risk environment.

But businesses may also need to allow for accommodations in certain instances, she added.

"What I think is challenging and important is whether these venues will allow an alternative mitigation strategy if someone doesn't want to be vaccinated or is unable to provide proof of vaccination," Kass said.

The Bayou is trying to make the process as easy as possible for customers -- a photo of a vaccination card on a phone, an email from a health department and other similar documentation all suffice, Alston said.

Those who aren't vaccinated are welcome to order curbside takeout, and the bar notes on its website that it plans to have a designated day and time where people who are unvaccinated due to a disability or religious objection can dine in.

Still, it's a decision that has prompted backlash for the establishment, Alston said. But the bar is standing firm, even though it may lose business.

Others see enforcement as a burden

Despite ongoing concerns about safety, other businesses and organizations don't see themselves implementing a proof of vaccination requirement -- largely because they don't have the resources.

Xiomara Peña, vice president of engagement for the national organization Small Business Majority, said such policies would be challenging for many businesses in their network who don't already have a similar infrastructure in place. So for the time being, many are opting to keep previous protocols in place.

"We're also hearing some concerns from businesses that are saying they will continue to require masks and social distancing because it's not easy or practical for them to determine who's been vaccinated or not," Peña said.

Other Small Business Majority members have expressed concerns about how a vaccine requirement could unfairly burden those in communities where vaccine access has been more limited, she added.

Audrey Fix Schaefer, communications director for the National Independent Venues Association, said many in the music industry breathed a sigh of relief when they heard the federal government wouldn't mandate Covid-19 vaccine verification.

"We were grateful to see that because we know that it's going to be incredibly hard to administer," Schaefer said. "Different companies and different businesses are going to choose to do that. Others are not."

Those who oppose requiring proof of vaccination sometimes argue that it constitutes a violation of the Health Insurance Portability and Accountability Act -- known as HIPAA -- which protects sensitive health information from being disclosed without a patient's consent or knowledge.

Legal expert Mark Hall, professor of social sciences and health policy at the Wake Forest School of Medicine, says that's not the case.

Customers are not obligated to share their vaccination status with a business who asks for it. Similarly, businesses are within their rights to refuse service to customers who won't abide by their protocols.

An added wrinkle to all of this is that some states -- among them Arizona, Florida and Texas -- have issued executive orders that would prohibit "vaccine passports," creating confusion for businesses on whether they are allowed to ask customers for vaccine verification.

Hall says it's not clear that governors have the authority to restrict what businesses can require of their customers, and that such executive orders could be subject to legal challenges. But it could take time for that to play out.

"Until the issue gets litigated, the law is the law," Hall said.

Experts are mixed on whether requiring vaccine proof is feasible

Businesses and organizations are in the midst of a messy, interim period, says Dr. Georges Benjamin, executive director of the American Public Health Association. And figuring out how to implement policies that apply to vaccinated and unvaccinated people can be challenging.

But from a public health standpoint, Benjamin says he doesn't view proof of vaccinations as the most efficient solution.

The flimsy paper cards that typically signify that a person has been vaccinated against Covid-19 are easy to forge, Benjamin noted. And those checking vaccination status at the door often have no way of verifying that the proof being presented is real.

Hall acknowledges the difficulties of verifying a person's vaccination status, but said in the absence of a formal database or system, businesses and organizations will just have to do the best they can.

"If the alternative to showing proof is just taking people's word for it, then I think asking for proof that might be forged is better than not asking for any proof," he said.

Meanwhile, Benjamin says a cheaper and easier method of keeping patrons safe is to continue to require masks for everybody. But if it's a bar or restaurant where the mask will eventually have to come off anyway, that system isn't the most logically sound either.

Benjamin encourages businesses to think critically about who their safety protocols are designed to protect, whether they'll be able to enforce them and whether the rules are accomplishing their objective.

He says he's not so concerned about people who might be unmasking despite being unvaccinated -- those people were likely already doing so, and people who are fully vaccinated are protected from the risk of being infected by an unvaccinated individual.

"People are getting really nervous about a situation that existed before we took the mask off the vaccinated, and I would like to see us focus on getting people vaccinated," Benjamin said.