How easy (or hard) is it to confuse a gun for a Taser? 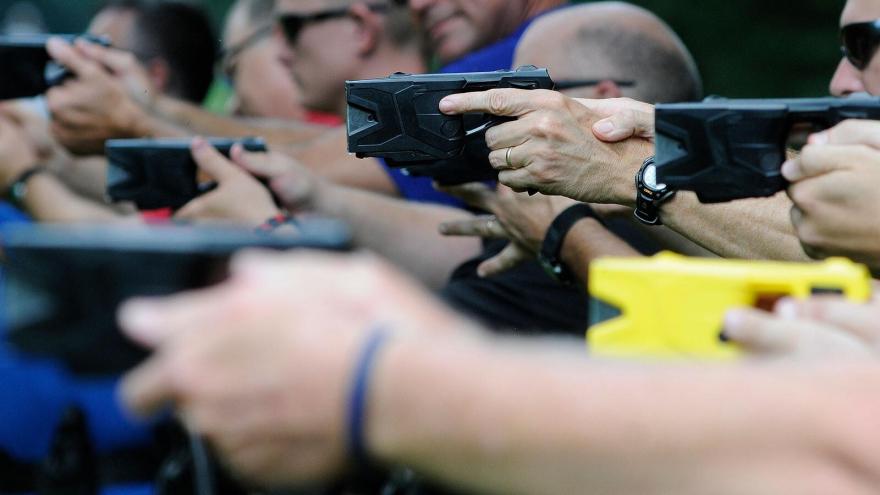 Fatal mix-ups involving Tasers and guns are very rare. Law enforcement and park rangers are shown using a variety of Tasers during training in 2014.

(CNN) -- On the surface, the mix-up seems unfathomable: An officer intends to deploy a Taser but instead fires a handgun and kills someone.

But that's apparently what happened Sunday in Brooklyn Center, Minnesota, when an officer shouted "Taser! Taser! Taser!" before pulling the trigger of her gun and killing 20-year-old Daunte Wright, the police chief said.

This kind of tragic killing has happened before:

-- In 2015, volunteer sheriff's deputy Robert Bates said he accidentally fired his handgun instead of his Taser when he killed Eric Harris, an unarmed suspect who was already held to the ground by deputies.

"Oh! I shot him. I'm sorry," Bates said in a video of the shooting in Tulsa, Oklahoma. Bates was convicted of second-degree manslaughter and sentenced to four years in prison.

-- In 2009, Bay Area Rapid Transit police officer Johannes Mehserle fired his gun instead of his Taser, killing 22-year-old Oscar Grant in Oakland, California. Mehserle was sentenced to two years in prison for involuntary manslaughter, but was released early due to good conduct.

It's not clear what will happen to the Minnesota officer, who has been put on administrative leave following the "accidental discharge that resulted in the tragic death of Mr. Wright," Brooklyn Center Police Chief Tim Gannon said.

So how easy -- or hard -- is it to accidentally draw and fire a handgun instead of a Taser? Here are some factors to consider:

The placement is important

Law enforcement experts say the gun should be holstered on the officer's dominant side of the body, and the Taser should be placed on the nondominant side.

"The reason you carry the Taser on the opposite side of your handgun is to avoid that kind of thing (the Minnesota shooting) from happening," CNN law enforcement analyst Charles Ramsey said Monday.

"We train with our handguns on our dominant side and our Taser on our weak side," the police chief said.

It was not immediately clear whether the officer who killed Wright had the devices on the wrong sides, or if she used the wrong hand to grab a device.

Tasers are designed to be distinguishable from guns

There are several key differences that make Tasers look and feel different from guns.

Tasers are typically lighter and have a different grip and feel, former Taser vice president Steve Tuttle said in 2015.

And when you take the safety off on a Taser, an LED control panel lights up.

Tasers have a different type of holster than a gun, and many have at least some bright yellow on the device.

'It should not have happened'

While independent investigators look into the fatal shooting in Minnesota -- and whether the officer should be charged -- Gannon offered his "deepest sympathies" to Wright's family.

"There's nothing I can say to lessen the pain that Mr. Wright's family, friends, for the that feeling of loss that they must have," the chief said. "That pain is shared by the community and also all those involved in the incident."

Ramsey said bodycam footage shows there was no need for the use of deadly force. And while fatal mix-ups involving Tasers and guns are very rare, even one is too many.

"This is, without question, a tragedy," Ramsey said. "It should not have happened."