'How do you shoot my baby?': A first responder arrived at Robb Elementary to learn his 10-year-old daughter had been killed 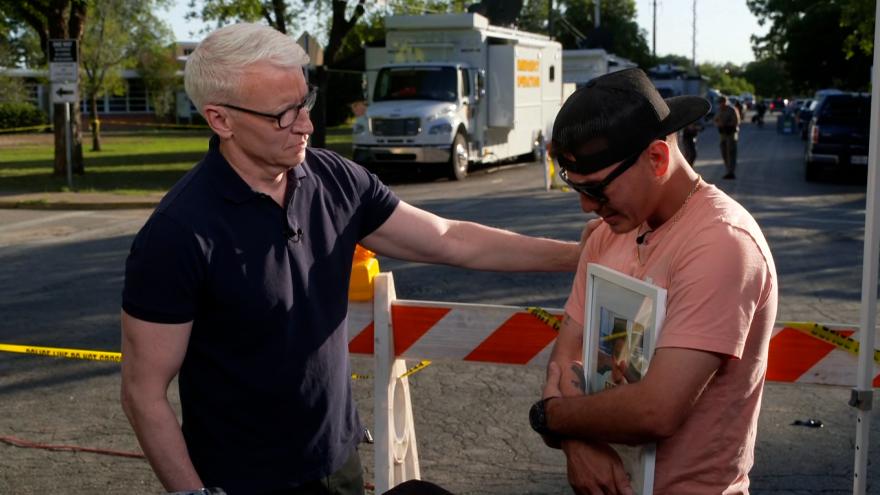 "One little girl was just covered in blood head to toe. I thought she was injured, I asked her what was wrong. She said she was OK -- she was hysterical, saying that they shot her best friend, that they killed her best friend, she was not breathing," Garza told CNN's Anderson Cooper on Wednesday.

"I asked the little girl the name, and ... she said Amerie," he said, dropping his head and weeping.

That's how Garza found out that his daughter, Amerie Jo Garza, 10, was fatally shot at the Uvalde, Texas, elementary school -- the deadliest US school shooting in almost a decade. A gunman barricaded himself inside a fourth-grade classroom, killing 19 children and two teachers.

Garza was fearful as he rushed to the school but didn't know his daughter's whereabouts.

Amerie had turned 10 about two weeks before the attack. Her family celebrated her birthday with a dinner and gave her a cell phone -- her first. Her classmates told Garza that she was trying to call 911 on the phone during the attack.

"She's been wanting a phone for so long and we finally got it for her. She was just trying to call authorities, and I guess he just shot her," Garza said, cradling a photo of Amerie taken when she made honor roll at school.

Garza recounted his agonizing story between sobs as Cooper listened and put his left hand on Garza's shoulder.

"How do you look at this girl and just shoot her?" Garza continued, hugging the photo. "Oh my baby. How do you shoot my baby?"

Her baby brother keeps asking where she is

Garza described his daughter as a sweet, creative child who listened to her parents and never got in trouble in school.

Amerie was scared of strangers -- and would hurry to lock the door when her father stepped out to pump gas.

"This is literally her worst fear," Garza said.

She was a big sister to a 3-year-old brother who's been asking for her every morning, but does not fully understand why he'll never see her again.

"We've informed him that his sister is now with God. And that she will no longer be with us," Garza said. "He just cried ... he's 3 years old. This is emotional for him to even process."

Hours after the shooting, Garza posted a Facebook message for his little girl.

"My little love is now flying high with the angels above. Please don't take a second for granted. Hug your family. Tell them you love them," he wrote. "I love you Amerie Jo. Watch over your baby brother for me."

Garza wants people to remember his daughter as a sweet kid

Tuesday's theme was "Footloose and Fancy," and teachers encouraged the children to come dressed in nice outfits and show off fun footwear.

But what began as a day of fun abruptly turned into terrifying carnage.

The 18-year-old shooter was in a standoff with authorities for about a half hour before officers breached the classroom and killed him, said US Rep. Tony Gonzales, whose district includes Uvalde.

It was the deadliest shooting at a K-12 school in the United States since 2012, when 26 children and adults were killed at Sandy Hook Elementary School in Newton, Connecticut.

Garza said he wants people to remember Amerie as a good kid who tried to do the right thing to the end.

"She was just trying to call the cops, that's all," he said. "I just want people to know she died trying to save her classmates. She just wanted to save everyone."