How dangerous was Russia's attack at the Zaporizhzhia nuclear power plant? 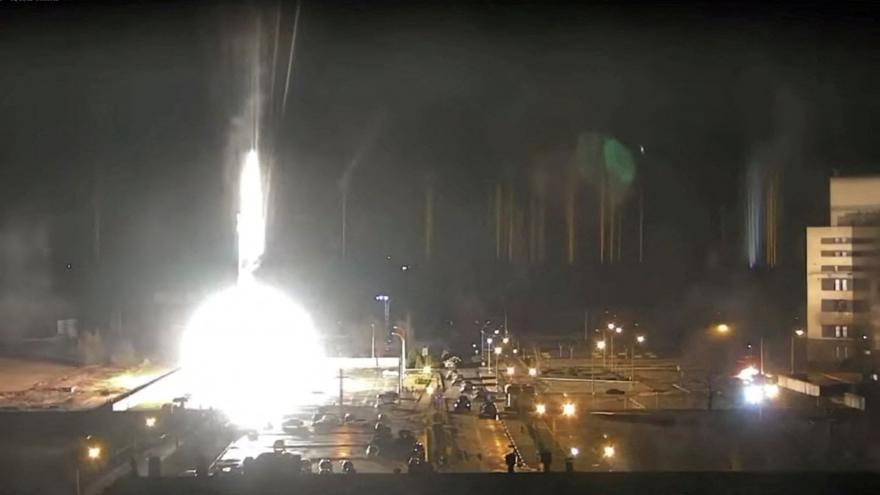 Those concerns were quickly downplayed by experts, who warned against comparisons with the plant at Chernobyl, where the world's worst nuclear disaster occurred in 1986.

Modern plants are significantly safer than older ones like Chernobyl, they said. But analysts nonetheless expressed horror that Russia's violent invasion of Ukraine has spilled into nuclear facilities, a development with few recent parallels.

And the operator and regulator of the site have communicated that the situation on the ground is "extremely tense and challenging," according to the International Atomic Energy Agency (IAEA).

"No country besides Russia has ever fired upon an atomic power plant's reactors. The first time, the first time in history," Ukrainian President Volodymyr Zelensky said in a Facebook post.

The IAEA called for fighting around the facility to end, and world leaders were swift in their criticism of Russia's move.

Radioactive material was not released from the plant, but it was a "close call," Rafael Grossi, the IAEA director-general, told CNN's Christiane Amanpour Friday.

Following the Russian attack, "there was great alarm if the physical integrity of the nuclear power installation had been compromised, with the ... possible risk that that entails," Grossi said.

Grossi had earlier told reporters that what happens next at Zaporizhzhia is "a situation that is very difficult to sustain, very fragile" while there is an active military operation and Russian forces in control. "This is unprecedented," he said. "Completely uncharted waters."

What happened at the Zaporizhzhia nuclear power plant?

Reports of an attack on the facility emerged early Friday morning, with video of the scene showing bursts of gunfire apparently directed at the Zaporizhzhia plant before dawn.

A large number of Russian tanks and infantry "broke through the block-post" to Enerhodar, a few kilometers from the Zaporizhzhia power plant, according to Grossi.

A Russian projectile then hit a building within the site of the plant, causing a localized fire, but none of the reactors were nearby and they were unaffected, the IAEA chief said.

In a Facebook post early Friday, Zelensky accused Russian troops of committing a "terror attack" by intentionally firing at the power plant -- potentially risking the lives of millions.

"Russian tanks, equipped with thermal imagery, are shooting at the atomic blocks. They know what they are shooting at. They've been preparing for this (attack)," Zelensky said in the post, adding "our guys are keeping the atomic power station secure."

The power plant's six reactors remain intact, though the compartment auxiliary buildings for reactor unit 1 had been damaged, the SNRI said in its statement. Four of the remaining units are being cooled down while one unit is providing power, the statement said.

Separately, Ukraine's nuclear power operator, Energoatom, said the "administrative building and the checkpoint at the station are under occupiers' control." It said staff are working on the power units to ensure stable operation.

How dangerous was the attack?

Ukrainian officials quickly sounded the alarm about the potential implications of the attack. Foreign Minister Dmytro Kuleba said that "if (the plant) blows up, it will be 10 times larger than Chernobyl," and Zelensky said that such an incident would mean "the end of Europe."

But experts were quick to stress that they did not believe a reactor could blow up, pointing out fundamental differences between Chernobyl and the Zaporizhzhia plant.

The IAEA said Ukrainian authorities had reported background radiation levels were normal and the fire had not affected "essential" equipment. The plant had not sustained any critical damage in the attack, Andrii Tuz, a plant spokesman, told CNN on Friday.

"The design is a lot different to the Chernobyl reactor, which did not have a containment building, and hence there is no real risk, in my opinion, at the plant now the reactors have been safely shut down," Mark Wenman, a reader in nuclear materials at Imperial College London, told the Science Media Centre (SMC).

The Chernobyl disaster took place at a plant that used Soviet-era, graphite-moderated RBMK reactors. But the Zaporizhzhia facility uses a pressurized water reactor known as a VVER model.

"The design of the VVER is inherently more safe and protected than the Chernobyl RBMK systems," explained Jon Wolfsthal, a senior adviser at Global Zero and former senior Director for Arms Control and Nonproliferation at the National Security Council, on Twitter on Friday.

A VVER reactor cannot "'run away with itself' as the RBMK could," Malcolm Grimston, an honorary senior research fellow at the Imperial Centre for Energy Policy and Technology in London, told the SMC.

But even if an explosion at a reactor was most unlikely, other incidents could occur as a result of shelling or fires at the site.

"It's really the electricity and the plumbing that you're worried about," Joseph Cirincione, a distinguished fellow at the Quincy Institute for Responsible Statecraft, told CNN on Friday.

Electricity at the Fukushima plant in Japan was cut off during the nuclear disaster there in 2011, while the reactors themselves remained intact. "That meant you could no longer pump the cooling water through the reactors, or the cooling ponds," Cirincione said.

"I don't think we're out of the woods yet. We have to make sure that the Russians who are taking over know what they're doing," he added.

Grossi, the IAEA director-general, told CNN on Friday: "What I'm telling (Russia) and everyone is that the utmost restraint is to be exercised in and around this type of facility. Because wittingly or unwittingly, you can very quickly go into a disaster, and this is why we're so concerned."

How safe are modern nuclear facilities?

The differences in design and safety standards mean that the possibility of a nuclear reactor at the site exploding and causing a disaster is not something concerning nuclear experts.

They noted that the threat would be somewhat higher if a nuclear reactor were to come under a targeted, sustained attack with the intention of causing a nuclear incident, which was not the case in Zaporizhzhia and would make little sense given the proximity of Russia's major cities to all of Ukraine's plants.

The pressure vessel of a modern reactor "is very robust and can withstand considerable damage from phenomena such as earthquakes and to an extent kinetic impacts," Robin Grimes, a professor of materials physics at Imperial College London, told SMC.

"It is not designed to withstand" attacks by explosive weaponry, he added. "It seems to me unlikely that such an impact would result in a Chernobyl-like nuclear event (but) this has never been tested and it is not impossible."

"It is therefore staggering and reckless to the extreme that shells have been fired close to a nuclear plant," he said. "Even if they were not aiming for the nuclear plant, artillery is notoriously inaccurate in a time of war."

How many nuclear plants does Ukraine have?

Ukraine relies heavily on nuclear power. The Zaporizhzhia plant contains six of the country's 15 nuclear energy reactors, according to the International Atomic Energy Agency (IAEA), and the facility alone accounts for one-fifth of the average annual electricity production in Ukraine, according to Energoatom, Ukraine's nuclear power operator.

That makes its seizure by Russian forces hugely significant; if the plant were to stop running, it would severely affect the energy supplies to millions of Ukrainians.

In total Ukraine has four nuclear plants -- two, including Zaporizhzhia, in the south of the country, and two more in the northwest, in regions Russian troops have not occupied.

Those do not include the closed Chernobyl plant, in the north of the country, which was occupied by Russian forces on the first day of their invasion of Ukraine. According to Mykhailo Podolyak, a Ukrainian presidential adviser, control of the Chernobyl zone was lost after a "fierce battle."

More than 90 members of the Chernobyl power plant operational personnel were held hostage by Russian forces after they took the plant, Ukrainian Ambassador to the US Oksana Markarova said.

The Chernobyl plant was shut down after the 1986 disaster, and has sat within an exclusion zone ever since, but construction and recovery efforts have continued at the site to reduce the risk of future radiation leaks.