How chocolate fell in love with Valentine's Day 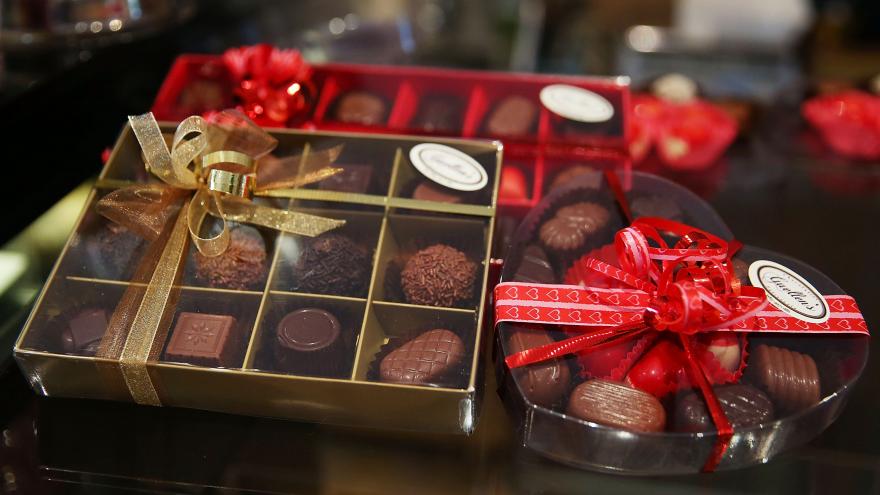 (CNN) -- In Western culture, romantic letters have been part of Valentine's Day since the Middle Ages. Poet Geoffrey Chaucer, best known for "The Canterbury Tales," is credited with writing the first Valentine's poem in 1385.

The connection between chocolate and Valentine's Day, on the other hand, is a fairly recent one by historical standards, reaching back fewer than 200 years. And, surprise, surprise — it all has to do with marketing. (Think those ubiquitous holiday jewelry commercials are patronizing and annoying? Wait until you read this!)

From bitter to sweet

There was nothing romantic about chocolate in its earliest incarnations. Xocolatl, or "bitter water," was a Mesoamerican drink made from ground cacao beans, chiles and spices. European explorers co-opted the beverage, bringing it back to the courts of Spain, France and England by the 1600s.

Having access to chocolate was a way for the ruling class to assert their dominance, and as such was "associated with masculinity and virility," according to Charles Feldman, professor of food studies and food systems at Montclair State University in New Jersey.

Until the Industrial Revolution, chocolate was also exclusively associated with the rich, since they were the only ones who had the means to enjoy it. "Sugar  —  and, by extension, chocolate  —  was a luxury, an expensive treat for the lucky few who could afford it," said Megan Giller, founder of Chocolate Noise and author of "Bean-to-Bar Chocolate: America's Craft Chocolate Revolution."

By the 19th century, sugar had become a commodity, turning sweetened cacao into an accessible treat for the working class, including women. And once women could enjoy chocolate, the connotations of the product switched from masculine to feminine, according to Feldman. The era's descriptors of femininity — sweetness, triviality, softness and indulgence — all became associated with chocolate.

Cupids, angels and roses were all part of the romantic vernacular by the 1800s, but it took one mere mortal to unite chocolate and Valentine's Day.

British chocolate maker Richard Cadbury had a lightbulb momentin 1861: He started packaging his company's chocolate confections in heart-shaped boxes. The "fancy box," as he called it, could be used to store keepsakes such as love notes, giving the packaging a selling point beyond its original use.

The idea of the heart-shaped box took off and "the marketing machine took over," as Feldman noted. Chocolate companies began producing boxes in an ever-increasing variety of styles to attract customers. "This gave men the opportunity to demonstrate their taste," Feldman said, "by choosing the right box for the particular woman."

The heart-shaped boxes could be covered in silk, satin lace and ribbons — extravagant presentations that made the chocolate inside almost incidental.

American chocolate manufacturers were all-in by the 1930s on Valentine's Day merchandise and advertising that targeted women as the recipients of their sweet designs. Whitman's Chocolate coined the phrase "a woman never forgets the man who remembers," which Feldman interpreted as an implicit reinforcement of societal gender roles.

Russell Stover introduced its bestselling Secret Lace Heart, a box covered in satin and black lace that remains more commonly known in the trade as the "lingerie box." (Stover also gobbled up its competition by purchasing the Whitman's brand in 1993.)

Chocolate ads became even more pointed in their focus on the sensuous nature of the gift, something women could well, pleasure themselves with. "At some point in the '60s, men don't even appear in the ads anymore," Giller said.

Galentine's Day and beyond

Centuries after the first heart-shaped box hit the stores, chocolate and women remain intertwined, with both popular culture and scholarly research suggesting that women crave and consume nearly twice as much chocolate as men.

Galentine's Day, which was coined in a 2010 episode of "Parks and Recreation," as a Valentine's-adjacent holiday celebrating female friendship, has taken on a life of its own. It's now both a rallying cry against the typically heteronormative marketing of Valentine's Day as well as a slogan to sell more chocolate to women.

Even if the message has taken on more of a female empowerment blush, "the big chocolate companies are doing what they've always done with heart-shaped boxes and bonbons," Giller said.

Even in Japan, where Valentine's Day has only been celebrated since 1958, the trend of purchasing "tomo choco," or "friendship chocolates," is supplanting the country's cultural tradition of women gifting chocolate to men for the holiday.

Worldwide, the Valentine's Day marketing barrage will likely never stop. For those in the chocolate business, "there's a chocolate season and it starts in October and goes through Mother's Day," Giller explained. And Valentine's Day is one of the biggest opportunities to make a profit. "In the summer, no one wants chocolate. That's why everyone's going so hard for gifts."

If you're in the market for a chocolate gift this year, think outside the heart-shaped box and pick up one of these creative chocolate products instead:

• Cacao infusion kit: For the cocktail enthusiast, Indi Chocolate's infusion bottles feature blends of cacao nibs and spices like cardamom, ginger and cinnamon. Pour in liquor like bourbon or vodka and create a bespoke beverage.

• Askinosie tasting bar set: Springfield, Missouri's Askinosie Chocolate is known for its collaborations with unexpected partners like Heath Ceramics. Try a sampling of unusually flavored bars, like avocado-rosemary and peppermint-cardamom, in a tasting set.

• Chocolate and cheese class in a box: Sweet and savory come together in this ultimate gift box, featuring 2 pounds of cheese, seven chocolate pairings, crackers and a recorded Zoom tasting session for you to enjoy on your schedule.