How Bourdain's favorite songs, movies and books inspired a film about his life 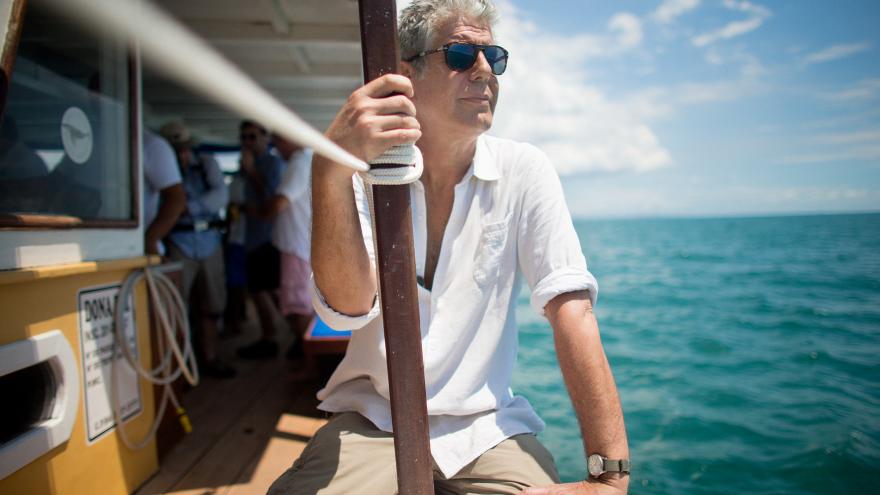 (CNN) -- His mission was a complicated one: Tell the complex story of the late Anthony Bourdain, a man he had never met.

Documentary filmmaker Morgan Neville said when he researches a film subject, he tries to get inside the person's head as much as possible. While researching "Roadrunner: A Film About Anthony Bourdain," he found a treasure trove of content to sort through so he could understand what fueled Bourdain.

Music was one of the ways Neville connected with Bourdain, who was very vocal about his tastes.

Neville hunted down every song Bourdain ever mentioned -- whether it was featured in one of his shows, used in an Instagram story or mentioned in his writings -- and he put them all in one playlist.

The 21-hour-long Spotify playlist contains songs by a diverse array of artists, including the New York Dolls, Sonic Youth, Snoop Dogg and Rihanna.

"I totally got his taste in music," Neville said. "It was informed by this post-'60s, proto-punk kind of energy and in your face-ness."

While working on "Roadrunner," the crew would listen to the playlist to channel Bourdain's energy. And several of the songs ended up in the film.

"I like to think if Tony saw the film, he would be pretty impressed with the music selection," Neville said.

One of Neville's favorite songs on the playlist is one Bourdain had posted on his Instagram stories called "Forbidden Colours" by Ryuichi Sakamoto. It's the theme song to the 1983 film "Merry Christmas, Mr. Lawrence," a bittersweet story about the Japanese-British war.

Neville wanted to use it in the film, so he wrote a letter to the composer -- explaining how Bourdain had loved his work -- to get permission to use it. It worked, and the tune made it into the documentary.

"Anemone" by The Brian Jonestown Massacre, an underground indie band, was another favorite of Bourdain's, according to his friend and fellow chef David Chang.

"Dave says in the movie that it's heroin music. I just think it's music that you want to be by yourself listening to. I think Tony was by himself a lot," Neville said.

No Wave, the downtown New York post-punk scene that Bourdain witnessed in the late '70s, shows up over and over on Neville's playlist. The music captures the lawlessness and hopelessness of the time. The songs are abrasive, confrontational and nihilistic.

Among Bourdain's favorite No Wave act was Iggy and The Stooges. Bourdain wrote about The Stooges' first album, saying it's "an antisocial masterpiece of do-it-yourself aggression and raw, nasty, dirty rock and roll."

In 2015, he said that he had never been more intimidated, more anxious, more starstruck than when he met rock legend Iggy Pop for the filming of the Miami episode of "Parts Unknown."

The episode closed with the song, "Passenger," one of Iggy Pop's more darkly romantic songs.

"It's this kind of haunting song of somebody who sees the world, but it is somehow separate from it at the same time. And I think that's a song that Tony could identify with," Neville said. "It's something that's more weary, world weary in a way."

"There were songs that stretched his rock and roll credentials in a way, but still, I think, make a lot of sense," said Neville of Bourdain's love of hip hop and R&B. "He got that there was genius in those artists."

How the big screen influenced Bourdain's view of the world

"Tony devoured movies like he devoured so much culture," Neville said.

Bourdain didn't travel much until his mid-40s when he started working on "A Cook's Tour," his first television show. Because of that, he understood the world largely through films. When he visited places for the first time, he would compare them with their depiction on the big screen.

Movie references seeped into his shows, often by Bourdain's own design.

For example, the Rome episode of "No Reservations" was inspired by Federico Fellini's "La Dolce Vita." Reflecting Fellini's style, Bourdain had the episode shot in black-and-white.

"I don't think that was the best idea. I'm sure there was a battle with the network about black-and-white on a food show," said Neville, laughing.

One of Bourdain's favorite films was "Chungking Express," a 1994 romantic crime comedy-drama. Bourdain was a fan of the writer and director, Wong Kar-wai, and liked his rich take on Asia.

Neville said Bourdain sought out darkly romantic movies that were beautiful at the same time.

Another all-time favorite film was the 1973 movie "The Friends of Eddie Coyle," starring Robert Mitchum and directed by Peter Yates. The film follows gritty working-class criminals, and Bourdain used the Boston-based film as inspiration for the Massachusetts episode of "Parts Unknown."

"It's a film where moral compromise is in the air and characters are trying to do their best and probably not succeeding," Neville said.

He also thought Bourdain liked the nuance of the story.

"He loved movies that didn't tell you what to think or how to feel when you come out of it," he said. "You know, films you can argue about."

Neville went on to say, "There's no way we can talk about Tony and movies and not talk about 'Apocalypse Now.'"

The 1979 war film follows the fictional Captain Willard's journey from South Vietnam into Cambodia during the Vietnam War on a top-secret mission to assassinate renegade Colonel Kurtz, who had won the trust of a local tribe. The film, based on Joseph Conrad's book "Heart of Darkness" set on the Congo River in Africa, served as a visual reference for the Congo episode of "Parts Unknown."

Key questions presented in the film deeply resonated with Bourdain: What did it mean to be a traveler in a foreign land? Was that relationship nurturing or poisonous?

While shooting "A Cook's Tour" in Los Angeles, Bourdain recreated a scene from the 1950 film "Sunset Boulevard" -- where he floated in a pool just like actor William Holden in the beginning of the movie. Holden played a struggling screenwriter who narrated the film from beyond the grave.

Neville said "Roadrunner" was deeply inspired by that film's style of narration.

"I immediately thought that's how I wanted to do this film," he said.

The documentary used Bourdain's narration pulled from TV, radio, podcasts, and audiobooks to tell the story of his life, recalling both "Sunset Boulevard" and the experiential feel of Bourdain's own shows.

"From the very beginning, I just had this idea of making sure that Tony could help tell the story, and that was 100% influenced by 'Sunset Boulevard.'"

Neville's use of A.I. to narrate several lines of Bourdain's written words stirred controversy when the film was released in theaters.

"It was a modern storytelling technique that I used in a few places where I thought it was important to make Tony's words come alive," Neville told Variety.

Bourdain was also a voracious reader.

He loved to read first-person nonfiction narratives, one of his favorites being Hunter S. Thompson's "Fear and Loathing in Las Vegas: A Savage Journey to the Heart of the American Dream."

"It was something that checked all the boxes for him. It was smart, it was funny, it was irreverent," Neville said.

Thompson's gonzo journalism, a style of writing where authors become part of the story as they are simultaneously experiencing and reporting from a first-person point of view, had a big influence on Bourdain.

"'No Reservations' owes a lot to Hunter Thompson," Neville said. Much like the book, the show was about a character throwing himself into a new world and coming out the other side with a deeper understanding.

Another of Bourdain's favorites was "Down and Out in Paris and London" by George Orwell, which served as a model for Bourdain's first book, "Kitchen Confidential: Adventures in the Culinary Underbelly," a tell-all about restaurant kitchen culture.

"Down and Out in Paris and London" is a romantic book about being young, having these incredible experiences and surviving to tell the story on the other side, much like Bourdain's memoir about all the challenges he endured in the restaurant industry and somehow managed to stay in the game.

In his downtime, Bourdain enjoyed books about spycraft, such as John le Carré's "Smiley's People," as well as reading mysteries like "52 Pickup" by Elmore Leonard, which is about a Detroit businessman being blackmailed after his infidelity was caught on camera.

"But when I find myself in a hole writing? I always go back to Elmore Leonard. He was a professional," Bourdain said in a 2017 interview with The New York Times about his reading habits. Bourdain found his work inspiring.

Due to the nature of his work, Bourdain also sought out books about the impacts of colonialism, like "The Quiet American" by Graham Greene, a work about colonial Vietnam that he brought along when he visited the country.

The book, Neville explained, is about being a colonial outsider in a country that views you with suspicion, but somehow, you're still inextricably linked to it, even though you'll never totally understand it.

Bourdain told The Times that "The Quiet American" made him cry. "That always gets me," he said.

The deep connections Bourdain clearly made with the media around him allowed Neville to connect with how the late host of "Parts Unknown" perceived and interacted with the world.

"I thought for a long time about making the film in a way that he was my audience," Neville said. "I wanted him to recognize himself and recognize those little things."