How beetles and warm weather are driving up lumber prices: 'I'm listening to my trees being killed' 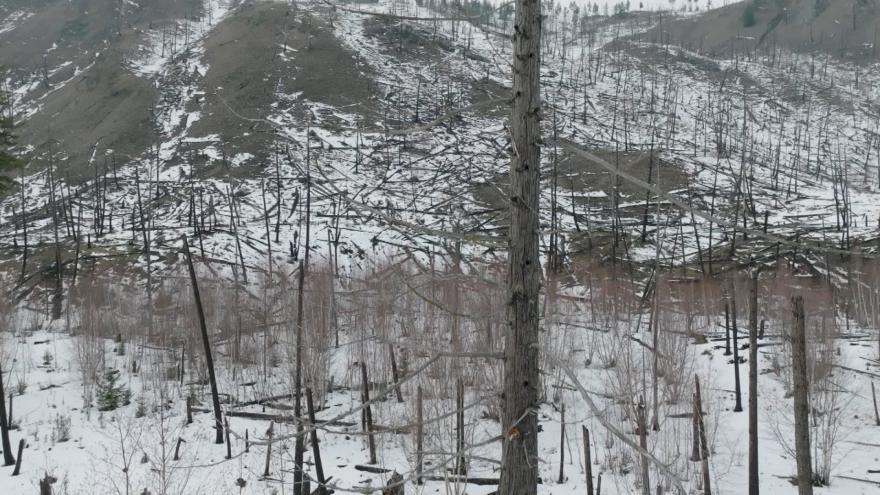 (CNN) -- Janice Cooke remembers the first time she heard bugs murder a tree over the phone.

It was at the height of the petulance plague, when the warming Canadian Rockies gave rise to swarms of beetles so Biblical they were able to kill 100,000 big lodgepole pines in a day, said Cooke.

"I remember calling my brother who lived outside of Prince George, British Columbia, at the time, and I asked what he was doing," she said. "He held the phone up against a tree and you could actually hear the beetles underneath the bark, and he said, 'I'm listening to my trees being killed.'"

Twenty years and 50 million devastated acres of forest later, the mountain pine beetle can share the blame for one of the worst lumber shortages in history, with prices jumping 200-300% higher than pre-pandemic levels.

Outrageous housing demand, a Covid-cursed supply chain and a 40-year timber trade war with Canada are also big reasons the cost of a 2x4 has tripled since 2019.

But Cooke -- a biologist and forestry specialist with the University of Alberta -- points out that today's crunch is also an example of climate inflation, which begins with a perfect storm of unnatural weather events made more likely by an overheating planet.

Thanks to their cold winters, Canadian softwoods grow slower and stronger than those in the southern US, a big reason almost one in every three vertical studs nailed into an American home starts as a pine, spruce or fir north of the border, according to the National Association of Home Builders.

But while a lodgepole pine can secrete sticky pitch to defend itself against an average beetle attack, they were no match for the nightmare swarms brought on "through a combination of warmer winters and hotter, drier summers," Cooke said. "We saw those populations not only rise to epidemic levels, but in some areas, what we call a hyperepidemic."

Cooke said beetle-kill lodgepole was considered at first to be a high-value wood for cabinetry, because the bugs help spread a fungus that leaves a distinctive blue tint in the grain. But the dead trees can only stand so long before the wood loses strength. To complicate things further, the resin of lodgepole pine is flammable.

"If the beetles win and that tree dies, it is not only drying out but it's got this extra resin in it, which is like fire starter," she said.

Before they could be salvaged, beetle-kill forests helped accelerate the record-shattering wildfires of recent years. And then freakish coastal storms washed out roads, rails and ports, breaking the supply chain between forest, sawmill and lumberyard.

"Climate change ... it impeded us a lot," said Jerry Howard, CEO of the National Association of Home Builders, as he strolled the setup for the organization's annual conference in Orlando. "It definitely is a contributing factor to the high prices."

As one of the industry's top lobbyists, he also blames politicians and their policies.

"The Biden administration has cut back on the harvesting of timber on our federal lands for environmental purposes, and so we need more lumber from outside," he said. "The Biden administration has not gone to the table to negotiate a long-term deal with Canada, meaning that the importation of Canadian lumber is less predictable. So, we've got to look somewhere else. In fact, we've opened up discussions with the German government about bringing more wood from Germany."

But Germany, Canada and the United States are also among the 141 countries pledging to stop deforestation by the end of the decade, which has contributed to ecosystem collapse, species extinction and global heating.

Both Canada and the United States are lowering the number of timber permits issued on federal land. But at the same time, they are among the nations around the world grappling with a shortage of affordable housing.

"It's not just dimensional lumber that takes a hit," said John Riddle of Turning Leaf Custom Homes. "It's cabinetry, windows, doors. Anything that has lumber in it is now going to become harder to get and cost more."

In a good year, his company will build six homes around Winter Park, Florida. Now he has 10 on the books; built for the kind of customers who can afford a 20-30% bump in price. But what about Millennials -- a generation larger than Baby Boomers -- who are now old enough to buy their first house?

"The increased price of lumber effectively blocks out qualified individuals who are purchasing their home for the first time," Riddle said. "You've got to find alternatives. If you can't get the product, you got to figure out how to get something that you can use. You can get your houses built, right?"

Following customer demand, he's switched completely from wood-framed exterior walls to a system of insulating foam molds, supported by steel rebar, and injected with concrete. Drywall is hung on the inside and any number of decorative options cover the outside, hiding the bunkerlike strength.

He says he can build a house 50% more energy efficient and 100% more fireproof at a price that is increasingly competitive with wood.

"In my mind, there's no reason why this is not more prevalent in our country, but builders like to do what they always do, right?" Riddle said.

Since cement has a relatively big carbon footprint, timber producers can argue that wood is a better choice than stone or steel -- if cut sustainably.

"If you're building with wood, you're capturing carbon for the life of that product," said Susan Yurkovich, president of the British Columbia Council of Forest Industries.

Along with homebuilders, Yurkovich is among those lobbying the Biden administration to ease tariffs which doubled from around 9% to 18% in late 2021.

"At a time when there's a great demand for our product and when the US cannot meet its own domestic demand, it's absolutely crazy to us that US producers continue to employ protectionist trade barriers to Canadian lumber," Yurkovich said.

But as major Canadian lumber companies announce that they are moving closer to the more plentiful Southern yellow pine with the expansion of new sawmills in Louisiana and Georgia, Yurkovich kills any hopes that Canadian lumberjacks can just cut more trees faster.

"Our fiber supply picture is declining in the province of British Columbia at a time when we're running into a picture of very strong demand," she said. "Parks and protected areas are a huge piece, so it's not like you can just say all of a sudden we're going to lift up the cut. And frankly, you don't want to do that because we are an industry that is going to be around for generations if we harvest at a sustainable level. So, for the midterm, British Columbia is going to have less lumber going into the US marketplace."

"It takes about a hundred years for a mixed forest like this to grow," Cooke says as she strolls through the woods near Jasper National Park.

In her lab at the University of Alberta, the biologist is searching for the genes that help trees become better survivors and her work helps inform government timber limits; a calculation the average homebuyer doesn't often make.

"More and more that annual allowable cut is taking into account the full value the forest provides. Freshwater, recreation, First Nations cultural values, the creatures that need it, carbon capture. This is the business case for our trees for their entire ecosystem services, and not just the price of a two-by-four."