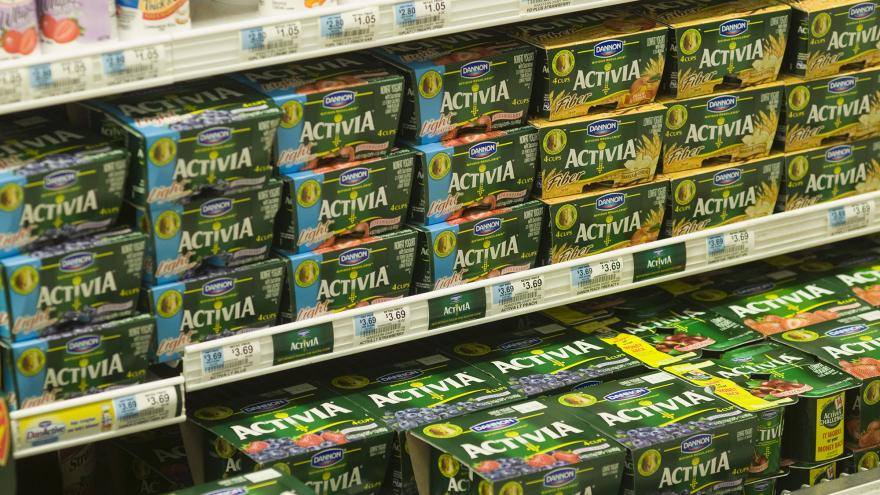 (CNN) -- If you hear the word "Activia," your first thought might be of Jamie Lee Curtis. You may also think of its dated commercials, inwhich women complain of irregular digestion, and, well, poop.

Danone launched Activia, the probiotic yogurt that claims to support gut health, in the United States in 2006. Curtis became the brand's spokesperson the following year. The ad campaign — touting Activia's role in keeping consumers "regular" — inspired some ridicule, but it also boosted sales.

The brand has since moved on from Curtis, tapping other spokespeople over the years and modifying the way it promotes its products.

Today, Activia's marketing campaigns are a far cry from what they were a decade ago. A combination of new ads and evolving consumer trends have helped Activia shed its image as a spoofable digestive aid, and place it instead in the trendy realm of wellness and gut health.

So far, it seems the strategy is working. The brand's US sales grew from $472 million in 2019 to $506 million in 2021, according to the company. Activia could surpass Light + Fit to become Danone's number one US yogurt brand this year.

But Activia has to be careful not to drive away long-time customers who first picked up the product because they related to Curtis and her digestive complaints.

"It's a very delicate move," said Pedro Silveira, Danone North America's president of yogurt. "We don't want to alienate [our core customers]," he said. "But at the same time, we have to recruit new ones."

When Danone first brought Activia to the US, it had to sell consumers on the concept of a probiotic yogurt. Probiotics are live organisms, including bacteria and yeast, that arefound in yogurt and other products. Experts say that eating probiotics can help with digestion or other issues, but some studies have shown that there's not much evidence to suggest that probiotics do all that much for the average consumer.

"Not all probiotics are created equal," said Miguel Freitas, VP of health and scientific affairs at Danone. "Experts have suggested that most probiotics have strain-specific mechanisms of action which are linked to different benefits."

On its website, Activia says that its yogurt "may help reduce the frequency of minor digestive discomfort," such as "bloating, gas, abdominal discomfort and rumbling," when eaten twice a day for a couple of weeks and paired with a healthy lifestyle and balanced diet.

With Curtis as its spokesperson, Danone distilled that information to a simple message: If you want to keep your bowel movements on track, eat Activia. In commercials, Curtis explained that eating Activia helped keep her regular. Sometimes, she was joined by other women who also complained of digestive issues.

Nobody talked outright about bowel movements, but the implication was clear.

The ads, not surprisingly, were mined for parody. Saturday Night Live aired a sketch in 2008 in which Kristen Wiig, playing Curtis, ceaselessly spoons Activia into her mouth and —spoiler alert — soils her pants while shooting a commercial. It's not the most sophisticated humor, but apparently it resonated — the following year, Wiig reprised the role in an even more scatological sequel.

It may seem like the whole thing was a big flop. But in fact sales were soaring. "In that particular moment, that campaign was very successful," Silveira said.

The brand had "a huge growth period when [Curtis] was our brand ambassador," Jeffrey Rothman, then a marketing VP at the company, told The New York Times in 2014.

But it wasn't all smooth sailing — in 2010, the company, then known as Dannon, agreed to settle Federal Trade Commission charges of deceptive advertising. The FTC alleged that commercials stating that just one daily serving of Activia offered relief for irregularity were misleading.

"Dannon agreed to more clearly convey that Activia's beneficial effects on irregularity and transit time are confirmed on three servings per day," the company said in a statement at the time, according to a 2010 report from The New York Times. "The essence of Dannon's advertising remains unchanged and will continue to be truthful and in compliance with all laws and regulations," the company added.

Danone didn't see the parodies of its campaign as a bad thing, Silveira said, noting that it's possible to "benefit" from such attention, and use it to "engage in a positive conversation."

Even so, Danone started shifting away from that type of messaging. Curtis worked with the brand through 2013. The following year, Activia announced a slate of new spokespeople, including Reba McEntire and Laila Ali. Instead of highlighting regularity, the new campaigns linked eating Activia to having a "happy tummy." That year, the brand also featured pop sensation Shakira in a commercial.

In July 2020, Activia launched a new marketing initiative focused on the buzzier, less precise concepts of gut health and wellness.

"Our goal is to connect with a younger audience and illuminate how the gut is the starting place for so much about how we feel," Sonika Patel, vice president of marketing for Danone North America, said in a statement at the time. "Bright, fun and musical, our new direction calls attention to how much of your daily life is affected by your gut."

The "A to Z" commercial features an acrostic song and a diverse roster of non-celebrities working out, dancing, kissing and, of course, eating yogurt.

A few years ago, "we saw an opportunity to rejuvenate the brand," said Silveira, describing it as an evolution rather than a rejection of that original Curtis campaign concept. Danone tested the new commercials to make sure they didn't alienate consumers, Silveira added. The brand now points to the updated campaign as a growth driver.

"You market to what people want to be, not necessarily what they are," said Bob Samples, executive-in-residence at Western Michigan University, where he teaches students about food and consumer goods marketing. The lifestyle in the commercials could feel aspirational to older consumers, he said. "If I market this at Millennials, I'm probably grabbing the Baby Boomers."

The quest for gut health

In a 2021 report, research firm Mintel said that when asked which benefit would encourage them to try more yogurt, about 34% of respondents pointed to gut health.

Interest in probiotics really kicked off during the pandemic, said Claire Lancaster, senior strategist on the food and drink team at WGSN, a trend forecasting company.

"We saw huge spikes of the conversation around [gut health] during the start of the pandemic," she said. "It's gained steam since then."

Online, younger consumers have been "calling out specific [probiotic] strains that they like to take," Lancaster noted. "It's become quite trendy to be hyper aware."

Samples suggested that younger consumers think of probiotics as a kind of recovery aid, even if that may not be the case. "The mindset of a lot of young people is if I eat enough yogurt, I can have a bunch of french fries," Samples said.

Plus, yogurt sales have been growing in general, especially through the Covid-19 pandemic. US yogurt retail sales rose from $9 billion in 2019 to $9.3 billion in 2021, according to research firm Euromonitor.

Activia is also taking other approaches to entice consumers. One example: sippable versions of Activia, sold in bottles, whichlet consumers drinkthe product on the go. In its report, Mintel said that the "yogurt drinks segment will fuel post-pandemic growth."

Between the new ads, the new varieties and the trendiness of gut health, Activia now looks very different to today's customers. Silveira thinks that younger Activia consumers, "were not exposed to the Jamie Lee Curtis campaign," and won't associate the messages in her commercials with the product.

Samples agreed that consumers generally have a short memory for things like marketing, but said they will recalla few things.

"I think everybody will remember Jamie leading the commercials, but probably not what the message was ... other than a lot of people made fun of it [for being] the yogurt that made you poop."