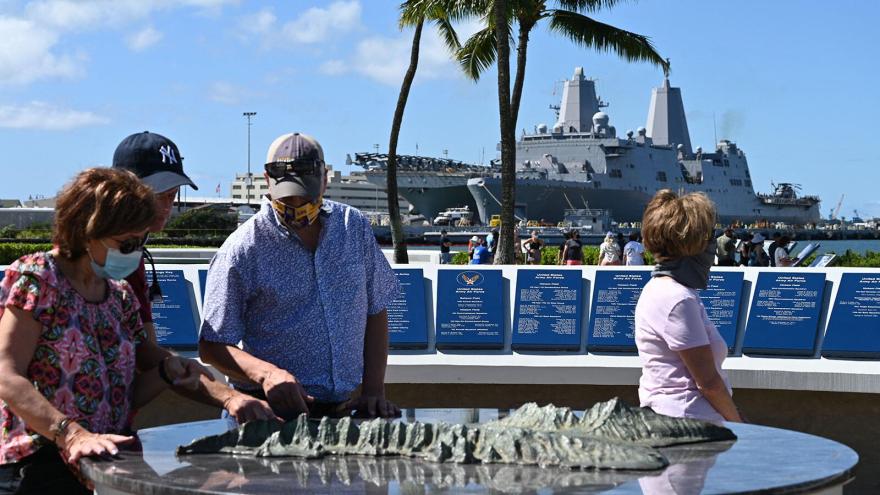 The National Pearl Harbor Memorial is a stop on Kajihiro's DeTours, where visitors discuss the United States' rampant militarization of Hawaii in the 19th and 20th centuries.

(CNN) -- The Hawaii most tourists see is one of azure waters and towering resorts, of "aloha" and "ohana" and hula.

The tourism industry in Hawaii powers its state revenue, but that reliance on tourism has resulted in Native Hawaiians getting priced out of their homes, climate change wreaking havoc on the natural landscape, and a lack of respect for the 50th state that is also the ancestral land of more than half a million people.

"I think that it is too easy for people to visit places like Hawaii," Kajihiro said. "It conditions visitors to feel entitled."

The industry must change to improve the futures of Native Hawaiians, Kajihiro told CNN. He's one of several residents who have worked to educate visitors and return some elements of Hawaiian culture to the people from whom it originated. If visitors to Hawaii decenter themselves and instead take with them respect and a willingness to learn -- or choose not to visit at all -- then Hawaii may be preserved for the people who have called it home for centuries, activists say.

For many residents, living in Hawaii is no vacation

Tourism is Hawaii's largest single source of private capital, per the Hawaii Tourism Authority. Even amid the Covid-19 pandemic, it remains incredibly lucrative: In April alone, visitors to Hawaii spent over $1 billion in the islands, according to a state report marking the recovery of tourism since the start of the Covid-19 pandemic.

But what's profitable for Hawaii's economy can negatively impact the lives of Native Hawaiians and yearlong residents. To combat drought conditions, residents last year were asked to reduce their water consumption or face a fine while large resorts continued to use far more water. There are millions more annual visitors than there are permanent residents -- in 2021, there were more than 6.7 million visitors compared to 1.4 million residents -- which can cause carbon emissions to surge and overuse of its beaches, hiking trails and other natural wonders. Hawaii has even been called the "extinction capital of the world" for the number of species who've gone extinct or are at high risk of dying out.

It also has the highest cost of living in the nation, partly due to the state having to import around 90% of its goods. Its housing market is one of the most expensive in the country, ProPublica and the Honolulu Star-Advertiser reported in 2020, and with a large demand for land and a limited amount of it, Native Hawaiians can spend decades waiting to reclaim ancestral land, leading some to move from the islands.

"Tourism normalizes and conceals the current dystopian reality experienced by many K?naka Maoli and the poor immigrant communities in Hawaii," Kajihiro told CNN. (K?naka Maoli is the Hawaiian-language term for Native Hawaiians.)

To empower Native Hawaiians and return some of their rights, the tourism industry needs to change, beginning with its ethos, Kajihiro said.

'DeTours' show the real history of Hawaii beyond the beach

In an effort to reclaim the histories of Hawaii and educate residents and visitors about the impacts of colonization, militarization and tourism, Kajihiro created the Hawai'i DeTour Project. The program, which he runs with lifelong activist Terrilee Keko?olani, aims to "interject a more critical historical account of Hawaii" in hopes that it'll start conversations about social responsibility and create solidarity with social justice and environmental activist efforts in Hawaii.

Kajihiro leads DeTours to locations like downtown Honolulu to discuss Hawaii's former sovereignty; to 'Iolani Palace, where the US supported a White settler-led coup against Queen Lili'uokalani; to military landmarks like the Pearl Harbor memorial to discuss American efforts to transform parts of Hawaii into military strongholds.

Though Kajihiro doesn't advertise his services, visitors are increasingly seeking them out. While he prioritizes educational and political groups that can help create change locally, he has seen both residents and visitors on his tours, some of whom go on to become involved in the causes he highlights.

"I guess it could be seen as a good sign that people want to learn and be more responsible as travelers," he said. "But there are also many people who simply want the novelty of a 'reality' tour or seek to assuage their guilt by doing a more 'socially responsible' tourism. I'm not interested in giving people permission to visit Hawaii guilt-free."

One way to support Native Hawaiians is to not visit at all, some say

Two educators in Hawaii borrowed the name of Kajihiro's operation for their book, which also shares his principles. "Detours: A Decolonial Guide to Hawai'i," co-edited by Vernadette Gonzalez and H?k?lani Aikau, is no ordinary guide book -- it's a call to action.

The book is designed to educate readers about Hawaii's past and present and the negative impacts of colonization, militarization and tourism. Even if readers never make it to Hawaii, the stories transport them to some of the sites Kajihiro leads his groups to. In the introduction to the book, Gonzalez and Aikau write that not all readers will be "invited or allowed to go to all of the places that are described," and some locales were left out entirely because they're "not meant for outsiders."

Many tourists' relationship to Hawaii is an extractive one, Gonzalez and Aikau write, and that relationship must shift to one of support if the Hawaii tourists know and the Hawaii its residents live in are to continue to exist. Even better, they write, would be choosing not to vacation in Hawaii at all.

"Sometimes the best way to support decolonization and Kanaka '?iwi (Native Hawaiian) resurgence is to not come as a tourist to our home," the editors write.

Improving tourism begins with respect for the islands and Native Hawaiians

Of course, there will always be tourists in Hawaii as long as it remains the islands' top industry -- and as long as its beaches beckon to guests with deep pockets. The nonprofit Sustainable Tourism Association of Hawaii connect tourists with local attractions that emphasize cultural and environmental responsibility. The Coconut Traveler, a travel company created by Debbie Misajon, the granddaughter of Filipino immigrants who moved to Hawaii to work on sugarcane plantations, is aimed at wealthy guests and charges a responsible tourism fee, 100% of which goes to local organizations that work to sustain Hawaii's natural beauty. Recentering the focus of a trip to Hawaii from the guest to the island and its residents might lighten the footprint a tourist leaves there, Misajon told CNN.

"I'm all for coming and enjoying the islands, but (I) encourage people to find ways to be part of the solution," Misajon said. "It might be trite, but spend your money locally."

Making fundamental changes to the tourism industry should begin with returning rights to Native Hawaiians and letting them decide how they want their culture to be shared and consumed, if at all, Kajihiro said. There's already a model of this in New Zealand, where the M?ori people have control over how their culture is represented and experienced by tourists, he said, with an emphasis on mutual respect.

"Let's abolish the word 'tourism,'" Kajihiro said. "The very term privileges the consumer, the act of consuming places, and the transactional relationship."

"As a visitor, you have the burden to learn, act responsibly, not be a burden and respect your hosts," Kajihiro said.