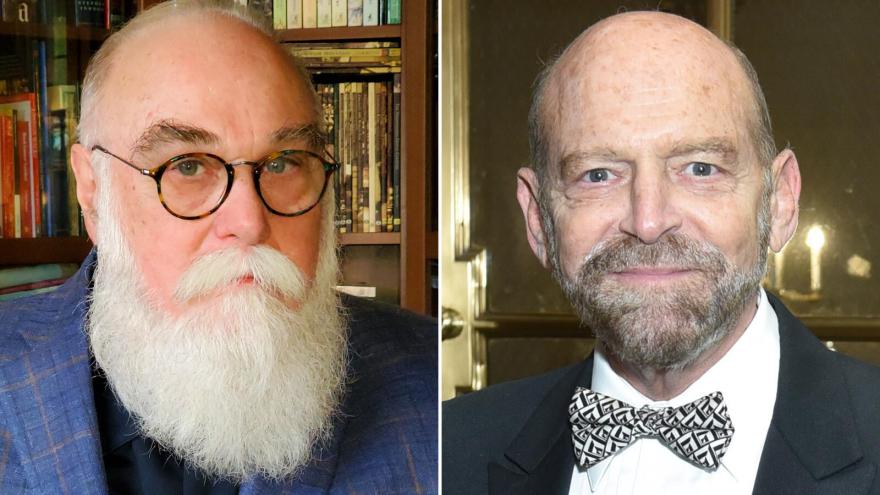 Mark Bryant, left, and Mike Klein launched the Gun Violence Archive to try to log every incident of gun violence in the US in real-time.

(CNN) -- In the Supreme Court decision overturning a New York gun law, the three liberal justices opened their dissent by citing data from two of the leading researchers of gun violence in America.

The first was the CDC. The second was the Gun Violence Archive.

"Since the start of this year (2022), there have been 277 reported mass shootings — an average of more than one per day. See Gun Violence Archive," Justice Stephen Breyer wrote in June in the opening paragraph.

The dissent was just the latest example of the growing influence of the Gun Violence Archive, a tiny nonprofit that has for less than a decade attempted to log every single incident of gun violence in the US in real time. The organization has been cited by the Supreme Court, policymakers and media outlets like CNN primarily for its ongoing tally of mass shootings, which it defines as any incident in which four people are shot, excluding the shooter.

That increasing visibility is a sign of success for Mark Bryant, the executive director of the Gun Violence Archive. He told CNN he started noticing the phrase "according to Gun Violence Archive" in news articles and Google searches a few years ago and sees it as a positive.

"We realize that we are making a difference. We're making the conversation consistent," he said. "If they're using 'according to Gun Violence Archive,' they're using consistent vetted data, and that legitimizes their story as much as it does us."

Yet for all its influence in providing that data, the Gun Violence Archive is remarkably small-scale. The organization is funded almost entirely by a single octogenarian donor, has no office space or any full-time employees, and is led by a bushy-bearded Kentucky gun owner who sold several of his firearms to help launch the group.

That this bare-bones organization informs the highest levels of power underscores the startling lack of timely, standardized data on American gun violence. The FBI collects data on aggravated assaults and murders, and the CDC collects data on total deaths from firearms. Yet both release that information months if not years after the fact, making it difficult to understand new trends or determine the impact of legislation or policies.

"Imagine trying to understand baseball where you're only collecting some stats and you're publishing them nine months after the season ended," explained Jeff Asher, a gun violence researcher and co-founder of consulting firm AH Datalytics. "It's an absurdity that we don't collect better systemic data there."

The Gun Violence Archive's recent prominence comes after three horrific mass shootings in the past few months: the racist attack on Black people in a New York supermarket, the slaughter of little kids at a Texas elementary school and the killing of 4th of July parade-goers in Illinois.

In late June, President Joe Biden signed into law major gun safety legislation with bipartisan support, the most significant law addressing gun violence in nearly three decades. In a speech pushing for that legislation, Biden noted that there had been 20 mass shootings in the week after the Uvalde, Texas, school shooting -- data likely pulled straight from the Gun Violence Archive.

"Everybody needs a consistent set of information, and until the government can come up with near real-time, very granular data, we're it," Bryant said. "So I see no reason for us to stop."

A provocation turns into a dataset

The Gun Violence Archive grew out of an interactive project by Slate magazine that was launched as a provocation.

In the wake of the December 2012 mass shooting at Sandy Hook elementary school, Slate's senior editor of culture at the time, Dan Kois, wanted to do something that would force people to confront the scope of America's gun violence, he told CNN. He was angry about the shooting and became further frustrated when he tried to look up real-time gun violence data and found only outdated information from the CDC.

"It seemed surprising to me that there was no central location where anyone was keeping track of gun violence as it happened," Kois said.

The CDC's death data is based on death certificates certified at the state level, and the timeliness of those certificates varies from state to state, said Jeff Lancashire, a spokesman for the National Center for Health Statistics, a unit of the CDC. In addition, the Justice Department's collection of firearm death data from crime reports requires an investigative process, which takes a long time, he said.

To fill the void, Kois and Slate's interactives lead, Chris Kirk, teamed up and launched a project attempting to track all gun violence in the US a couple weeks after Sandy Hook. But their data was haphazard and incomplete, largely relying on an anonymous Twitter account called @gundeaths that tweeted local news stories of gun violence. And updating the database rapidly became "overwhelming" for the duo, Kois said.

Still, the project garnered media attention, and a handful of committed volunteers reached out to try to fill in the gaps in the data. Bryant was one of those volunteers.

A 67-year-old with a Santa beard, Bryant has spent his career in systems architecture, or building and designing computer systems to make data accessible and useful, primarily at IBM. A native of Kentucky, he also has a personal comfort with guns. He learned to fire a rifle at about 5 or 6 years old by shooting at rats at the garbage dump, and he has continued target shooting as a hobby as an adult.

In November 2012, when a blood clot sent him to the ICU for over a week, he decided to make a career change. After recovering, he came across the Slate gun violence interactive and began "bugging them" that they had missed certain shootings in their database, he said. He bothered them so much that they eventually turned over their passwords to him so he could update the project himself.

"One thing I remember from those days is that Mark was really rigorous about the data," said Kois, the Slate editor. "Every time there were problems or discrepancies with our data it drove him crazy. It also drove us crazy, but it drove him crazier."

Slate looked about for someone to fund the project on a more permanent basis and found Mike Klein.

Klein, 80, had co-founded the real estate and IT company CoStar Group in 1987, and he has used that wealth to fund initiatives focused on transparency and real time access to information. In 2005 he co-founded the Sunlight Foundation, a nonprofit group that uses data and technology to make government work more transparent. The organization closed in 2020 and its work and staff were moved to the Internet Archive and the Berkman Klein Center at Harvard.

"I have a fundamental interest in and commitment to utilizing information to make intelligent decisions," Klein explained.

In spring of 2013, Klein offered up his own money to bankroll the gun violence data project independently and take it out of Slate's overwhelmed hands. He and Bryant connected and they agreed to use Klein's funding and Bryant's data expertise to create the Gun Violence Archive.

Bryant also put his gun collection toward the effort. He sold several Colt Python revolvers for about $3,000 to $3,500 each and put that money toward paying the starting staff.

"I like the balance of that," he said. "It paid for operating expenses for me and the four other people that were starting with us. That was the start."

After Slate's one-year experiment ended, the Gun Violence Archive launched with its own website on January 1, 2014.

How the Gun Violence Archive works

For all its data background, the Gun Violence Archive's work is, at its heart, basic journalism.

Researchers scrape data automatically from about 7,500 law enforcement agencies, media outlets and more organizations, Bryant said. They then comb through the results, double check media sources, follow up with police, and add that information to the database. Most shootings are added to the system within about 72 hours, Bryant said.

About 20 people work under Bryant's direction, but there are no full-time employees; all of the workers are paid as independent contractors, Bryant said. They live across the world and come from a variety of backgrounds, but over half are librarians, he said.

The group has sought to collect data not just on the number of deaths and injuries but on the nature of a shooting: whether it was a domestic incident, police-involved, unintentional, or defensive; where and when it took place; and the age or identity of the victims.

"From the beginning, we really focused on making sure that we had a comprehensive view of all the different" types of gun violence, Bryant said.

The researchers are trained using a 50-to-60-page manual that defines the group's methodology in detail. As needed, they go back and revise their reporting as new information is released or if they discover they had missed some shootings.

The database is not perfect. Bryant believes their data undercounts non-fatal accidental shootings as well as shootings on Native American reservations, likely due to a lack of reporting. Still, he said the differences are generally minimal, and their end-of-year data holds up well compared to the FBI's and CDC's reports.

Asher, the gun violence researcher, praised the Gun Violence Archive's work as "one-of-a-kind" and said it was an "amazing" tool for understanding broad trends and year-to-year changes. However, he has found that their data is sometimes a little bit off from police incident-level reports, making the database difficult to use on a really granular level.

'We are simply against gun violence'

Klein and Bryant have emphasized from the start that the Gun Violence Archive is non-partisan and non-advocacy.

"We basically didn't want to undermine our ability to be cited as a source," Klein said. "And I think that's worked extremely well."

"We want to convey statistics only," Bryant said, "and let other people draw conclusions from those statistics."

The Second Amendment Foundation, a nonprofit gun rights group, has criticized the Gun Violence Archive's expansive definition of the term as sensational and misleading.

"When most Americans hear the term 'mass shooting,' they picture a crazed gunman stalking the halls of a school or a shopping mall, coldly and randomly executing innocent young victims," the foundation wrote. "What does not come to mind are rival drug crews shooting it out in Chicago or Detroit, or a madman murdering his entire family."

In conversation, Bryant used his gun ownership background to push back against criticisms from gun rights groups like the National Rifle Association or the Second Amendment Foundation. He said the Gun Violence Archive is "anti-gun violence" and compared it to the nonprofit group Mothers Against Drunk Driving.

More than eight years after their launch, Klein said he was proud of what they had achieved. Given their respective ages, he has begun searching around for a permanent funding source as well as a successor to Bryant if and when he retires.

"Mark has achieved the goal, which is to have credible, online, free to anybody source of reliable information about ... gun violence," Klein said. "It's been used to inform discussion and debate, and the question is whether or not we can as a country do something with that information that's useful."