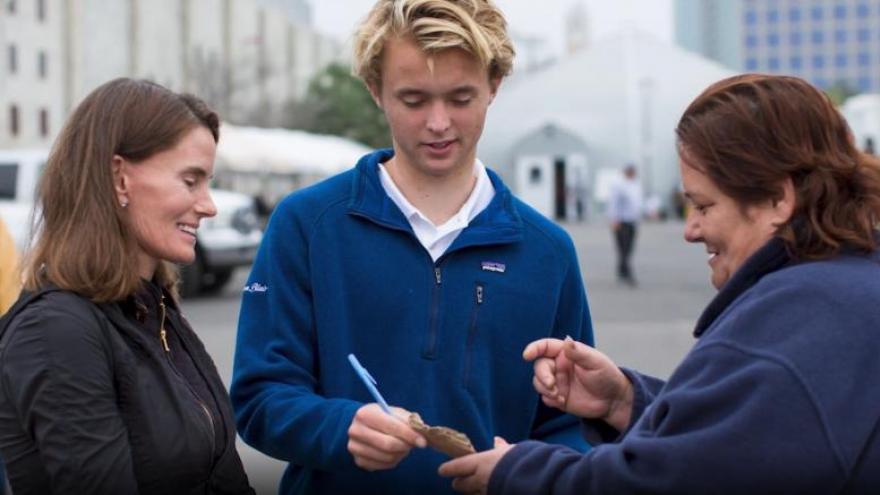 Kevin Barber (center) and his mother, Dr. Carolyn Barber (left), talk to a Wheels of Change worker. Their program is run by the Alpha Project, a San Diego organization providing services to homeless people.

(CNN) -- Kevin Barber was just 15 years old when he had an idea that would change downtown San Diego.

His mother, Dr. Carolyn Barber, worked in a busy emergency room and would come home with stories about the homeless patients she had treated there.

"We were trying to figure out if there was some kind of work program or something that we do for the homeless instead of just treating them with medicines," Dr. Barber said.

One night, Barber -- who is now 19 -- found a TED Talk from Albuquerque's then-mayor Richard Berry, titled "A practical way to help the homeless find work and safety."

The former mayor had launched an initiative to help the homeless by giving them a day job, paying them to clean up the streets. It worked so well, he encouraged other cities to try it.

The idea piqued Barber's interest. After doing some more research, he started a GoFundMe account to help launch his own version of the program in San Diego called Wheels of Change. The non-profit, which he launched at age 16, offers employment to those in need, helps keep the city clean and works to end homelessness.

A partnership to help end homelessness

At the beginning, getting Wheels of Change moving wasn't easy. And to make his dream a reality, Barber needed to find an organization to partner with.

The obvious choice was Alpha Project, a San Diego-based non-profit focused on ending the cycle of homelessness in the city's most vulnerable populations.

Bob McElroy, who was once homeless himself, runs the Alpha Project. At first, he was skeptical of the teen with the big idea.

"I thought it was a college project or something," McElroy said.

He said he's seen many students with the best of intentions volunteer to work on homeless causes. Most are scared away when they encounter their first homeless person with severe mental illness.

But Barber, now a sophomore at Santa Clara University, kept showing up at his office.

McElroy liked the idea, but told the Barbers that for the program to really succeed, they needed to find a work supervisor everyone on the crew would look up to.

Enter Kenneth "K.B." Allen, a former gang member who turned his life around and now encourages others to get off the street.

In his role with Wheels of Change, Allen drives the crew around town as they clean up trash, and shares encouraging words with everyone he comes across.

Once Allen was on board, McElroy and Wheels of Change sent off their first group of workers, many of whom had been jobless for decades.

"We put our first van out there and I'll never forget, it was like sending my kids off to school," McElroy said. "We had folks that I've known out here for 20, 25 years put on their bright construction vests ... and they're getting on a van to go out and work in the community. I was all choked up."

Now, Wheels of Change employs 20 people a day, who are each paid $52 in cash at the end of their four-hour shift (with a lunch break in the middle).

The "stipends" or worker salaries are completely funded through donations to the non-profit. But after the program proved successful, the city began supporting the program too, contributing money for expenses like van maintenance and cleaning supplies.

Since the program launched in 2018, the workers have cleaned up over 180 tons of trash.

One of the organization's biggest impacts has been picking up drug paraphernalia, especially in areas where there are kids around, some San Diego residents told CNN.

Some business owners also told CNN that they love seeing their front streets cleaned of debris. They frequently run outside to thank the workers.

"I got to see firsthand that actually everyone adored us and that we were doing a good thing for everybody, so people could actually walk down the streets and be safe," said Kathleen Knight, who often works for the program.

Peter Seidler, one of the owners of the San Diego Padres, said the area around Petco Park is now cleaner, and that there are fewer people sleeping on the streets.

"It's really remarkable that with all the effort that this city has put into helping homeless people for years and years, this is among the very best of programs that was conceived, and ultimately has been put into action and continues to grow," Seidler said.

How a little cash can change a life

McElroy said it's important to him that the homeless workers don't spend their money on drugs or alcohol. He's ensured the workers have bank accounts, and has brought local financial institutions down to the shelter so workers could set up their own accounts.

Workers said the money that they've earned has made a big impact.

"(It) makes you feel like you're a citizen again," said Louis Varga, who works for Wheels of Change.

Other workers have used the money to pay for college classes or transportation costs.

Sometimes, just a little cash can turn a life around.

Dr. Barber said she remembers when one of the homeless men that worked for Wheels of Change landed a job interview. He had a business suit to wear, but no dress shoes.

"So he came out, worked a couple of times, bought some new shoes and now he's working over at the Hilton," Dr. Barber said.

But there's more to Wheels of Change than the financial impact.

One of the most important aspects of Wheels of Change is the peer-to-peer outreach that takes place. The workers talk to other homeless people and encourage them to get off the streets.

"I saw people coming into the facility for services that would have never gone to a shelter before," McElroy said. "But because they heard from their brothers and sisters, and they had a relationship and a trust with them ... they came into the facility. And some of those people are in permanent housing now."

Wheels of Change graduate Cheryl Lozano is one of those success stories.

"I now have a job and am employed full-time," she said. "I have my own home, I have a car, and most of all, I have my self respect back."