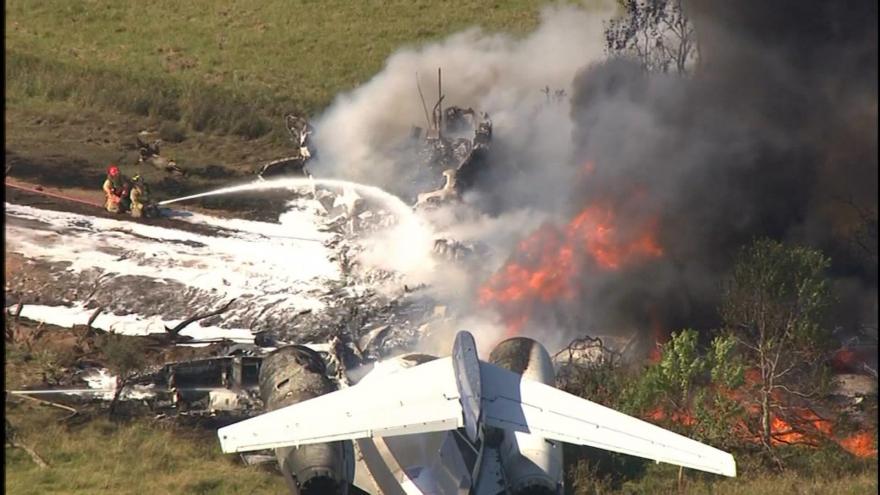 When a plane carrying 21 baseball fans to a playoff game crashed in Houston, pictured here, one passenger remembered hearing the words "get out, get out" as flames started to engulf the aircraft.

(CNN) -- When a plane carrying baseball fans to a playoff game crashed in Houston Tuesday, one passenger remembered hearing the words "get out, get out" as flames started to engulf the aircraft.

"It was already on fire before we got out of it!" the passenger, who didn't want to be named, told CNN affiliate KHOU.

The 21 people on board evacuated safely, and no major injuries were reported.

"It's not as rare as you think," CNN aviation analyst Mary Schiavo said of the fact that no one died.

Modern aircraft are designed for passengers to be able to evacuate within 90 seconds, according to Schiavo, former inspector general of the US Department of Transportation and a lawyer who has represented fliers and crew members of several aviation accidents.

"I'm going to give credit to both the Federal Aviation Administration... and the International Civil Aviation Organization, which put in place the evacuation rules you have to have enough doors and emergency exits on modern planes to get people out," Schiavo said. "And that has been documented to saving thousands of lives."

Schiavo pointed to the fiery 2005 crash of an Air France flight in Toronto, where nearly 300 passengers and twelve crew members survived.

And to an Aeromexico flight carrying 103 people that crashed in 2018 just after taking off from an airport in northwestern Mexico, forcing passengers to escape via emergency slides before the aircraft went up in flames. No one died.

"If you put the pictures of those four flights together ... you will be stunned how similar the pictures look because it's just total devastation," Schiavo said. "That people got off is a testament to exit protocols and having exits on planes."

The FAA standard requires that aircraft manufacturers demonstrate all passengers and crew can evacuate an aircraft within 90 seconds by conducting live demonstrations of simulated evacuations or through testing and analysis.

'We thought it was going to explode'

On Tuesday, an MD-87 carrying Houston Astros fans to their team's game against the Red Sox in Boston never gained altitude at takeoff and crashed into a fence before bursting into flames.

"Going down the runway, and it just all the sudden they slammed on the brakes," the unidentified passenger told KHOU.

"Things were flying around and when it finally came to a stop, they just said 'get out, get out' because we thought it was going to explode," the man said.

The emergency slides deployed and passengers were able to slide down to safety.

Two people were transported to a hospital with minor injuries, officials said.

National Transportation Safety Board investigators arrived at the site on Wednesday morning. The cause of the crash hasn't been determined.

The plane traveled about 500 feet on the runaway before the crash, according to Texas Department of Public Safety spokesman Sgt. Stephen Woodard.

"This is a good day. This is actually a day of celebration for a lot of people," Woodard told reporters on Tuesday.

'It is technology that saves lives'

Experts attribute the high rates of survivability during airline crashes to the use of more flame resistant cabin components such as fabric and padding, safer and sturdier seat designs and improved floor lighting.

"It is technology that saves lives, and it did in all four of these crashes," Schiavo said.

"One thing you can say for sure is that the evacuation rule and having an adequate number of aircraft exits and having materials that don't immediately catch fire in cabins with more flame resistant materials without a doubt saves lives, and that's been well documented," Schiavo said.

Schiavo said the first thing she does on a flight is to find the exits.

"When I board that plane, I note to myself and I say, 'My nearest exits are three rows up and two rows back,' or whatever they happen to be," she said.

"I know where the exits are. And I also always try to get myself as close as I can to an exit," she said. "And if I'm in an aisle and my exit is not an exit row then I look for my pathway to get out."

Schiavo also recommends keeping shoes on during a flight.

"Please wear sensible shoes and leave them on until after takeoff," she said. "I see people boarding with with flip flops and I think if you have to get up and run and you fall down or you can't run, you're not only going to hurt yourself, you're going to hurt dozens of other people on this plane. So get some shoes."