How a pair of raccoons (probably) broke into a bank 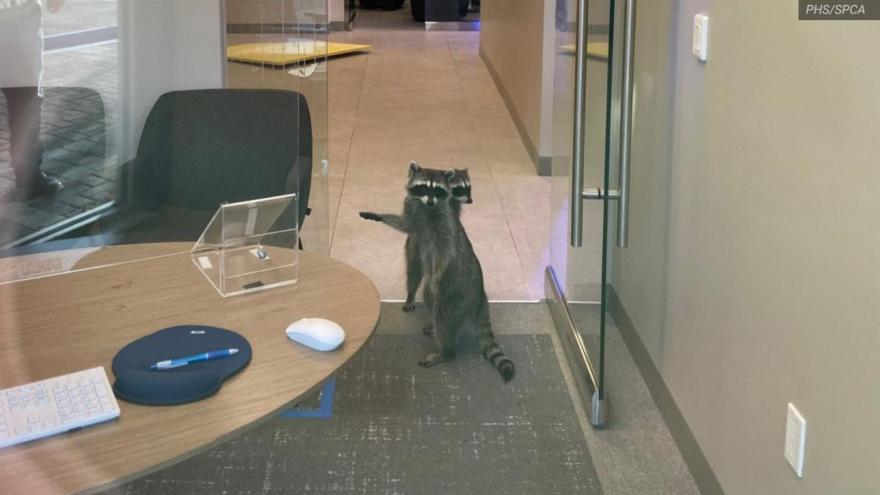 (CNN) -- Up a tree, onto the roof, and through the ceiling. That's how two raccoons likely managed to break into a bank.

And what they found inside was better than money.

"I guess they struck gold."

The two were spotted Tuesday morning after a man using the ATM at Peninsula Bank in Redwood City mistook one for a stuffed animal, the agency said in a news release.

"When our team arrived, papers were everywhere and they'd rummaged through the trash cans," Tarbox said. "There were several broken ceiling tiles on the floor and they knocked over a computer monitor."

The cookie bandits left the bank in disarray. But how did the young raccoons manage to break into a high-tech facility?

A tree leaning on the back of the bank's roof gave Tarbox a pretty good clue.

"There were muddy paw prints on a tree outside the bank, so we suspect the raccoons climbed the tree to the roof of the bank, and then somehow managed to crawl into the air ducts and fell through the ceiling tiles onto the floor of the bank," she said in the release.

It was not easy to get them to leave.

Rescuers chased the pair around for 10 minutes before finally shooing them away. In the end, the animals were safe and unharmed.

"It's not every day an animal organization gets called to deal with a bank break-in," Tarbox said in the news release, "but since the bank robbers were masked bandits of the wildlife kind, we were indeed the appropriate responders."