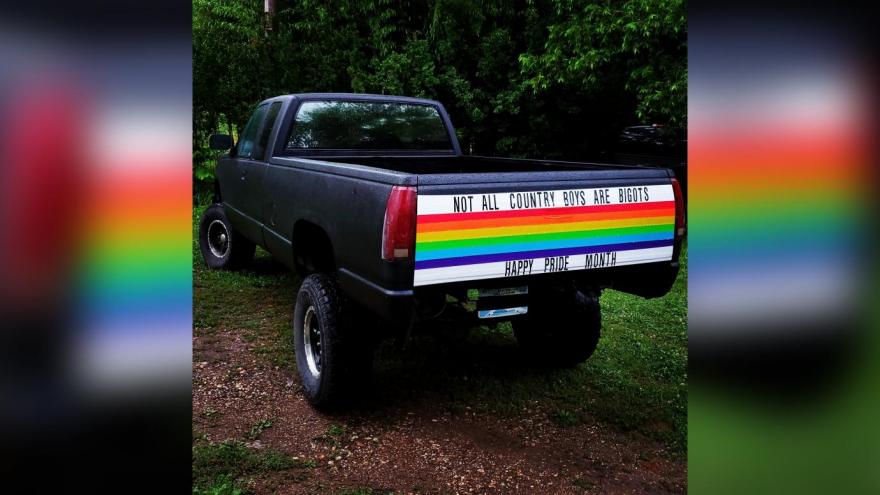 When Cody Barlow missed the Pride parade in Tulsa -- the closest celebration to his rural Oklahoma town -- he found another way to be an LGBTQ ally. Using duct tape and mailbox letters, he decorated the tailgate of his 1991 Chevrolet Silverado with a rainbow pride flag and a message:

(CNN) -- When Cody Barlow missed the Pride parade in Tulsa -- the closest celebration to his rural Oklahoma town -- he found another way to be an LGBTQ ally.

Using duct tape and mailbox letters, he decorated the tailgate of his 1991 Chevrolet Silverado with a rainbow pride flag and a message:

"Not all country boys are bigots... Happy Pride Month."

Barlow, 28, identifies as a heterosexual man. He has gay friends and relatives who have experienced hatred because of their sexual orientation, he said.

He wanted those people and others like them to know they're not alone, even in places where same-sex relationships are not the norm.

He shared a picture of his truck on Facebook on Thursday, hoping to encourage compassion. He did not expect it to be shared more than 70,000 times in four days, filling his inbox with messages of gratitude from around the world.

"I was trying to reach anyone it would help," he said. "People are sending me these stories, telling me what they've dealt with over the years, telling me they were tearing up and crying while reading this post."

"I didn't realize what kind of impact this was going to have."

Initially, though, the response was largely anti-LGBTQ, just as he predicted it might be when he posted the photo.

"I live in a rural area in Oklahoma, surrounded by small towns in every direction, and I'm sure this is not a very welcome message around here," he wrote on Facebook Thursday.

"Obviously doing this isn't going to change the minds of those who are intolerant, but hopefully it can help drown out the hatred with love."

His expectations were based on his experience growing up in a rural, predominantly Christian part of the state, he said.

"When I was younger, it seemed like everyone was the same. This is an area where everyone goes to church and nobody strays from the path," he said. "Over time, I started opening my mind more and seeing everything that was going on around me."

Where he lives now, people don't express anti-LGBTQ sentiment openly, he said, but he anticipated that it might come through on social media.

As hateful comments weighed down the post, he began to wonder if he'd made a mistake and considered deleting it.

Then, people started thanking him in the comments and sharing the post. Others messaged him privately with their own stories of experiencing hate and discrimination, and he had a change of heart.

"I realized that anything that comes my way doesn't affect me on a personal level in the same way it affects the LGBTQ community. This is the kind of stuff they have to deal with all the time," he said.

Now, the positive reactions far outweigh the negative ones, he said. And he's working on making appearances with his truck at Pride parades throughout the state the rest of the month, he said.

"Even if it helps one person, it's worth it," he said.