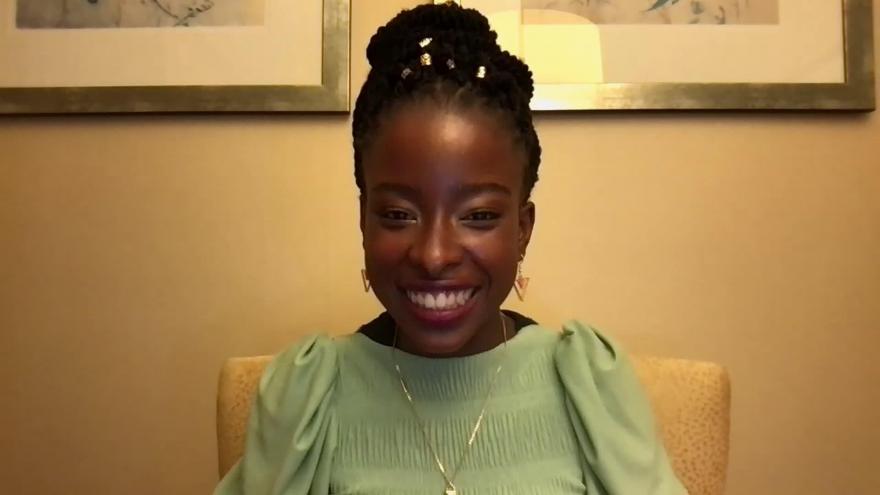 (CNN) -- You wouldn't know it from her commanding delivery at the inauguration, but up until a few years ago, National Youth Poet Laureate Amanda Gorman struggled to overcome speech impediment.

For much of her life, including when she was still an undergraduate at Harvard, Gorman had trouble pronouncing the letter "R."

To practice saying the letter, she'd listen on repeat to one song she said was "packed with 'R's'" -- "Aaron Burr, Sir" from Lin-Manuel Miranda's historical opus, "Hamilton."

"I would try to keep up with Leslie Odom Jr. (who played Burr in the original Broadway cast) as he's, you know, doing this amazing rap," Gorman told CNN's Anderson Cooper on Wednesday, following her triumphant inaugural performance. "I would say, if I can train myself to do this song, then I can train myself to say this letter."

Sure enough, rapping along with Odom Jr. and Miranda's fast-paced rhymes worked, and Gorman's performance of her piece, "The Hill We Climb," ranked among the highlights of President Joe Biden's inauguration.

Overcoming a speech impediment is a milestone she shares with the 46th President, as well as a love for "Hamilton" (the original Broadway cast performed at the White House while he was Vice President and reunited in 2020 for a Biden campaign video).

Gorman said she owes a lot to the Pulitzer Prize-winning musical, calling it "part of (her) speech pathology."

"It's why I included it in the inaugural poem," she told Cooper. "Also, beyond that, I think 'Hamilton' is such a great kind of American cultural piece of what it means to be a better country."

Gorman snuck in a few references to "Hamilton" in her stirring poem, some of which Miranda caught. He lauded her performance in a tweet.

"You were perfect. Perfectly written, perfectly delivered," he wrote. "Every bit of it. Brava!"

Politicians and cultural titans like Barack Obama, Hillary Clinton and Oprah Winfrey echoed Miranda's praise. In her fleeting moments on the inaugural stage, as Gorman called on the American people to summon the bravery it takes to "be" the light, she became a light for the country, too.