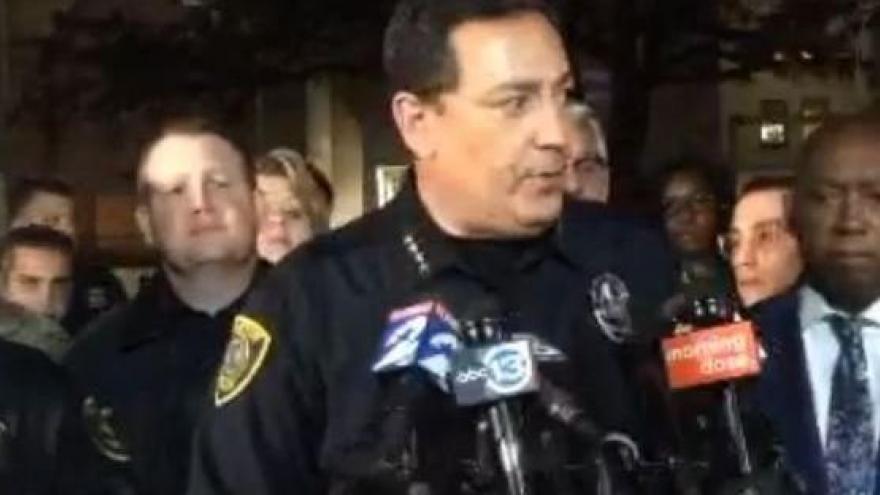 Houston police will do away with no-knock warrants, Chief Art Acevedo told residents at a testy town hall dealing with a drug raid that left two people dead and five officers hurt. (FILE)

(CNN) -- Houston police will do away with no-knock warrants, Chief Art Acevedo told residents at a testy town hall dealing with a drug raid that left two people dead and five officers hurt.

He did not provide the specific timing for implementing the policy.

He added that if suspects are "not dangerous, why don't we wait until they come out and get them when they come out of the house, right?"

The town hall came after Acevedo revealed that one of his officers will "more than likely be charged with a serious crime" after lying in a search warrant for a January 28 drug raid.

Officer Gerald Goines obtained a search warrant by using an unnamed confidential informant to confirm that drugs were being sold in the home police raided, according to affidavits obtained by CNN. The affidavits, dated February 14, detail the investigation after the raid.

Following the raid, Goines named his informants to investigators, but the informants told authorities they had not worked with Goines on this particular case, according to affidavits.

"It appears there are some material untruths and lies," Acevedo said. "No matter what we end up with here we know we have a criminal violation already -- and serious criminal violation -- by the individual that prepared that affidavit."

At the town hall, the chief faced angry residents who demanded accountability and transparency in the probe. Some said it wasn't the first time something such as this had happened.

Acevedo, who took the department's helm in late 2016, said no one was as "pissed off" as he was. His department has no tolerance for an officer lying under oath, he said. Previously, Acevedo said Goines, one of the officers injured in the shooting, will be relieved of duty when he's released from the hospital.

"That's why you're not hearing the other side. He's severely injured. He still can't speak clearly," DeBorde said, calling Acevedo's comments on the case irresponsible.

When narcotics officers breached the front door of the home on the evening of January 28, gunfire erupted almost immediately.

One of the suspects retreated to the back of a room and re-emerged, returning fire, police said. The second was shot while trying to wrestle a shotgun away from an officer, they said. Both suspects were killed.

Investigators discovered no heroin in the raid despite having said they previously purchased the black tar form of the drug at the home. Officers did find marijuana, five guns and a white powder believed to be cocaine or the painkiller fentanyl, Acevedo said after the raid.