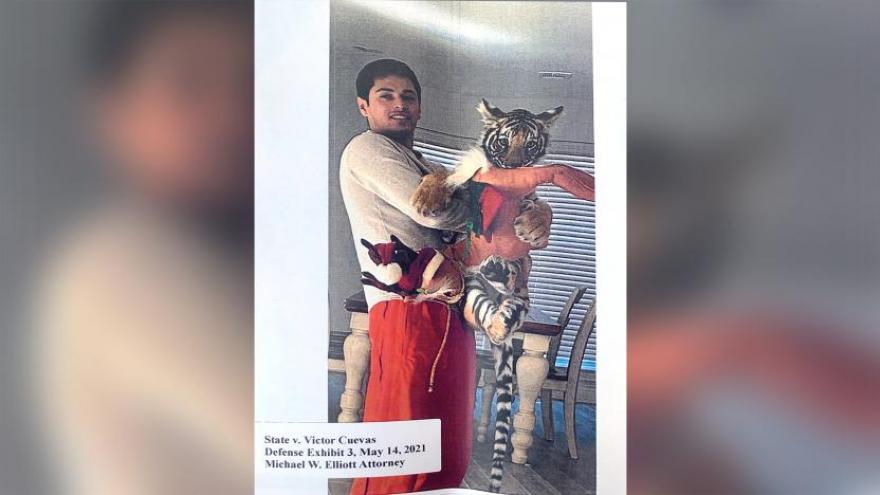 Victor Hugo Cuevas' attorney said his client did not own the tiger, but occasionally cared for it.

(CNN) -- A Bengal tiger that was missing for almost a week has been found, Houston officials said.

"We are happy to report that the missing tiger seen in a Houston neighborhood last week has been found and appears to be unharmed," Houston police tweeted.

Houston Police Cmdr. Ron Borza identified Gia Cuevas and her husband, Victor Hugo Cuevas, as the owners of the tiger during a Saturday night news conference.

Investigators fielded hundreds of calls in connection to the 9-month-old big cat named India after it was last seen in a west Houston neighborhood on May 9.

Whose tiger is this?

Gia Cuevas turned the tiger into authorities, Borza said. She is the wife of Victor Hugo Cuevas, who was the man last seen in public with the tiger.

That's in contrast to what Cuevas's attorney said last week, which was that the tiger did not belong to Cuevas. He said his client occasionally looked after the animal for its owner.

Cuevas claimed the tiger was his when it was seen on May 9, according to testimony Friday from an off-duty deputy named Wes Manion, who lives in the neighborhood where the tiger was seen with Cuevas.

Manion testified that he had his weapon trained on the animal in the yard of a home as he waited for police and that Cuevas came out and pleaded with him not to kill it. Cuevas told him, "That is my tiger," before grabbing it by the collar, kissing it on the forehead and taking it inside a house, the deputy said. Manion added Cuevas got into an SUV with the tiger and drove off, ignoring numerous commands to stop.

Cuevas later released a video through his attorney of him playing with the tiger as if it were a dog in what looks like a dining and kitchen area.

While Texas law does allow ownership of a tiger with certain restrictions, it's a violation of Houston law. Borza didn't say how the couple obtained the tiger, but noted Gia Cuevas said they've had it for nine months. She is not currently facing any charges.

When he was spotted with the tiger before it disappeared, Cuevas was out of jail on bond for an unrelated murder charge in Fort Bend County and on a separate charge of evading arrest earlier this year in Austin County.

He was arrested Monday and charged with felony evading arrest, according to police. He bonded out by Wednesday afternoon. On Friday, the state argued Cuevas violated bond conditions multiple times over the years, including when he was recently spotted with the cat. A Fort Bend County judge revoked Cuevas's bond on the 2017 murder charge, sending him back into custody.

The Cleveland Amory Black Beauty Ranch in Murchison, Texas, is taking in the tiger.

Noelle Almrud, senior director of the sanctuary, said India will enjoy a half acre of naturally wooded habitat, with a pool and trees, as well as a proper, nutritious diet.

Almrud warned against keeping animals like India as house pets. "They do not belong in people's homes, they belong in the wild and when they can't be in the wild," Almrud said, "we as a sanctuary are happy to step up and take them. We are always pushing for stronger laws in Texas that would ban this outright."

What would a modern tiger story be without a Carole Baskin cameo?

The founder of Big Cat Rescue and star of the Netflix series, "Tiger King," announced last week in a video posted to her Instagram account that she was offering a $5,000 reward to whoever safely handed over India to an accredited sanctuary and worked with authorities to convict whoever was involved in the buying and selling of the tiger.

Baskin told CNN last week that those in the neighborhood near the tiger were in "extreme danger."

"Tigers are hardwired to roam hundreds of square miles, so there's no cage that's going to be sufficient for them," Baskin said. "The only reason that people have tigers as pets is to try to show off to others."

Baskin said the off-duty deputy did the right thing.

"He kept eye contact, he backed away slowly. A tiger, if you look down, if you turn, if that neighbor had run back to his door, that triggers their instinct to kill," she said.