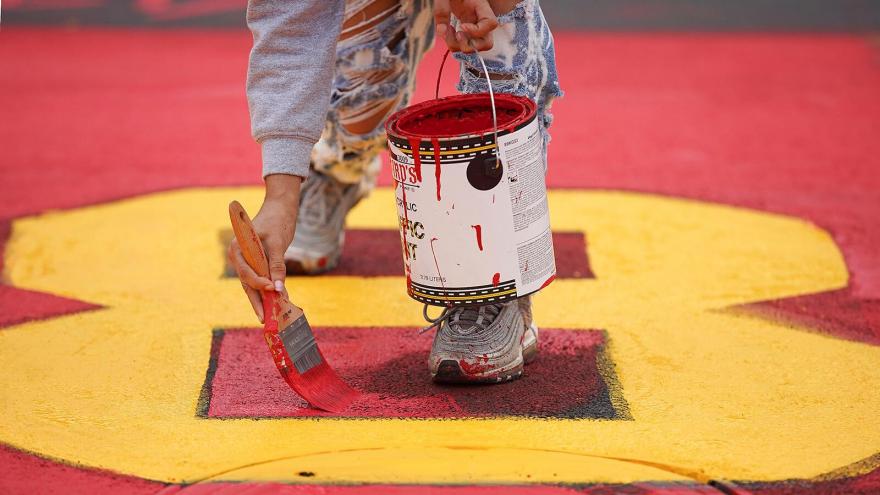 Brittany Torres works on the mural in front of Jack Yates High School in Houston on Saturday, February 6

"We come to celebrate the life and legacy of our hometown hero, Mr. George Floyd," Carl Davis, chairman for the Houston Society for Change, said during the dedication ceremony over the weekend.

Floyd, a 46-year-old Black man, died in May after a Minneapolis police officer knelt on his neck as Floyd pleaded he couldn't breathe.

The mural in his honor was commissioned by Harris County Commissioner Rodney Ellis, the Houston Society for Change, and 88 C.H.U.M.P., a non-profit social activism organization that was created by Floyd's football teammates, CNN affiliate KPRC reported.

The number 88 was Floyd's number when he played football at the high school, Davis said.

Davis called Floyd's life a "guiding light" in the community, adding it was important the mural be placed in front of the school, "to inspire students and give a voice to the struggle for social justice in Houston and the world."

In his own speech during the dedication ceremony, Ellis said it was especially important to have the unveiling during Black History Month.

"It's important for all of us... to say George Floyd's name," Ellis said. "But we don't stop there. The criminal justice in America and in Harris County is replete with racism, is replete with inequities and there are far too many people who look like George Floyd going to county jail who ought to be somewhere else."

The mural was created by artist Jonah Elijah, who is also an alum of the high school, with help from other volunteers, the Houston Independent School District said in a Facebook post.

According to Davis, Elijah's work is known for capturing "Black life in America and addressing controversial issues that affect the African American community."

After the mural was officially revealed, some of Floyd's football teammates and classmates released balloons into the air in his honor, a video posted by the school district shows.

"This is another public statement that the life and death of George Floyd is not in vain," Houston Mayor Sylvester Turner said.

"Because of his life and his death, reforms are being made... all over the country," the mayor said. "Even right here in the city of Houston, we are learning to do things better."