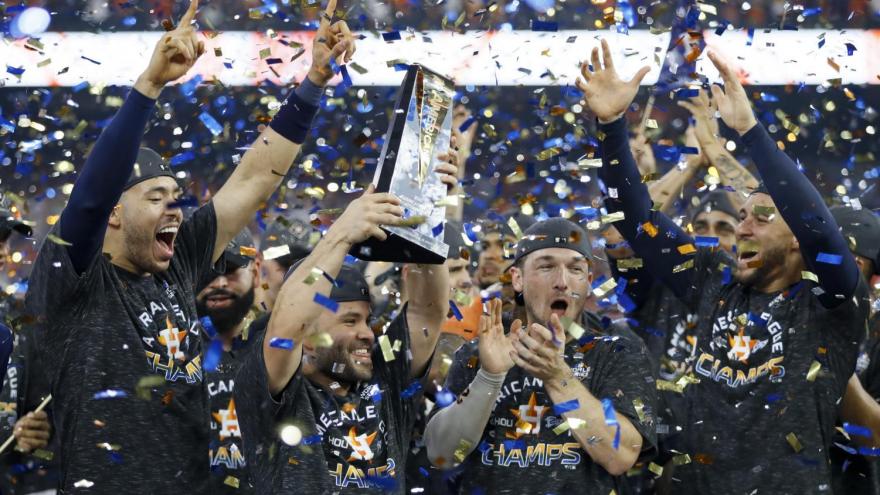 The Astros celebrate after beating the New York Yankees and earning a trip to the World Series.

(CNN) -- Three Houston Astros fans needed a security escort after they said they were hassled in the stands at Yankee Stadium, but they're getting the last laugh.

Their beloved team is getting ready for the World Series, and they're going, too, thanks to Astros pitcher Lance McCullers Jr.

Cruz Arcia Jr., Nathan Rocha and Kristina Contreras were in New York to celebrate a birthday and managed to get tickets to Friday's Game 5 of the American League Championship Series.

"We were able to get some tickets," Arcia told CNN affiliate KTRK. "And we've been to nearly every Astros home game for several years."

The friends, who were wearing Astros gear, were heckled when they got to their seats, but they told KTRK that things got tense as the game went on. One guy tried to start a fight, they said, and onlookers threw food and a beer at them before police and security led them away.

"We thought we were going to be removed from the stadium, but some other New York fans told them we'd done nothing wrong," Rocha told KTRK. They said they were escorted to new, much better seats behind home plate, so they could watch the rest of the game.

They told KTRK that some Yankees fans have apologized on social media for the way they were treated.

Video was seen by millions of people on social media -- including McCullers, who had surgery in June on his right elbow.

McCullers was able to get in touch with Arcia on Twitter and offered to give them tickets to a game if Houston made it to the World Series.

"Fans of all teams should be celebrated for loving the game, not treated like that. I look forward to having you watch a WS game in the H on me," he wrote Arcia on Twitter.

The Astros earned their spot in the World Series on Saturday with a dramatic 6-4 win over the Yankees.

McCullers tweeted on Sunday that he'd see the fans at Game 1 and told them to bring their orange.

The Astros will host the National League champion Washington Nationals on Tuesday evening.